Claude Oscar Monet was born on November 14, 1840 in Paris France, His father was a wholesale grocer and ship chandler which is how he provided for the family. Monet’s father and mother decided to move to Le Harve in 1845(Seitz, Pg 2). By the young age of 15 years old, Monet received a reputation as being a great caricature artist (Biography. com). The year 1857 was a tough period for Monet, because his mother died (Seitz, Pg 5).

Two years after his mother’s death, Monet moved to Paris against his father’s wished to pursue a career in painting.

While in Paris, Monet entered the the Swiss Academy of painting and became inspired by the work of Eugene Delacroix, Camille Corot, and Charles Daubigny (Biography. com). In 1860, Monet gets the honor of meeting Camille Pissarro and Gustave Courbet. It was during this time that Monet decided to take a break from painting and join the army in Algeria from 1860 to 1862.

After serving his time in the army, Monet picked up right where he left off and started painting again.

In 1865, Monet’s painting are submitted for the first time to the official salon where Camille Dondeux who was Monet’s lady friend at the time was featured in one of Monet’s paintings to be put on display(giverny. org). Monet’s first son Jean Monet was born in 1867 while he was in Sainte Adresse. One year after the birth of his son, Monet tried to commit suicide, shortly after his failed attempt at suicide, Monet receive a pension for this painting Mr Grauibert.

After the outbreak of the Franco-Prussian War (19 July 1870), Monet and Camille took refuge in England in September 1870. While there, Monet studied the works of John Constable and Joseph Mallord William Turner, both of whose landscapes would serve to inspire Monet’s innovations in the study of color. In the spring of 1871, Monet’s works were refused authorization for inclusion in the Royal Academy exhibition. In May 1871, he left London to live in Zaandam, in the Netherlands, where he made twenty-five paintings. He also paid a first visit to nearby Amsterdam.

In 1871, Monet’s father died and Monet returned to France. Monet lived in Argenteuil from December 1871 to 1878, Argenteuil was a village on the right bank of the Seine river near Paris, and a popular Sunday outing destination for Parisians this was the area where Monet painted some of his best known works. In 1874, Monet returned to Holland. It was during this time that Monet became recognized as one of the most honored and talented artist among the French painters because he was brilliantly successful in achieving the impression of a fresh view of nature (Seitz, Pg 9).

This was a huge honor to Monet, because he himself described his paintings as Metaphysical naturalism in which he states “I am simply expending my efforts upon a maximum of appearances in close correlation with unknown realities. When one is on the plane of concordant appearances one cannot be far from reality, or at least what we know of it…. Your error is to wish to reduce the world to your measure, whereas, by enlarging your knowledge of things, you will find your knowledge of self enlarged. ”(Seitz, pg 46) In 1874, Monet exhibits”Impression:Sunrise” at the first Impressionist exhibition in the studio of Nadar.

Monet’s second son Michel Monet was born in 1878 and the family settles at vetheuil in the company of the Hoschede family(giverny. org). Monet’s wife Camille dies in 1879, two years after her death Monet and his sons move to Poissy. In 1883, Monet rents a house at Giverny which is where he would end up staying for the next 43 years(Arnold, Pg 16) Monet marries Alice Hoschede in 1892 and also paints the Rouen Cathedral series. Monet painted several views of the views of the Japanese bridge, during this time he took several trips to London to work on and paint views of the Thames(Arnold, Pg 20).

In 1914, Monet had to suffer through the loss of another wife this time Alice Hoschede. Heartbreak would continue to follow Monet when his eldest son Jean died three years after Alice in 1914. During the years of 1916 to 1926, Monet worked on the twelve large canvas, The Water Lilies, which he offered to donate to France where the paintings were installed in an architectural space designed for them at the museum of the Orangerie in Paris France. Monet died of lung cancer on December the 5th in 1926 at the age of 86 and was buried in the Giverny church cemetery.

Monet had insisted that the occasion be simple; thus only about fifty people attended the ceremony(Arnold, Pg 25) His famous home, garden and water lily pond were bequeathed by his son Michel, who was Monet’s only heir, and to the French Academy of Fine Arts in 1966(Giverny. org). Through the Foundation Claude Monet, the house and gardens were opened for visit in 1980, following restoration. In addition to souvenirs of Monet and other objects of his life, the house contains his collection of Japanese woodcut prints.

The house is one of the two main attractions of Giverny, which hosts tourists from all over the world. In conclusion, Monet was one of the most known and respected French Impressionist artist in the world, who went through several ups and downs in his long career of painting. Monet created many pieces of artwork, but for most people his best painting was the “ Impression, Sunrise” painting which earned Monet the title “The father of the movement” and also the title and honor of being named the founder of the movement of Impressionist 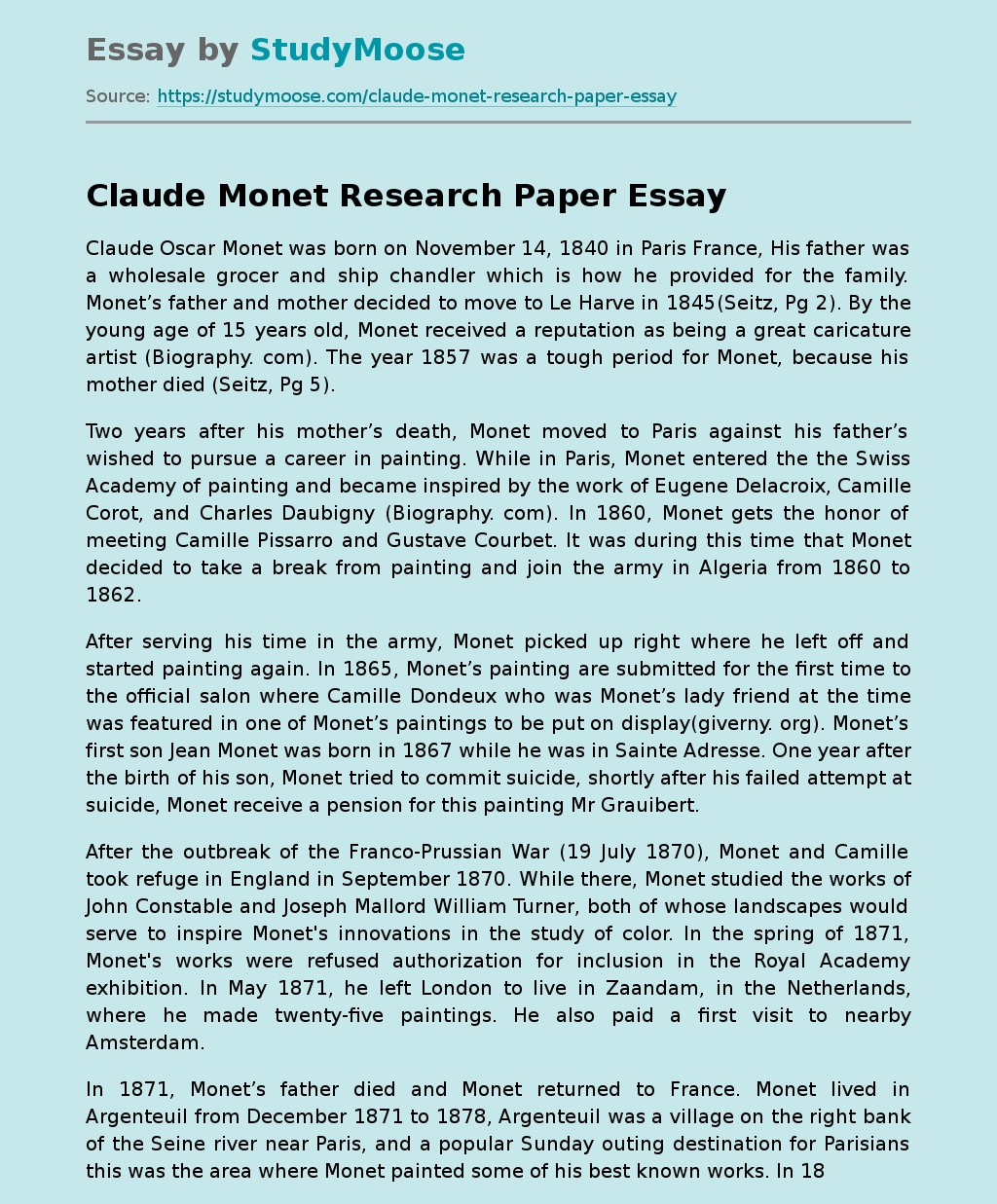