Class conflict is represented throughout the play, A Streetcar Named Desire in various ways through characters, symbols, ideas and language. Characters such as Blanche, Stella, Mitch and Stanley are used throughout the text to represent the upper and lower classes, as well as the conflict between the two classes. Symbols, ideas and language help to define the different classes as well as helping to represent the conflict between classes. The language (dialogue) of the characters, symbolic use of names, animal imagery and colour (clothes) and the ideas of cultural capital help to define what the lower and upper classes are.

Don't use plagiarized sources. Get your custom essay on
“ Class conflict in A Streetcar Named Desire ”
Get custom paper
NEW! smart matching with writer

A Streetcar Named Desire by Tennessee Williams was written in 1947. The story takes place in New Orleans, and can be read as being during any year between May and September. The story revolves around Blanche Dubois and her conflict with Stanley Kowalski. Blanche’s character represents the old aristocratic south and the upper class of the play through her manner and cultural capital (her education and sophisticated dialogue).

She’s cultivated and bound by heritage (Belle Reve) and tradition. The upper class is associated with intellectual strength. Stanley represents the new industrial south and the lower class of the play through his job at the steel mill, use of slang and his ignorance.

His society is based on force and ingenuity. The lower class is associated with physical strength. From the beginning, the conflict between the two classes is prominent. The working class is predatory and survives and triumphs with two elements, which the upper class lacks, vitality and strength.

The conflict of class is evident and we see how Blanche and the old south are fragile, and it’s only a matter of time before Stanley, the new south crushes it’s opposition.

Class conflict is effectively represented through clothes and the symbolic use of colour and animal imagery. The conflict becomes evident during the first scene when we first meet Blanche and Stanley. Blanche is dressed in her white proper clothing (“…She is daintily dressed in a white suit with a fluffy bodice, necklace and ear-rings of pearl, white gloves and hat…” Scene One), whilst Stanley is dressed in dirty denim work clothes (“…roughly dressed in blue denim work clothes… carries his bowling jacket…” Scene One). Blanche is often dressed in white, pale, timid colours, whereas Stanley is dressed in bright bold colours. Stanley’s bright colours overpowers Blanche’s pale colours. Blanche is symbolised as the aristocratic moth and Stanley the common cave man. The symbol of colour helps the reader construct the inevitable doom of the fragile upper class (Blanche) by the strong lower class (Stanley). These symbols of colour and animal imagery related to each character, helps reinforce the conflict between the Old South (upper class) and the New South (lower class).

The language (dialogue) of each character and symbolic use of names help in constructing ideas of class conflict in this play. Blanche speaks in a quiet, refined voice and uses sophisticated language (“…- Only Poe! Only Mr Edgar Allan Poe! – could do it justice!” Scene One, Blanche). This constructs Blanche to be fragile and vulnerable, with the cultural capital of sophistication. Blanche uses her speech on a high level, searching for values and reflecting education in her manner. Stanley yells and hollers and uses unsophisticated language. (“[Bellowing]: Hey, there! Stella, Baby!” Scene One, Stanley) Stanley’s speech is often dotted with exclamations and short, to the point sentences. Stanley uses his speech to express his wants, likes and dislikes. This further constructs Stanley as loud and strong. Blanche is shown to be singing throughout the text, which in turn aggravates Stanley. This further shows the conflict between the two characters through language (dialogue).

The use of names in this play helps in constructing the separate classes. The names Blanche Dubois and Stanley Kowalski help construct different representations of class. The name Blanche means white and creates the irony of Blanche not being as white and pure as her name represents. In contrast the name Stanley offers no specific meaning in relation to meaning in the play. Secondly the name Dubois sounds aristocratic, with a possible proud heritage, whereas the name Kowalski sounds more modern. A Dubois speaks softly and flittingly, as the name is pronounced, whereas a Kowalski speaks loudly and brutally as the name is said. Kowalski’s enjoy loud, rowdy poker parties, whilst Dubois’s wince and prefer teas, cocktail parties and luncheons. The names of these two characters help in constructing the conflict between the two classes. The dialogue of Blanche and Stanley and the symbolic use of names help to construct class conflict in the play, A Streetcar Named Desire.

Stella represents the old south being converted by the new south. Blanche fights for Stella to come back and be part of the old south again, accusing Stella of being blinded by desire for Stanley (“What you are talking about is brutal desire – just – Desire!” Scene Four, Blanche). Elysian fields is described as having an atmosphere of decay. This scenery is contrasted to the image of white pillars at Belle Reve. This contrast is to highlight the difference in the world Stella has chosen (lower class lifestyle), and the world she was brought up in (upper class lifestyle). Colour is used by Stanley to keep Stella part of the new south. (“…You showed me the snapshot of the place with the columns. I pulled you down of them columns and how you loved it, having them coloured lights going!” Scene Eight, Stanley). The class conflict between Blanche and Stanley is evident, through them trying to convert Stella.

The use of language in the play works effectively to define between the two classes. The lower class is associated with slang, whilst the upper class is associated with sophisticated language. The symbolic use of names, animal imagery and colour are important in also contrasting between the two classes. Finally the idea of cultural capital works in highlighting the class conflicts between the upper class or old south and the lower class or new south. In A Streetcar Named Desire the conflict of class is evident and we see how Blanche, the aristocratic south is fragile, and it’s only a matter of time before Stanley, the industrial south destroys every shred of Blanche, the old south. 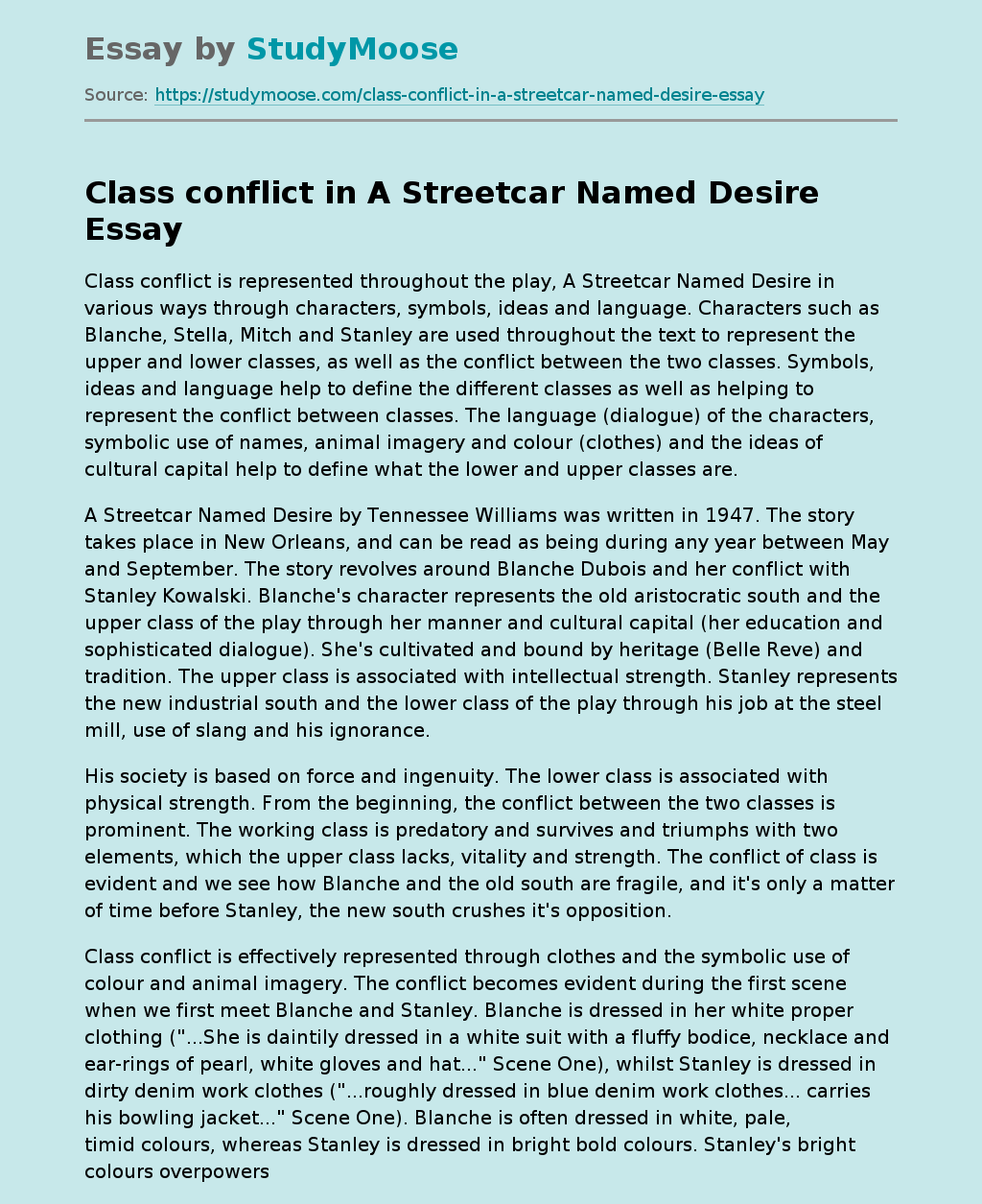