Civil Disobedience: What Is It

“If the injustice is part of the necessary friction of the machine of government, let it go, let it go: perchance it will wear smooth–certainly the machine will wear out… but if it is of such a nature that it requires you to be the agent of injustice to another, then I say, break the law. Let your life be a counter-friction to stop the machine. What I have to do is to see, at any rate, that I do not lend myself to the wrong which I condemn,” states Henry David Thoreau.

Don't use plagiarized sources. Get your custom essay on
“ Civil Disobedience: What Is It ”
Get custom paper
NEW! smart matching with writer

Civil disobedience is the refusal to comply with certain laws or to pay taxes and fines , as a peaceful form of political protest. Over many years, civil disobedience has been used to make change in the United States of America. It has been used during the Boston Tea Party, the Women’s Suffrage Movement, the abolition of slavery,the creation labor unions and child labor laws, and the civil rights movement.

What is the purpose of a law if it is not just? During the past, civil disobedience has been used as moral responsibility to disobey unjust laws.

Unjust laws have been used to restrict people due to race, gender, religion, and sexuality. In many situations, legal attempts to stop unjust laws have failed which lead to the continuation of injustice. Jim crow laws were laws that were unjust and enforced segregation in the south. In many cases people attempted to end these laws. For example, Plessy v. Ferguson allowed segregation but ruled separate but equal. However, things were still not equal allowing this injustice to continue. African Americans from the south then used civil disobedience to push for integration and equality. Civil disobedience allowed the people to fight for just laws.

In many ways, civil disobedience has been used to publicize many issue for people who are suffering. Martin Luther King Jr. once said,”An individual who breaks a law that conscience tells him is unjust, and who willingly accepts the penalty of imprisonment in order to arouse the conscience of the community over its injustice, is in reality expressing the highest respect for the law.” This simply says to bring light to injustice you might have to break a few unjust laws.. However, people may say civil disobedience is a way to break the law and create chaos. This is not true for most. The chaos is caused when justice is not being served to the people as the government refuse to hear the people loud cries for help. Civil disobedience is not used to create chaos. It is used to prevent more chaos that is to come.

Civil Disobedience: What Is It. (2021, Mar 10). Retrieved from http://studymoose.com/civil-disobedience-what-is-it-essay 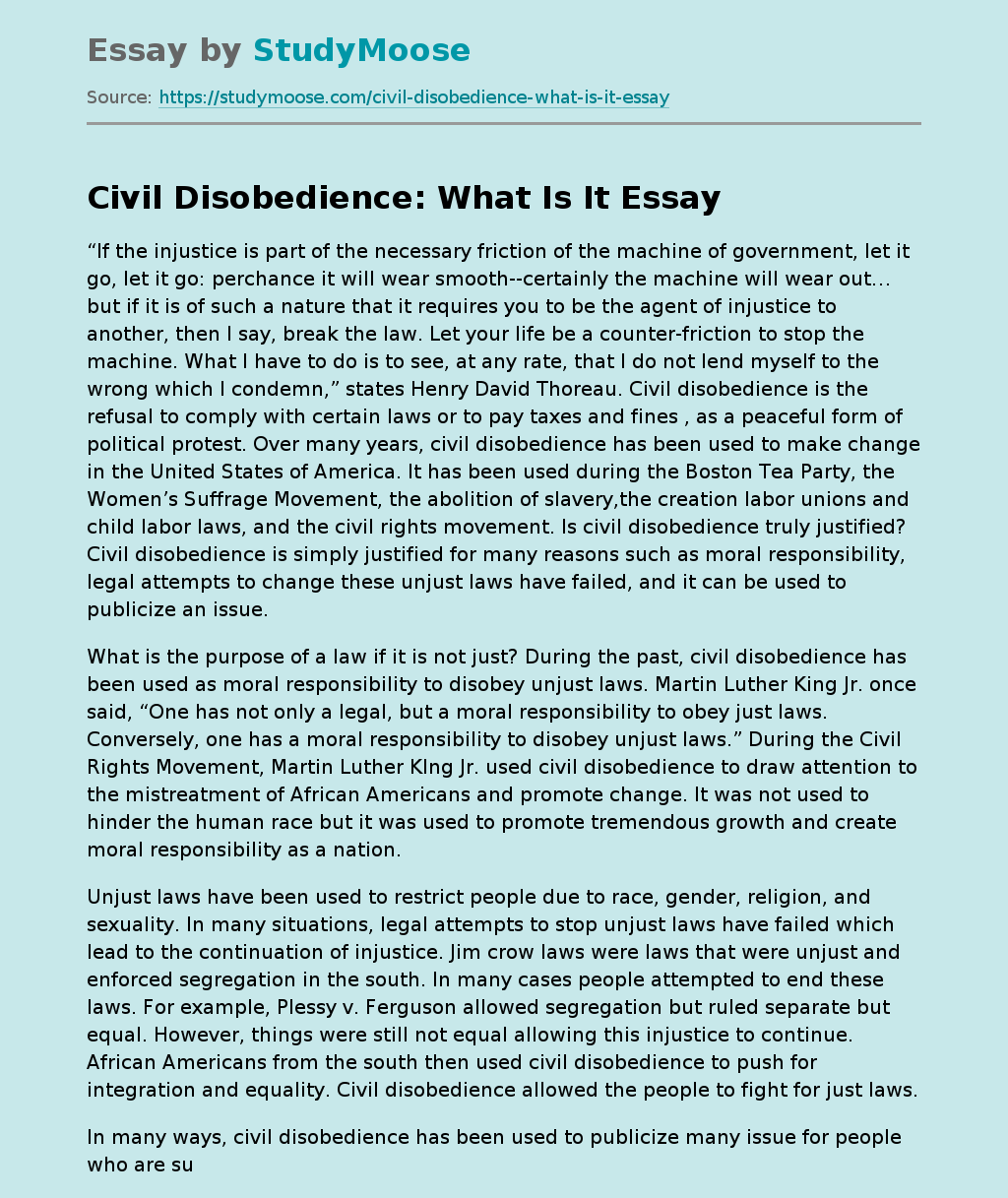