Cities in the LEDC'S which suffer severe air pollution

Most cities suffer from air pollution it varies both spatially and temporally. Cities in the LEDC’S suffer severe air pollution due to the rapid growth in population and increases in motor vehicles and industrialization. This is also made worse by a lack of legislative controls on the sources of pollution and inadequate policing and enforcement of laws to control emissions. For example Mexico City has the worst records for air pollution. This is caused by the site of the city is in a basin surrounded by mountains compounds the problem.

Don't use plagiarized sources. Get your custom essay on
“ Cities in the LEDC’S which suffer severe air pollution ”
Get custom paper
NEW! smart matching with writer

The Smogs are frequent as pollutant are trapped in the basin under high pressure conditions and temperature inversions frequently form. The greatest contributor to the pollution is motor vehicles which generate 97% of the carbon monoxide and 66% of the nitrogen dioxide. As well 35,000 industries also make a significant contribution. Many are old and unregulated and pump out large amounts of pollutants including lead. This has lead to 3000 deaths a year are attributed to poor air quality.

Also the smogs have been so severe that schools have been closed for a month.

However in MEDCs the enivironmental problems of air pollution is variable compared to LEDCs for example Los Angeles is one of the most polluted cities in the world with unhealthy air quality on more than one third of the days in a year. This again is due to it being located in a basin between the mountains and the ocean, the low lying basin has many days of low wind speeds, hot sunshine, descending air, low rainfall and low level temperatures inversions which is ideal conditions for smog.

Furthermore on about half the days in the year a temperature inversion exists which is low enough to trap the pollution and cause petrochemical smog.

As well Los Angeles grew up on the assumption that the automobile is king traffic in the metropolitan area increase by a third between 1990 and 2000 and is expected to rise by 50% in the next 10 years. This has resulted in a brownish yellow haze which is painful to the eyes and nose and harmful to general health. To some extent London has the same environmental problems as LEDCs like Mexico city. In London high pressure conditions lead to a temperature inversion trap concentrations of pollutants. Furthermore the hot sunny weather in summer creates high ozone levels and photochemical smog.

However even though there has been a fall in the levels of air pollution which was caused by sulphur dioxide and smoke, the rise in motor transport and emissions of carbon monoxide and nitrogen oxides has led to the return of smog. This has resulted in the London smog of 1952 lasted from 5-9 December. For 48 hours visibility was reduced to 10 metres. It caused 12,000 deaths. As well smog occur in winter and there are high ozone levels in summer. In December 1991 London Nitrogen Oxide levels peaked at 423 ppb 2x who safe limit of 209ppb. 60 deaths due to smog. There has also been serious health problems such as asthma. In the Uk 3 million suffer from asthma, 7 million working days are lost, costs NHS i??1 billion, 14% school children affected. A number of schemes have been introduced in both the LEDCs and MEDCs but they are very different. In Mexico City which is an LEDC they have introduced a colour coded permits allowing vehicle access into the city on certain days which has reduced the number of vehicles by 400,000 a day. Air quality improved by 15%.

As well taxis over 10 years old have been replaced and lead petrol has been cut by 50%. However in MEDCs like Los Angeles they have different solutions such as regulations from governing everything from the use of motor mowers, furniture polish and vehicle emission. There has been a Mandatory state wide introduction of cleaner burning gasoline (CBG) introduced in March 1996 California Environmental Protection Agency says this reduced ozone forming emission by 15% the same effect as removing 3. 5 million cars from the road.

This fuel was the most important advance sine the introduction of the catalytic convertor. Furthermore in London the Clean Air Act (1956) and control of emissions from homes and factories. There are also variable speed limits on M25 to keep traffic jams to a minimum. Red routes where stopping is prohibited to reduce exhaust fumes. There are also pedestrian schemes as well the introduction of trams between Croydon and Wimbledon. Furthermore there are congestion charges which also reduce traffic charges. As well they have improved Underground and public transport to reduce the volume of cars.

However with the environmental problem of water pollution is very different between MEDCs and LEDCs. In MEDCs domestic water needs to have no smell, no colour, no unpleasant taste and no pathogentic bacteria. The need for high quality water water for domestic consumption conflicts with the lowering of water qquality caused by waste disposal from both domestic and industrial users of water. In many MEDCs including the UK there have been huge improvements in water quality in recent years due to stricter legislation and improvement works by the environment Agency and Water Authorities.

In addition the urban areas are the main source of water pollution are sewage, manufacturing industry and power stations. In addition agricultural areas upstream of urban areas may contribute excess chemicals in runoff from the application of fertilizers, pesticides and herbicides. Cattle slurry and silage may also leak into rivers and streams. Furthermore in MEDCs most sewage is transported via the drainage systems to treatment works where it is cleaned before reentering watercourses. However, some old treatment works are inefficient and until recently raw sewage was sometimes emptied directly into rivers or the sea.

Occasionally there are also leaks of raw sewage especially when drains overflow during a flood. However in towns and cities in the LEDCs are often less well served by sewage systems especially when there are large expanses of squatter settlements. Which is like the river Ganges which is one of the worlds most polluted rivers. A report by scientists and environmental specialists stated that everyday 350 human corpses, 1500 tonnes of wood and almost the same weight of animal carcasses are thrown into the river ganges.

This is despite the rivers importance for irrigation, washing and drinking and its role as a sacred place for religious purification. As well in LEDCs water pollution often reaches dangerous levels making water unfit for human consumtion. Sewage making water unfit for human consumption. Sewage entering rivers is broken down into ammonia by the action of bacteria. However large quantities of oxygen are used up in the process, which reduces the number of organisms that can survive in the water.

Bacteria break down the ammonia forming nitrates that lead to the eutrophication of rivers and algal blooms . The growing algaoe use more of the oxygen and block out the light. This kills all river life. Furthermore Manufacturing industries are often located close to water sources and may use sopious amounts in manufacturing finished products and for cooling processes. Water used for colling is often returned to the river at a higher temperature and while this does not create a health risk to people it may alter the ecosystem of the river as some species cannot withstand the warmer conditions.

The high incidence of malformation has been traced to nearby industries dumping heavy metals such as lead and mercury into rivers. The pollutants are then concentrated through the food chain eventually affecting people trough their consumption. As well the management strategies between MEDCs and LEDCs are very different in The river Ganges they are building water treatment works to purify water before being returned to the river. As well recycling of gas and fertilizer from wastes and buildings of dams to isolate soiled waters.

Furthermore they have introduced cheap sanitary programmes and educating the population about the serious pollution problem. However in MEDCS like Teesside improvements are made to industrial and sewage discharges which have dramatically improved dissolved oxygen levels cut levels of ammonia and reduced the presence of toxic chemicals in the water. As well the BASF is installing new process equipment which will reduce their releases of ammonia by 33 %. This has lead to new improvements to the area.

Cities in the LEDC'S which suffer severe air pollution. (2020, Jun 01). Retrieved from https://studymoose.com/cities-ledcs-suffer-severe-air-pollution-new-essay 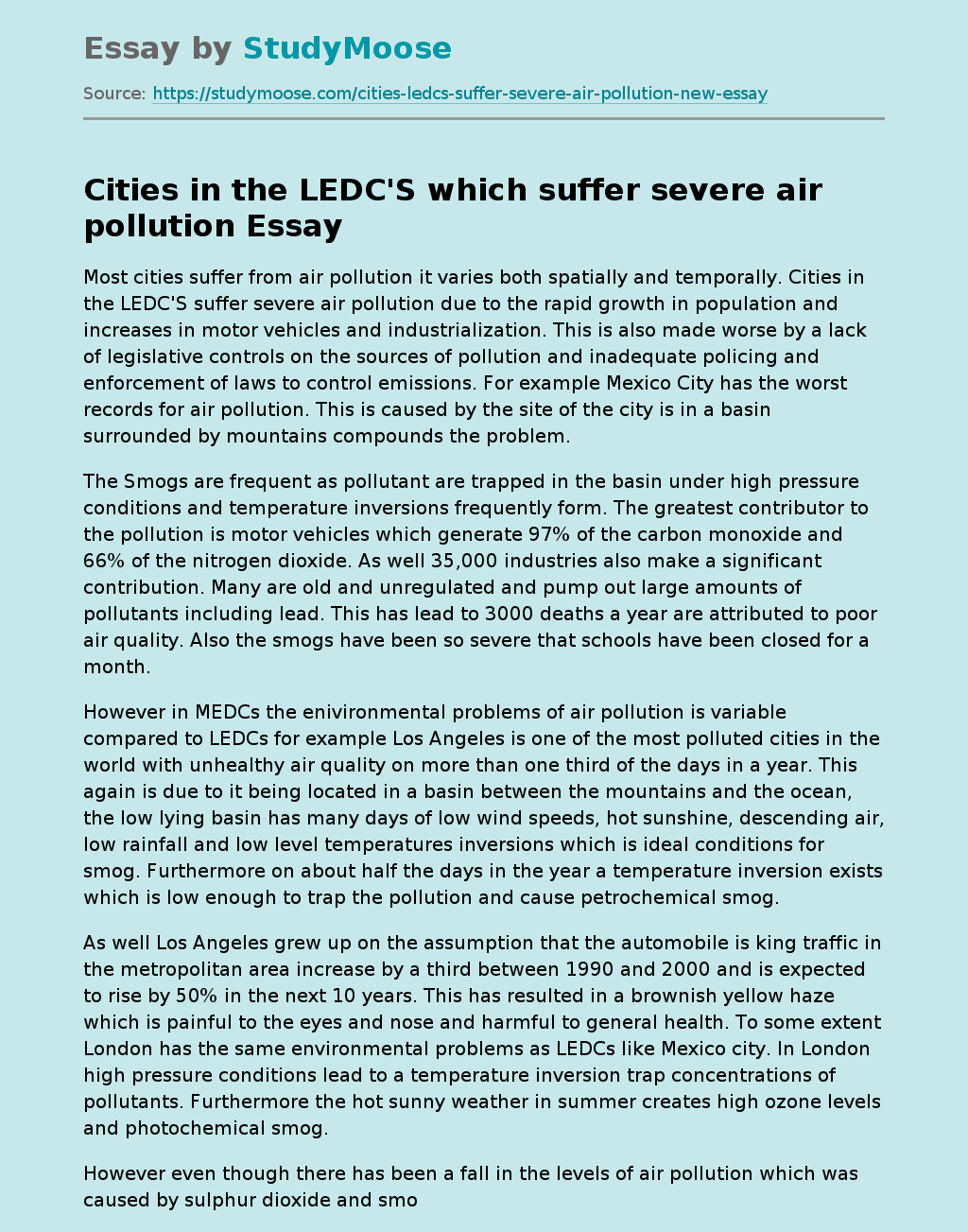