From generation to generation stories are always changing. Fairy tales like Cinderella go from mean step sisters to nice sisters, fairy god mother to a tree. After reading 5 different versions of Cinderella I had to choose which I would decide to read, above the others to my favorite child. After difficult thinking I have chosen the Walt Disney’s version of Cinderella for many great reasons. I have chosen the Walt Disney’s version because I feel it is the most fitting for children over all the others which are best suitable for older teens.

Don't use plagiarized sources. Get your custom essay on
“ Cinderella Argument Paper ”
Get custom paper
NEW! smart matching with writer

Walt Disney’s version is the ideal story beginning with “Once upon a time” and ending with “lived in the palace and were happy ever after, too”.

The fairy tale story of pretty girl by the name of Cinderella who lived with her step mother and 2 step sisters who treat her horrible having her cook, clean, and bake, meanwhile having no rights to do anything without her step mother’s permission.

A great ball was given by the king, for the prince and every young girl in the kingdom were invited, even Cinderella… Although the nasty step mother told her no. Cinderella cried her heart out, until an older woman appeared in front of her telling her, I am your fairy godmother and she said “You are going to the Ball”. Before you knew it with the powers of the step mother Cinderella was beautifully dressed and a coach pulled by horses was ready to take her.

Cinderella was told that at the stroke of midnight the powers would be gone and she would, means she would have to be gone. Although no one knowing who she was, she caught the prince’s eye. Forgetting to keep her eye on the clock, at 12 she rushed out losing one of her glass slippers. Every girl in the land tried hard to fit into her lost slipper, until Cinderella was forced to try it on, and it fit her perfectly. Cinderella became the prince’s bride and lived happily ever after.

All similar, but yet different, In “Cinderella”, by Anne Sexton there are minor differences that pointed out to me making me not choose this particular story for my child. Besides the story being set up like a poem, I found this to be more difficult for a younger child to understand. This story starts off stating 4 extremely short but successful stories then leading into Cinderella which in my opinion isn’t needed to understand the story. As the story goes on in line 32 they refer to Cinderella looking like Al Jolson, which no kid would understand causing another story within a story about who Al Jolson is.

In Walt Disney’s Cinderella, Cinderella is forced to try the slipper on, after her sisters try it on and are unsuccessful. In both “Cinderella” by Anne Sexton, and “Cinderella” by Jakob and Wilhelm Grimm, the step sisters decide to cut body parts to fit into the slipper. One cutting a toe off and the other cutting part of her heel off, until not long after, with help from the fairy god mother, or Cinderella’s mother that the prince finds out. I feel that blood and cutting off body parts because you don’t fit the characteristics you want so you can be with a man isn’t a good trait to teach your children.

Clearly you can now understand why I have chosen what I have. After reading all 5 wonderful versions, Walt Disney’s Cinderella adapted by Campbell Grant is the best for any child, especially mine. After reading a happy story there is a lot less you’ll need to explain to your child that is unnecessary to be explained to until they are older. The Walt Disney’s version I feel it is the most fitting for children over all the others which are best suitable for older teens. 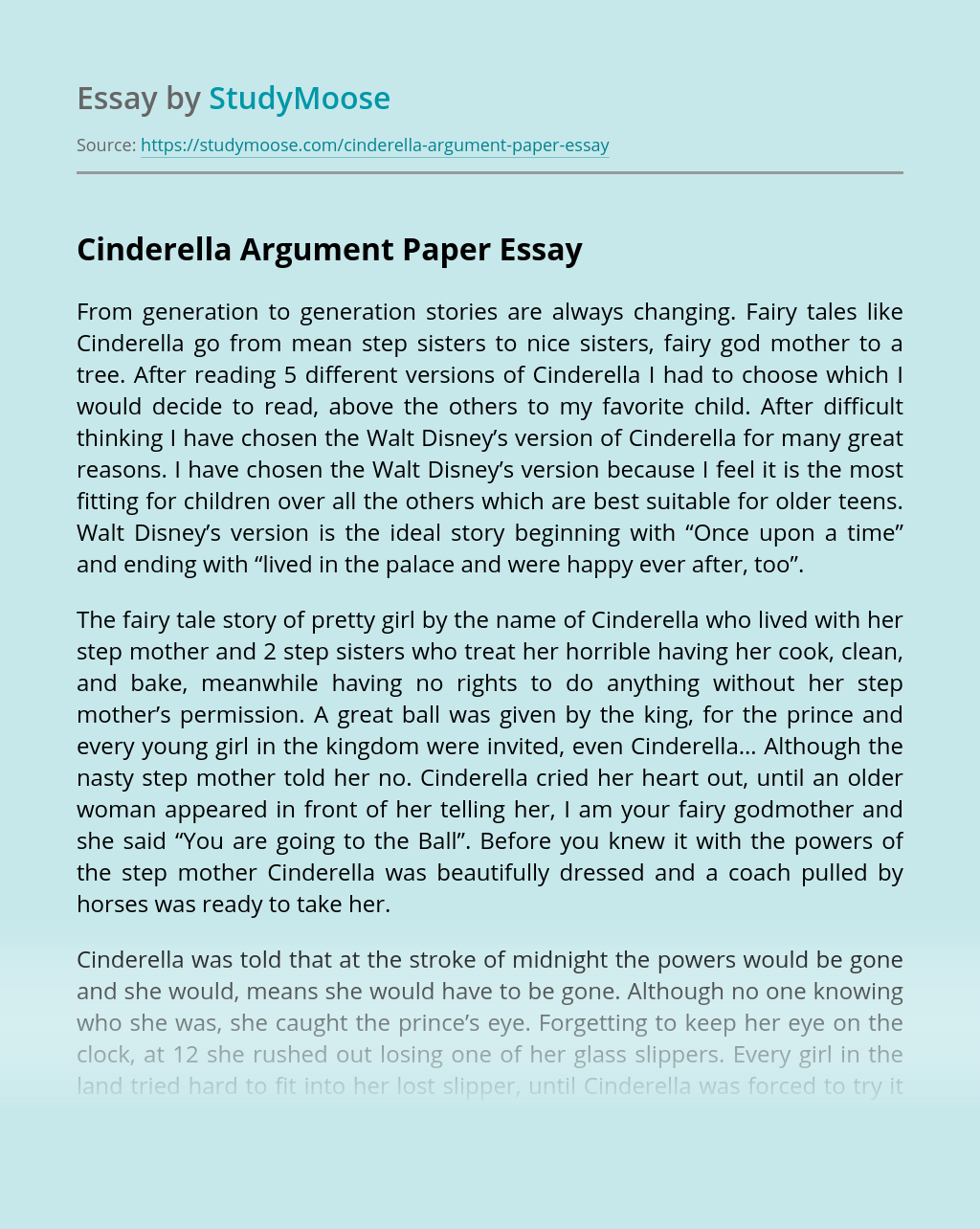