Why Many Adults Enjoy Animated Movies?

For example, we know that ‘Popeye the Sailor Man’ was a great animated cartoon that mesmerizes all kids, and on top of that, adults also enjoy it.

Turn in your highest-quality paper
Get a qualified writer to help you with
“ Why Many Adults Enjoy Animated Movies? ”
Get high-quality paper
NEW! AI matching with writer

It is an animated cartoon that was created back in the year 1919 which was created by Elzie Crisler Segar. Nowadays, ‘Popeye the Sailor Man’ still being played and get more new generation viewers. Being an adult is a difficult phase of life, thus, the adults may want to release their tension or stress by watching the animated movies.

Childhood can be a good time to many, and seeing animation or cartoon from the past or even present make them feel like a kid again.

Often, there are jokes and deeper message that the adults didn’t catch when they were kids that they can get now. Adults also wants to spend more time with their love one, and by doing that, their bonding with the children can be strengthen. Adults enjoy animated movies because of characterization. Characters of an animation play an important role for us to be in love with the movies.

For example, in ‘SpongeBob Squarepants’, I definitely love the character of Patrick, who is a starfish. He got something unique about his character, and most of the time, he was loyal and always be there for SpongeBob no matter when. The characters have their own distinctive attitudes, modes, temperament that can make the adults fall in love with a character itself and therefore, they will continuous watching the animated movies as it can bring fun. Some of animated movies create a character that is much likely to be more in human perspective.

Perhaps, some character of animated movies can relate to the adults viewer and making them enjoyed when watching the movies. Adults enjoy animated movies because of moral lesson. Most of the animations movies create have their own moral lesson. It is like having fun and in the same time, a lesson is given to the viewers to think and make a wise decision. The moral lesson is not only targeted for children, but instead, the adults also can get a great benefit from watching it.

For example, in the animated movies produce by Disney, Ratatouille had shown a great moral lesson to viewers to be interpreted. Basically, it teaches us that we cannot judge a book by its cover because anybody is capable of doing anything, and if we interested in something, we should go and do it. The moral lessons in animated movies benefit the adults by reflect and interpret the ending of the story. In conclusion, many adults enjoy animated movies because of moral lesson, characterization and their nostalgia.

Why Many Adults Enjoy Animated Movies?. (2016, Dec 10). Retrieved from https://studymoose.com/why-many-adults-enjoy-animated-movies-essay 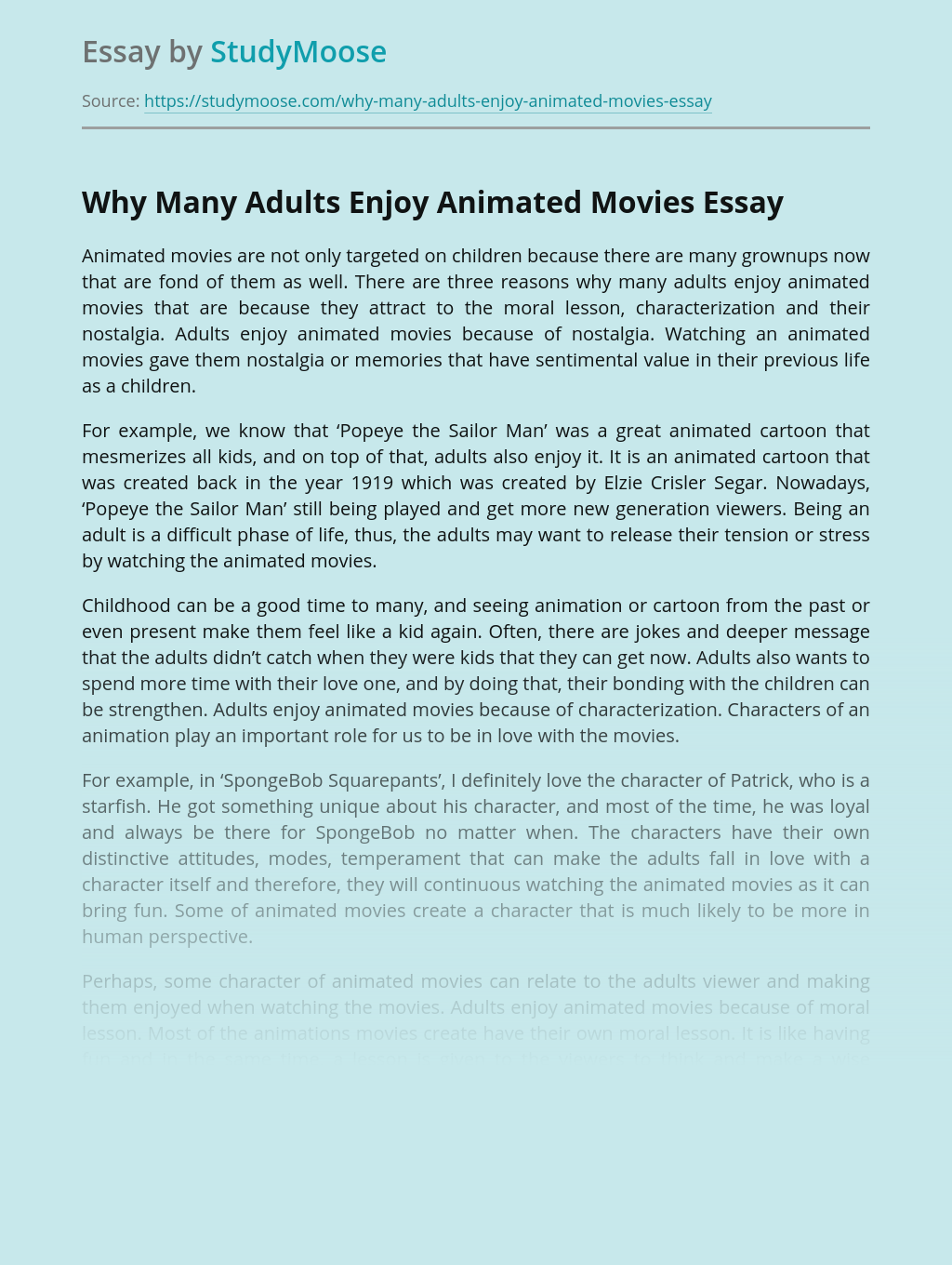 Turn in your highest-quality paper
Get a qualified writer to help you with
“ Why Many Adults Enjoy Animated Movies? ”
Get high-quality paper
Helping students since 2015
Stay Safe, Stay Original