Christianity and Paganism in Beowulf

The literature of a period is often regarded as the purest manifestation of the social, political, and cultural atmosphere of a particular era. At a crossroads, often than not, these works narrate the development of a culture besieged by new ideas and influences. Considered as the earliest extant poem in a modern European language, the Germanic epic entitled Beowulf is a clear example of how two warring cultural ideologies are melded together to create a population’s own unique social identity.

Peppered with pagan images of magic and monsters, one would almost immediately assume that the poem was created as an account of heroism in the likes of Greek myths and epics, but it is easy to acknowledge that the over-arching motive that pushes the narrative is the relationship of the people with their new God, the Higher Being proclaimed by the burgeoning Christian religion. Taking this into account, one could easily characterize Beowulf as the product of “folk Christianity”—the reconciliation of the newfound religion of Christianity and traditional paganism, a melding that suited the culture of the Anglo-Saxon people.

The sense of paganism in Beowulf can be easily attributed to the prolific existence of otherworldly monsters and supernatural events in the text. Revolving around the three “monsters” portrayed in the poem—the man-killing Grendel, the vengeful witch of the marsh that is his mother, and the dragon that would be the catalyst to the end—these characters or images portray a Scandinavia that was overwhelmed by a wide array of mythological creatures that wreck havoc in the small communities, a Scandinavia of pagan lore.

But amidst this, a hero called Beowulf would appear from the distance, a Christian “savior of mankind”, to expunge the lands of these vicious beasts. From this mere premise we immediately assume the tension that exists between the two different ideologies: Beowulf exemplifies the new order of Scandinavian warriors, those that follow a new God but still abide by their traditional beliefs, while the monsters symbolize the mayhem and destruction of paganism.

Such dynamic was taken advantage of by an anonymous medieval monk who had put the story of Beowulf on paper, showing the power of Christianity over paganism. An earlier example of a “pagan” monstrosity and Christian heroism found in the text is Beowulf’s battle with Grendel. The monster had been terrorizing the lands of Hrothgar, and news of this had spread throughout the land. It is interesting to note that Grendel has been described as “Conceived by a pair of those monsters born/ Of Cain, murderous creatures/ Banished by God, punished forever for the crime of Abel’s death (line 105-108).

” This portrayal of the Christianity’s first murder pushes further the idea that those of the supernatural and pagan element are, as Grendel is shown, “banished by God”. Beowulf arrives at Hrothgar’s land, a warrior of epic capacity, and lends his service albeit for the price of wealth and fame. He destroys this monster with no weapon at hand, and gains the respect of the people—clearly showing the power of Christianity over paganism. Another aspect of Christianity that is liberally addressed throughout the text is the concept of Christian fate.

When our heroes talk of God, they do so in acknowledgement of His all-encompassing power and dominion. Lines such as “’twas the judgment of God”, “Blessed God”, and “the mercy of God” can be read throughout the text and shows how these characters entrust their life and fate to their newly found religion. Overall, Beowulf should be considered not as a pagan text but rather a Christian one because Christian values compose the backbone of the prose. Beowulf is essentially an insight into the history of a people who have come to comfortably adapt to new ideas and beliefs through changing times.

Christianity and Paganism in Beowulf. (2016, Jul 31). Retrieved from https://studymoose.com/christianity-and-paganism-in-beowulf-essay 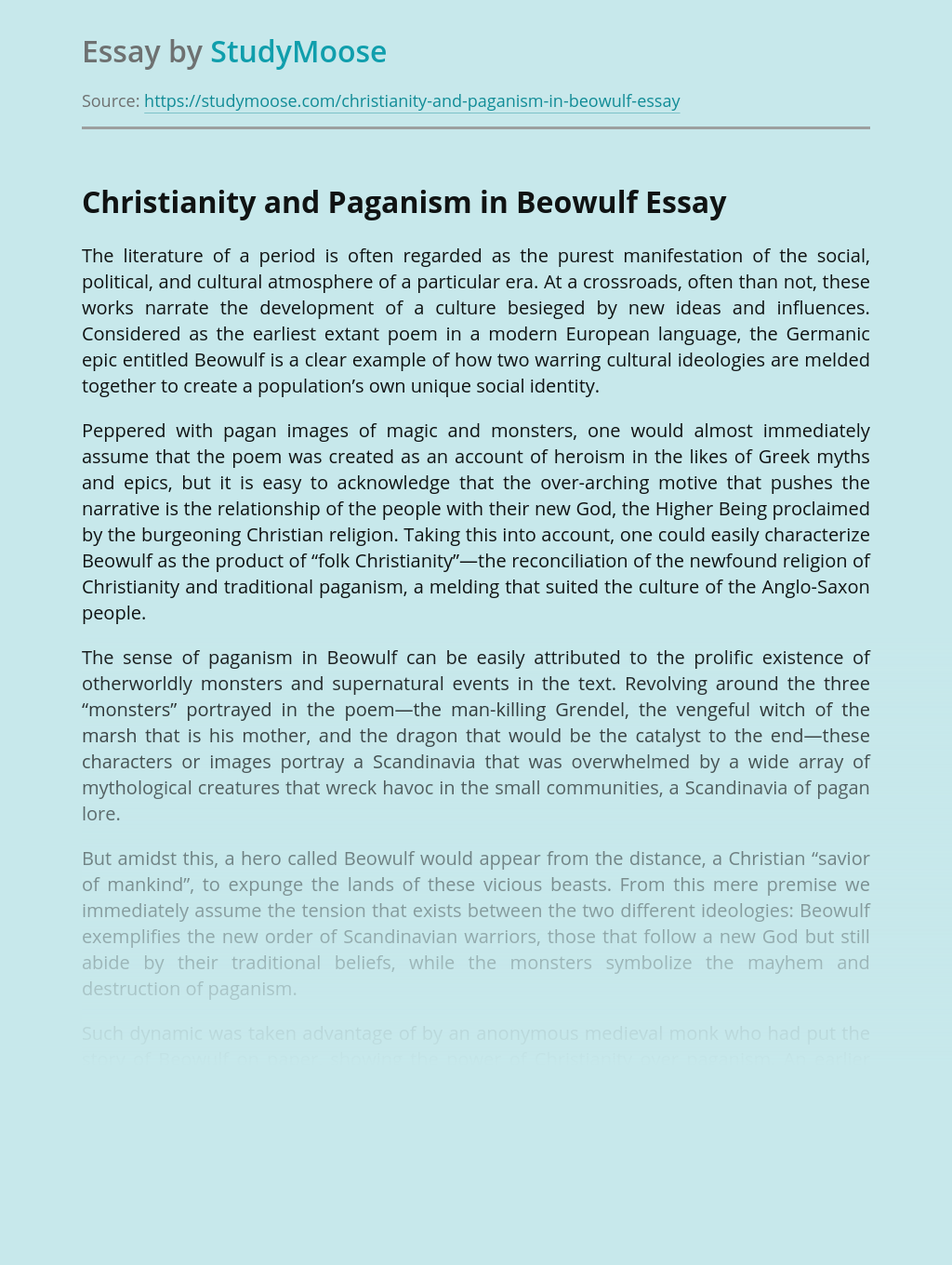 A Critical Response to Beowulf After reading the story Beowulf as translated by Burton Raffel, I saw two aspects of this story written in the Anglo-Saxon period. When reading the story you notice that there are multiple aspects of paganism and of Christianity included in the story. Many scholars have debated whether of not a...

The role of religion in Beowulf

The epic poems Beowulf was first written in a pagan Saxon society, before Christianity was introduced. However, the poem was once again rewritten around the 18th centuries by a Christian poet. There is evidence of this throughout Beowulf as the author is in conflict when it comes to mix his Christian belief with the pagan...

Get Essay
“The Lamb” By William Blake

A reading of William Blake’s “The Lamb” brings forth a really spiritual and obvi-ously pastoral message in a traditional (for the age) Christian style. Blake effectively uses a number of methods of consistency and economy which stated and amplify the sense of spirituality and innocence. His use of repetition, metaphor, and succinct mild impressions offer...

Concepts of Good and Evil presented in Beowulf

A text is essentially a product of its context, as its prevailing values are inherently derived by the author from society. However, the emergence of post-modern theories allows for audience interpretation, thus it must be recognised that meaning in texts can be shaped and reshaped. Significantly, this may occur as connections between texts are explored....

The Rime of the Ancient Mariner

How far is Hamlet dominated by a Christian worldview?

England during the 17th century was a Christian society and country. All Children would most certainly have been baptised shortly after birth and once at a suitable age capable of understanding religion would be taught the essentials of Christian faith. Attendance at church was compulsory; failure to do so without a good medical reason or...

To begin with, in Beowulf the reader is given a vision of a barbarian society at its finest. Courage, prowess in war, loyalty and generosity are the qualities most forcefully portrayed. It is a society of chiefs and kings, a society of a clan spirit, in which the source of the lord’s power lies in...