The Chinese exclusion act was a movement that prohibited Chinese immigration; people used it as a discrimination against Chinese people. In one year Chinese immigration dropped from 40,000 to 23. This shows how people where violent and discriminant to Chinese fellows. In 1879 an anti-Chinese play was created by Henry Grimm; the point of the document was the problem of Chinese people taking over American jobs, this was written in San Francisco, CA. In 1879 there was an anti-Chinese sentiment, the railroad was completed, and a high number act of violence against the Chinese.

Don't use plagiarized sources. Get your custom essay on
“ Chinese Exclusion Act ”
Get custom paper
NEW! smart matching with writer

The document targets the government figures and the America public. This document has a bias towards an argument against Chinese and the document was produced at a time when there was an economic downturn, the document convinced Americans that the Chinese were taking their jobs. Grimm has an anti-Chinese point of view that affects the meaning of the document. This document provides evidence reasoning why many American workers had anti-Chinese sentiment.

For example, “china men plenty work, plenty money’’ this is one of the reasons why Chinese were treated badly. In this titled “the Chinese must go” claims that Chinese people are taking over American jobs, the white man has no work, no money and it is all blamed on the Chinese. While Henry Grimm insists that the Chinese are the reason for job loss in America, evidence in the document contradicts by stating that Chinese have no work and no money, this is demonstrated “ white man catchee plenty of money” in the play.

In the document “Political cartoon”, It is about the protection of Asians and how America should be equal to all men; it points out that America is supposed be equal to all men, the Irish and the German are just like any other Chinese in America, they are all immigrants, it should be fair. This document created in 1871 it correlates to the time when there was a lot of violence towards Chinese people and when 18 Chinese were killed. This document was created for the people as an advertisement for anti-Chinese violence and it has the irony of Irish and German immigrants showing violence to Chinese immigrants.

The document was produced at this time because it was a time when the Chinese where treated bad, and it helps because it achieved some peace towards the Chinese. At some point it might of lowered the Chinese death rate. This picture was created by Thomas Nast, and his perspective was to protect Chinese immigrants from violence of evil people. This relates to the Chinese exclusion act by showing violence. This portrait is important because it demonstrates the good examples and it offers protection to the Chinese.

This contradicts the exclusion act because it shows Irish and Germans being cruel to a Chinese man because they are immigrants too. This is ironic because they were once going thru the same troubles to be in America. Also “Columbia” is supposed to agree with her U. S. laws but disputes the laws in every way. According to Thomas Nast in his cartoon points out how the Chinese immigrants where brutally treated by, also, former immigrants. Although there is much evidence to show that U. S. laws exclude Chinese people, an analysis of the document contradicts that not all American great names and great people support with this act. This is demonstrated by showing Ms. Columbia protecting poor Chinese immigrant and stating that “America means fair play for all men” In the “Autobiography of a Chinese immigrant” written in 1903 by Lee Chew, dialogues about his point of view on why they were treated gravely; and his reasons were because of their virtues, and how they were better than any other Irish, German, or Italian.

He states that Chinese were hated because they were envious of them. This manuscript was intended for American people to show the truth. It achieved to reveal the truth and explain the purpose of all the chaos. The author has a great point of view that reveals true facts; it makes me realize how cruel the people where at that time. The document tell the viewers how other immigrants where highly bitter by the fact that Chinese immigrant workers where better than them.

This is important because it shapes how people where people where at those times; not liking a race just because they are better workers than them. This contradicts the act, from true facts of the document: “labor was never cheap”, this means that scarce work was never the problem but the actual immigrant people that were not as great workers. According to Chew’s journal titled “the biography of a chinaman” exposes the truth by showing facts on how Chinese people were mistreated, giving us reasons on why it all happened.

Although there is much evidence that Chinese man were treated disrespectful, an analysis of the document reveals the true reasons why Chinese where treated in such a way. Jealousy was the whole problem. The Chinese exclusion act was an unfair law that affected several Chinese, their only purpose was to work and have a better life. Some of the documents were weak, they didn’t support much evidence. On the other hand some articles were good, for example the “autobiography of a Chinese immigrant”, this supported with much evidence to let the reader know what exactly was going on with true facts. 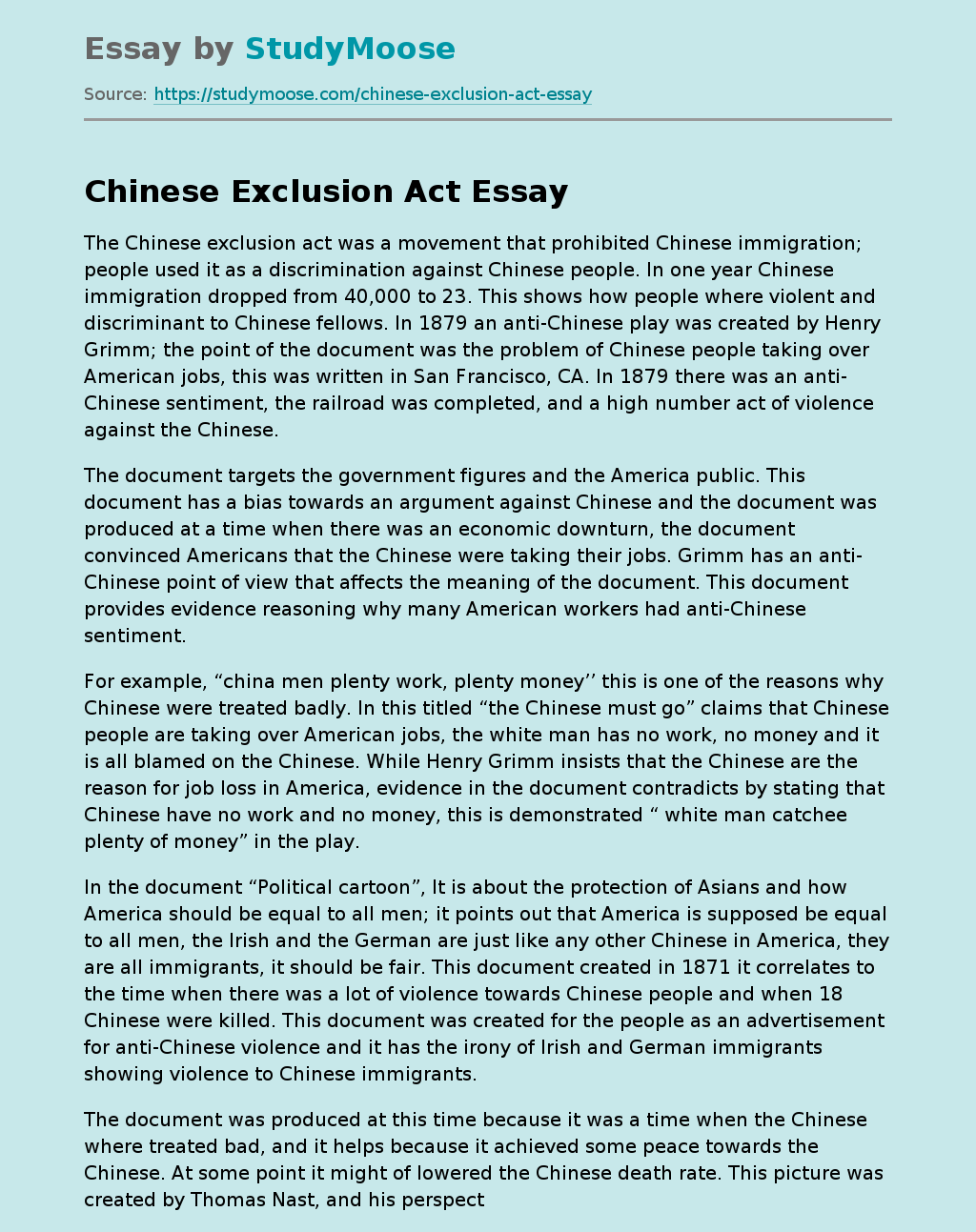