Children Behavior Worse Than 10 Years Ago

Children Behavior Worse Than 10 Years Ago
It is evident that child behavior today is worse than ten years ago. There is a tendency for children today to be more aggressive than ever before. The media is extensive with reports of children doing drugs and exhibiting violent behavior. Girls are indulging in premarital and/or unprotected sex at an early age (The consequence has been increased rate in illegal abortions-some of which have resulted in deaths). At such an early age as 15 girls are sexually active.

Don't use plagiarized sources. Get your custom essay on
“ Children Behavior Worse Than 10 Years Ago ”
Get custom paper
NEW! smart matching with writer

In essence children are less disciplined today than they were ten years ago. There are number of reasons for the decline in children’s discipline, but one of them stands out, and it might even be at the heart of all the others: laxity on the part of parents. Parental laxity has swung open the floodgates harmful factors which have in effect compromised children’s sense of morality and discipline.

By reneging on their responsibilities, parents have denigrated the significance of the family as the source of primary socialization (Schultz, 2012).

Sociologists profess that behavior is learnt through a process known as socialization (Schultz, 2012). Primary socialization, as differentiated from secondary socialization, occurs during the formative years of a child (Schultz, 2012). It takes place through the child observing and learning from those around him. Through this process a child is taught the type of behavior which elicits approval or disapproval from the people around them, usually the immediate family members (Schultz, 2012). It is therefore important that at an early age a child observes and learns the right things, preferably from their family members (Richardson, n.

d). Unfortunately, parents have not been there to accomplish this process (Schultz, 2012).

More over, the institution of the family in the US has been under siege (Schultz, 2012). Children are being brought up in broken families; or they are forced to go through the agonies of living apart from either of their parents (Schultz, 2012). In sum, parents have not been there to give their children the attention and guidance they need. Parents have not prepared their children on how to deal with the manner in which society today has been questioning authority. True, at the heart of this is a clarion call for “personal independence” which has become rampant in the public domain (Children, n.d). And yes, as experts assert, these behaviors are, in part, a “reflection of our own changing view of authority and authority figures” (Children, n.d.). Indeed, the manner in which people have questioned the motives of the lawyers, bankers, politicians has been so unprecedented when compared to the way parents did ten or so years ago (Children, n.d). The Generation Y needs to be taught on how to be “Generation Why?” without being disrespectful (Children, n.d).

The schools, on which parents have entrusted the responsibility of nurturing their children, have done nothing but to sharpen the children’s intellectual acumen (Schultz, 2012). The schools have not been very good at shaping the children’s moral character. The teachers assume that children are taught such things as table manners, good neighborhood at their respective homes (Schultz, 2012). Indeed, children’s bad behavior has made teaching such an arduous job (Schultz, 2012). Most teachers agree that “the number of problem children has increased in recent decades, and the problems are showing up in increasingly younger children, making teaching a tougher job” (Schultz, 2012). The children are not learning well; they are inappropriate language and are not following direction (Schultz, 2012). Instead of schools nurturing the behaviors of children they have been telling parents to “talk to [their] child[ren] every day … Encourage [their] child[ren] to tell [them] if they have had any issues with other children” (Schultz, 2012). Even as the parents have taken a backseat in matters concerning the upbringing of their children, the media has rushed in to fill this vacuum. Today, most young people have, as their role models, movie superstars, rappers, divas and many other media personalities (The Australian Psychology Society, n.d.). Children adore this people, and would do or say just anything as these people do (The Australian Psychology Society, n.d).

Indeed, some children do develop an appetite for viewing violent material (The Australian Psychological Society, n.d; Center on Media and Child Health, 2005; Richardson, n.d).Movie creators have argued, and rightly so, that their work is to tell things as they are: to reflect reality. It is not their work to inspire young people, or create work pieces that are less harmful to them. However, the general cause of this problem is parental laxity. Thus, there is a need for parents to recoup their lost glory as the keepers of discipline and children’s mentors. The parents’ roles of disciplining and mentoring children can, and should, never be delegated to any other person. Indeed, recent attempts by parents to delegate these obligations to schools have been nothing but disastrous. As a result children today are worse than they were ten years ago.

By reneging on their responsibilities parents have exposed their children to a number of whimsical factors, some of which have been explicitly risky. Parental negligence has, first and foremost, had a lasting the effect on the institution of the family as the source of primary socialization. For long, immediate members of the family have been instrumental in the socialization process of a child as he or she grows up. This, unfortunately, is no longer the case as this role has been given to the schools, and where the schools have not been effective, the media has filled the vacuum. Most children today seek inspiration not from their parents but such media personalities as popular athletes, pop idols such as rappers, politicians and divas. Unfortunately, most media personalities are not very keen on being role models for children but on make a living.

The schools on the other end have not done better. While most parents entrust their children’s upbringing on the schools, the schools have tended to throw the burden back to the parents. The schools have insisted that their overarching objective is not to mold children’s character but to help them attain high test scores and get good grades. Finally, there have been no efforts by the parents, or even the society, to remind the children that, as much as it is adorable to attain some personal independence, this is not possible without the involvement of their parents and the society at large.

Center on Media and Child Health. (2005). The Effects of Electronic Media on Children Ages Zero to Six: A History of Research. Retrieved from http://www.kff.org/entmedia/upload/the-effects-of-electronic-media-on-childre

Children Behavior Worse Than 10 Years Ago. (2016, Apr 16). Retrieved from https://studymoose.com/children-behavior-worse-than-10-years-ago-essay 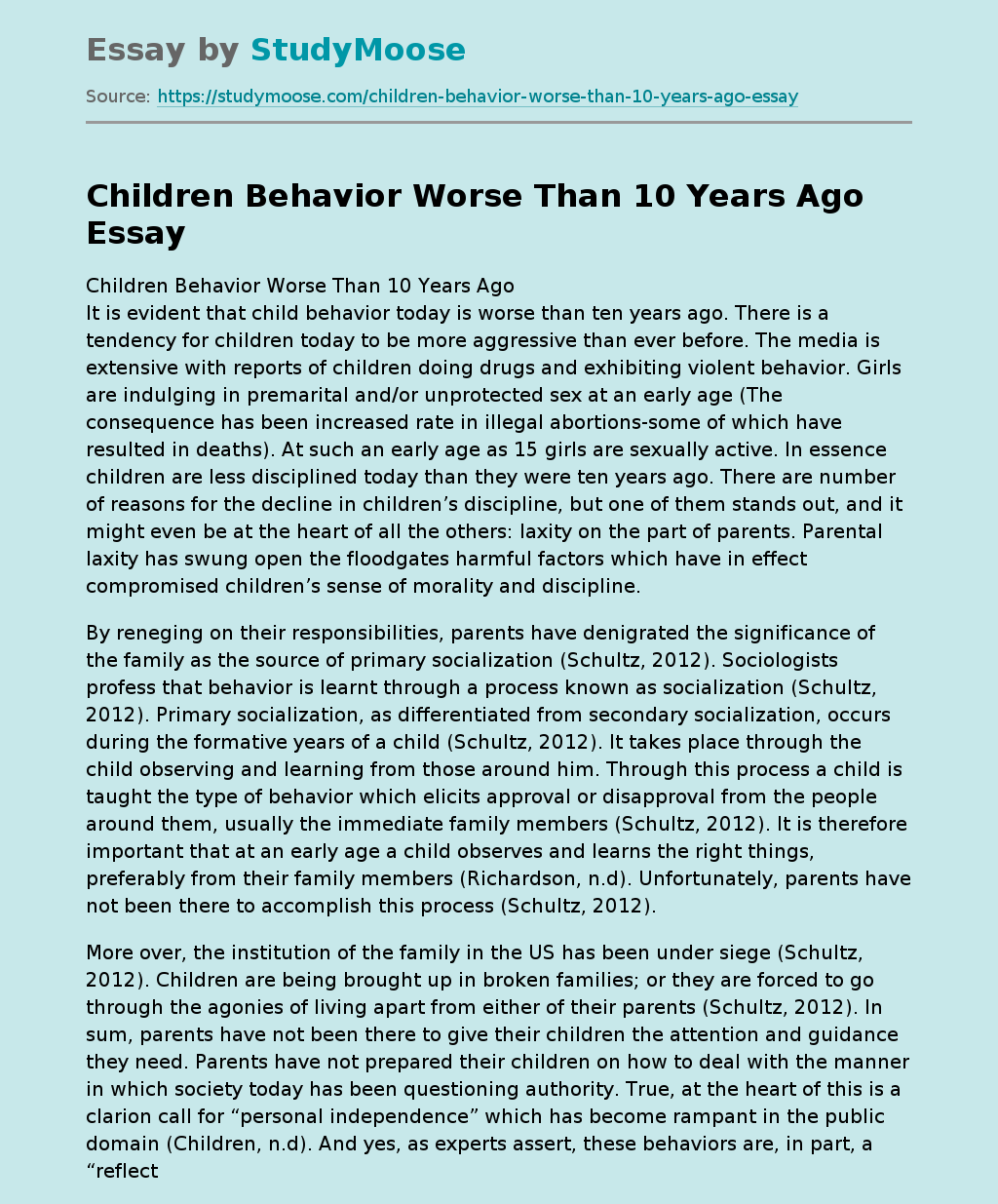