Freud in the late 19th century acknowledged the phenomenon referred to now as childhood amnesia (CA), where adults are unable to remember events from their early childhood- even though young children have incredible learning capacities. The cause of CA is uncertain; psychologists either point to the child’s neurological make up or the development of their language to try and attempt to explain CA. Therefore, studying CA is important to understand some of the developmental processes children go through.

Firstly, the process of children learning language is the biggest developmental change that is evident in humans, and this usually overlaps with when children begin to remember events (Nelson & Fivush, 2004).

Don't use plagiarized sources. Get your custom essay on
“ Childhood Amnesia (CA) ”
Get custom paper
NEW! smart matching with writer

This suggests that the acquisition of language allows for the rehearsal of experiences, and thus better long-term memory storage. As infants begin to use language, parents engage in conversations with them about past and future events. Adults provide the structure and most of the content to these conversations, with the child simply repeating or confirming what they say.

Therefore for the child to coherently recall the event, the adult must help children organise their experiences by providing the foundations (Bloom, 1991).

A study conducted by Simcock and Hayne (2002) supports the language hypothesis. They found that when children recall memories they do not use anything outside their vocabulary from the time of encoding that memory, even though they had a broader vocabulary at the time of the test.

Therefore, their inability to put pre-verbal experiences into verbal form keeps them from the child’s autobiographical memory and thus producing CA.

Furthermore, language is crucial for the development of autobiographical memory in children, and thus the deprivation of communicating about the past produces flaws in their early memories. Weigle and Bauer (2000) supported this when they found that deaf adults, who were not brought up with sign language, had roughly the same age for their earliest memories as hearing adults but deaf adults had significantly less early memories. Therefore, this suggests that lack of language prevents rehearsal, which supports the idea that speaking about the past is fundamental for the formation of autobiographical memories and thus the language hypothesis of CA.

However, the effect language has on CA may be affected by culture. In a study, White American adults recalled more memories before the age of 5 than Chinese adults did. Furthermore, on average, the White American adults’ earliest memories were 6 months earlier than those of Chinese adults (Wang, 2006). Therefore this suggests that the individualism of western cultures encourages more attention to be given to individual experiences and as a result they have more and earlier autobiographical memories, and thus less CA due to the encouraged rehearsal of past events.

In comparison, CA may also have a biological explanation. The hippocampus plays a significant role in regards to long term memory. The hippocampus is not fully developed until the child is 3 or 4 years old and so children before this age are not neurologically mature enough to create stable and persistent autobiographical memories (Josselyn & Frankland, 2012). Existing memories are destroyed by the postnatal production of new neurons. Only at later developmental stages where the neurogenesis rate declines, does the ability to form long lasting memories come about.
The biological approach is supported by research conducted on animals. For example, Rudy and Morledge (1994) found that young rats demonstrated much faster forgetting than older rats. In the immediate retention test, 18 to 32-day old rats displayed similar freezing levels, however 18-day old rats froze far less than older rats on the 24-hr retention test which implies that rapid forgetting occurred. CA takes place because the 18-day-old rats have not fully developed neurologically yet to form long-term representations of the scenarios. Thus, CA is a universal phenomenon that occurs across species. Therefore, CA cannot be fully using human concepts and as a result the biological explanation of CA is strengthened.

However, if the cause of CA is the postnatal development of brain structures that are required to form stable, long-term memories, a two-year-old-child should not remember anything from the first year of their life. But, Howe and Courage (1993) found that two years olds can recall events from a year before accurately. What’s more, Perris, Myers & Clifton (1990) found that when children were placed in a dark room, those who had been in the dark room 1 to 2 years beforehand displayed less distress than those who had not. It also looks as if they had replicated the endeavours they had performed in the same situation 1 to 2 years earlier. Therefore, children who have not fully developed neurologically are still able to produce and recall autobiographical memories and thus, due to conflicting research, the biological explanation is flawed.

To conclude, the underlying cause of CA remains uncertain. Not one of the explanations for CA is more convincing than the other. First of all, evidence to the contrary suggests that children can actually remember events from their past before they are fully neurologically developed. Furthermore, the explanation based on language acquisition fails to take into account that animals have the ability to form episodic memories. If the development of language is necessary to create recallable memories, then the ability to form memories should not be present in animals at all. In addition, both explanations are quite limited in their view of CA, and its cause. Before conclusions can be drawn about the cause of CA, developments in the research of CA are essential. CA cannot be fully explained by only examining biological or developmental aspects; other factors that influence the minds of humans are repression, culture, ethnicity, and emotion- these factors must be considered. What’s more, more scientifically sound methods of studying CA are required to form a more objective explanation, such as using fMRI machines. Therefore, both theories are important to some degree, nevertheless improvements in the methods of the research and a more tolerant approach will be necessary to fully understand CA. Thus, the cause of CA remains unclear. 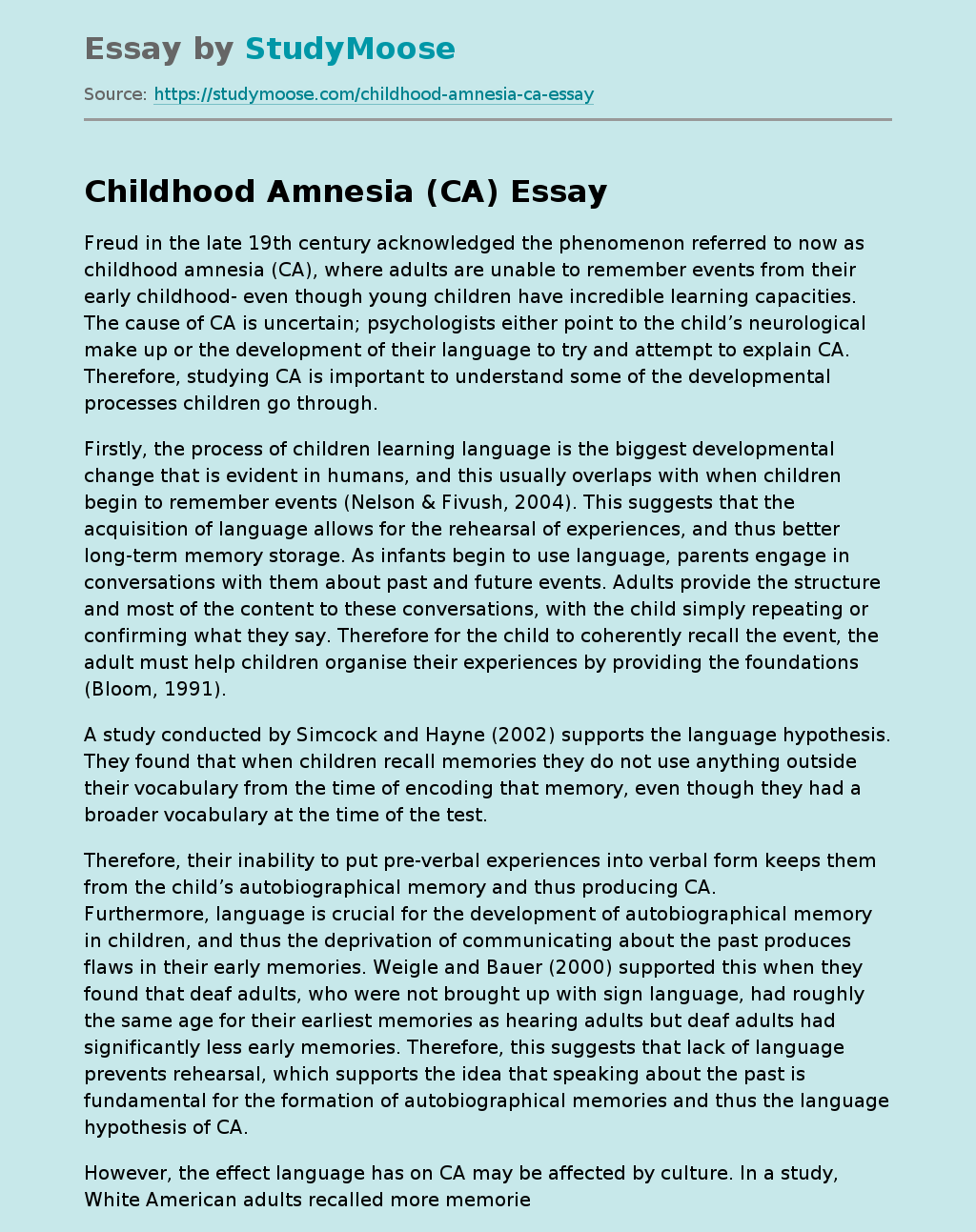