Which is more powerful, the human mind or body? And, how can a mental illness like dissociative identity disorder effect the way we connect our mind and physical body? Malcolm Rivers, a convicted murderer in the movie Identity, is on death row, awaiting his execution for several brutal murders he had orchestrated. Due to that fact that Rivers had been diagnosed with a mental illness, D. I. D, he has no control and did not receive any medical/psychological help, he cannot be held accountable for his actions.

Don't use plagiarized sources. Get your custom essay on
“ Characteristics of Malcolm Rivers ”
Get custom paper
NEW! smart matching with writer

In the movie, Malcolm has blackouts which sometimes last for days at a time. These blackouts cause him to have no control over his mind or body. He believes that he is one of the characters that have been created in his head. An example of this would be when Dr. Mallick hands him the mirror to see his reflection, Rivers does not expect to see what he saw, he was expecting to see who he thought he was at the time (the cop).

This shows that he has no control over who he thought he was.

This also relates to control over his actions, if in his mind he was not who he believed to be, then he cannot be responsible for the actions portrayed by a fake internal personality. A second example which shows that he has no control, is when he fades in and out of character at random times. During the same mirror scene, Malcolm bizarrely fades back into the internal personality of the cop.

There is no mental or physical control over these fade backs, leaving Mr. Rivers helpless in the situation.

Mr. Rivers was not offered any medical treatments or help, meaning, Malcolm was helpless; he was definitely suffering mentally caused by many traumatic incidents he was put through as a child. In the beginning of the movie, for example, we hear (from the tape recorder) Dr. Mallick asking Malcolm about his childhood. The things that had been said about his mother being a prostitute and stories about his childhood where he was left at a motel, are sure to cause any child psychological trauma, and with no one to confide in or to speak to about his problems, he was bound to get D. I. D; this mental disorder proves that he cannot be responsible for the murders.

Dr. Mallick only helped to prove that it was the ten personalities controlling Malcolm’s actions, and not Malcolm himself, but he failed to help him seek treatment or psychological help before any of this happened. If only Malcolm had been given the attention he needed, he would not have built up all this repression. Furthermore, the last personality, timmy, who is like a reflection of his brutal upbringings as a child, turns out to be the real murderer.

Malcolm Rivers is not responsible for the murders and should not be held accountable for any negative actions done while his state of mind is in that of one of the internal personalities. Mr. Rivers is unable to control his mind and body; shown when he has uncontrollable black outs and fade backs into one of the made up personalities. Malcolm is not mentally stable and probably has post traumatic stress syndrome; He has not received any real form of psychological help, which is another reason as to why he is so helpless, and therefore not responsible 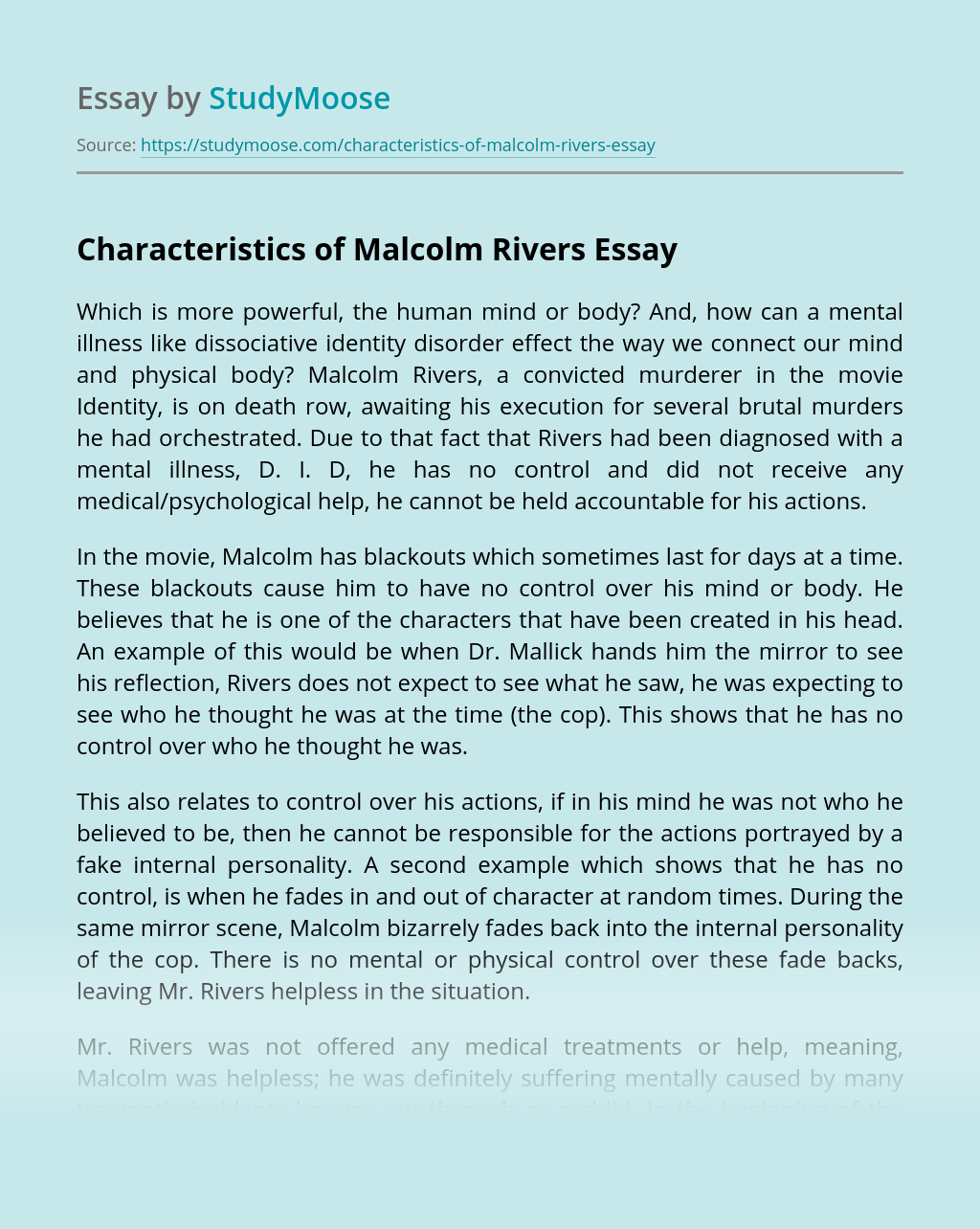