Cell phones have been around for centuries. On April 3, 1973 the first portable phone was introduced. Many Americans and people around the world use cell phones almost everyday. Cell phones do have pros, but they do have their cons too.

Five pros on the cell phone are that they believe that cell phone use is not associated with the risk of developing a brain tumor. The second pro is that in 2000 the FDA and the International Association for the Wireless Telecommunications (CTIA) signed a research agreement for further investigation on the health effects of cell phones.

Don't use plagiarized sources. Get your custom essay on
“ Cell Phones Essay ”
Get custom paper
NEW! smart matching with writer

After the investigation, they discovered that “no association was found between exposure to radiofrequency (RF) radiation from cell phones and adverse health effects.

The third pro is that in May 2001 the GAO reports “Research and Regulatory Efforts on Mobile Phone Health Issues,” they did conclude that there had been no scientific evidence that can prove that cell phone radiation had any health effects, but that more research on the topic was indeed needed.

The fourth pro is that Cell phones may be the world’s best invention to this day; “In 2008 the $148.1 billion wireless industry had over 270 million subscribers in the US (87% of the population) who used over 2.2 trillion minutes of call time.” The fifth pro is in December of 2012 the $185 billion wireless industry had gained 326,475,248 wireless subscriber connections in the US and 301,779 cell phone tower sites across the country.

Five cons on the cell phones are that they say the accurate amount of time for cancer to develop is 20-30 years and cell phone studies have monitored periods of 10 years or less.

The second con is that on February 26, 1985 the first official safety guidelines for radio frequency (RF) radiation was enacted by the US Federal Communications Commission (FCC) to protect the people from being exposed to any dangerous “thermal effects” – levels of RF that could possibly heat human flesh to harmful temperatures. A third con is that in 1993 there was a major concern that there could be a possible link with the brain and cell phone use. A husband sued a cell phone manufacturer in Florida’s US Distract Court for the cause of his wife’s brain tumor.

The fourth con is that there is proof that exposure to high end (ionizing) radiation of ultra-violet lights, X-rays, and Gamma rays are known to cause cancer. The last con for the cell phone is “The INTERPHONE study, a 13 country, 10 year, $25 million endeavor, found that there was no overall increase in the risk of the brain tumors glioma or meningioma among cell phone users, but also found “suggestions of an increased risk of glioma, and much less so meningioma, at the highest exposer levels.” The study concluded that the evidence was not strong enough to prove a casual link between cell phone use and the development of brain tumors.”

Cell phones are used for many things nowadays. Teens are constantly on there phones talking, texting, playing games, watching videos, etc. Although many people seem to love this device, it does have its faults in the process of using it. 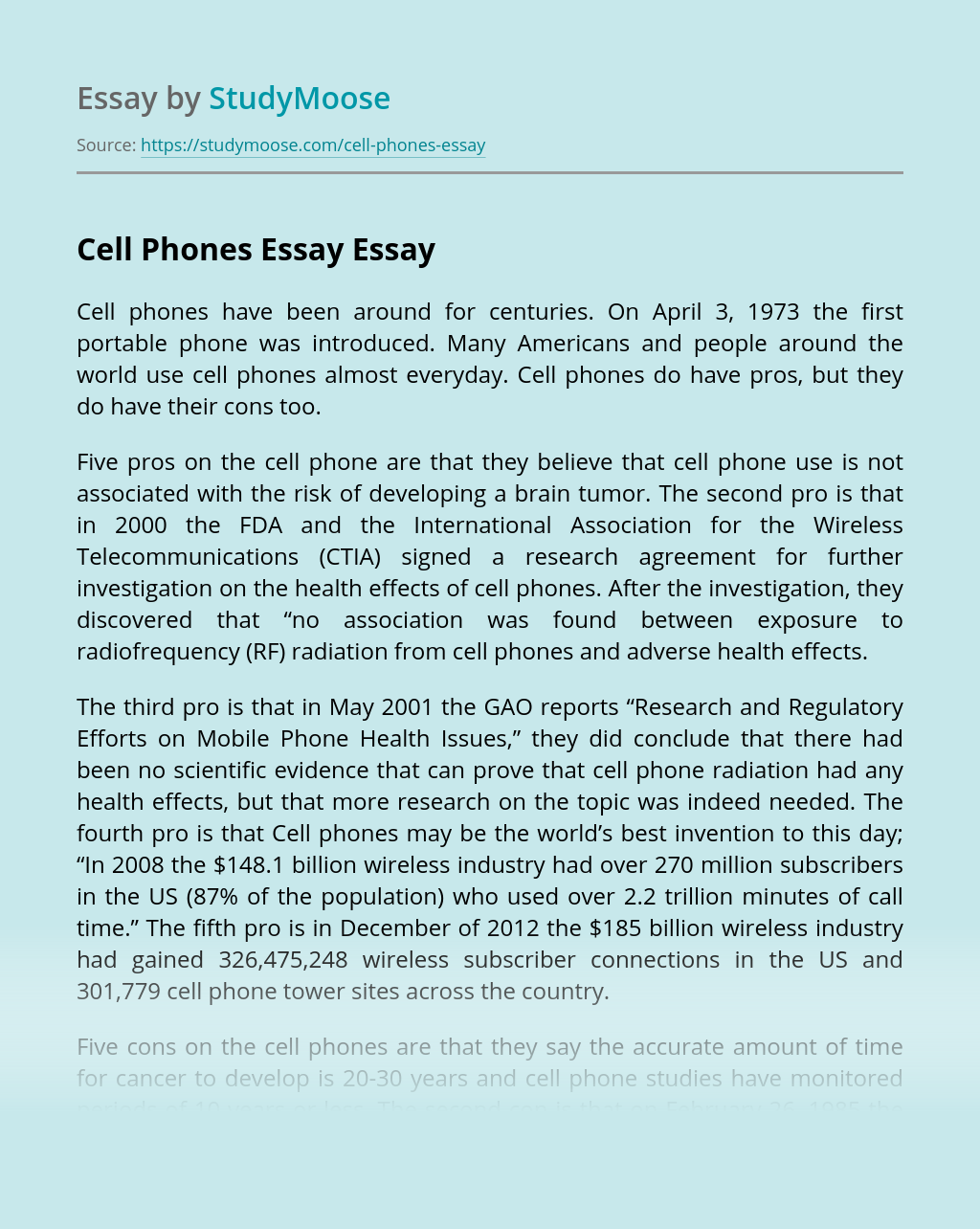