Causes of the Dust Bowl

One of the most devastating environmental crises that occurred in the United States was the Dust Bowl. The Dust Bowl began shortly after the Great Depression began in 1929 and lasted throughout the 1930’s. It affected everyone, farmers and consumers alike, in its path negatively. The Dust Bowl of the 1930’s was caused by four major factors: drought, climate misconception, poor land management, and most importantly, wind erosion.

The first of the four major factors is drought. During the Dust Bowl and the 1930’s there were four major periods of drought.

Don't use plagiarized sources. Get your custom essay on
“ Causes of the Dust Bowl ”
Get custom paper
NEW! smart matching with writer

The first lasted from 1930 to 1931, the second occurred in 1934, the third in 1936, and the last period of drought lasted from 1939 to 1940. The Great Plains had experienced periods of drought before and no major problems had occurred, so the main problem was that the farmers did not have enough time in between the periods of drought to recover because they were so close together. Another issue was that the droughts occurred at the same time as the economic downfall known as the Great Depression.

This meant the farmers did not have the money to spend to help their crops. Also, many farmers simply believed that the droughts would end and that the rains would come soon as they had many other times in the 1900’s (Drought).

Climate misconception played a large role in the creation of the Dust Bowl as well. The misconceptions about the climate and the annual rainfall in the Great Plains first began in the nineteenth century when people first began to settle in the area.

Many of these settlers believed that they would always get enough rain to grow healthy crops because they settled on the land during years with abnormally high amounts of rain. Another reason people believed that the land would always be good to farm is because they were fed propaganda by railroad companies and land boosters. Even though there were several periods of drought that occurred before the 1930’s and the Dust Bowl, people were encouraged by the rains that always came soon after. The farmers’ misconceptions of the climate and annual rainfall also affected the way they farmed the land (Causes).

Poor land management is one of the two most important causes of the Dust Bowl. The farmers were not able to manage their land well because they were not aware of the different techniques they should have used on their farms in the Plains. One of the techniques that the farmers should have used was crop rotation. Crop rotation would have been a great help in keeping their soil in larger clumps, whereas when the farmers repeatedly planted wheat in the soil, the nutrients were used up and were not replenished. This caused the soil to break up into a dust-like consistency that made the soil easier to be swept away by the winds. Farmers also should have had a year round ground cover on the soil to prevent the wind from sweeping it away, but the farmers were not aware of the heightened risk of wind erosion because they had not had to deal with it in the past.

The last technique that the farmers should have used to help manage their land is known as shelter belting. Shelter belting is the process of planting trees and bushes in order to slow and block the winds that blew across the otherwise flat ground of the Great Plains. Another issue with the way the farmers managed their land was that they switched from the lister (a type of plow commonly used by farmers in the 1900’s) to the one way disk plow. The one way disk plow was favored by the farmers because it made plowing the field easier and much faster, but the downside to the new invention was that it left the soil even more susceptible to wind erosion (The Dust Bowl).

The last factor that contributed to the Dust Bowl is wind erosion. Wind erosion is considered to be the most important and the most preventable cause of the environmental crises. It has since been proven that the size of the farm is directly related to the amount of wind erosion that will occur on the land. Experts say that the smaller the farm is the more wind erosion there will be on the land because larger farms are necessary to finance and benefit from erosion control. Small farmers on the other hand need to cultivate more of their land more intensely and they usually do not earn enough money to be able to spend anything on soil conservation.

Many historians and researchers blame the overabundance of small farmers who did not participate in erosion control for the extent of the wind erosion during the 1930’s and they blame the Homestead Act of 1862 for bringing these farmers to the Plains. The Homestead Act gave away hundreds of thousands of land plots that ranged from about 160 acres to about 320 acres even though agricultural experts recommended that the farms should be about 700 acres to 1200 acres to minimize wind erosion. The farmers that moved onto the land that was given away were the kind of farmers that did not implement the soil conservation tactics that were necessary to prevent the Dust Bowl in the Great Plains (Wind Erosion).

In conclusion, drought, climate misconceptions, poor land management, and wind erosion were the four main causes of the agricultural tragedy of the 1930’s. These four factors came together at the beginning of the 1930’s to create what is now known as the Dust Bowl which lasted until the end of the decade. Thankfully, an environmental crisis like this has never taken place again in the United States and thanks to the organizations founded after the Dust Bowl, such as the Soil Conservation Service, our generation and the generations that follow will not have to live through the hardships that another Dust Bowl would cause.

Causes of the Dust Bowl. (2016, Jul 01). Retrieved from https://studymoose.com/causes-of-the-dust-bowl-essay 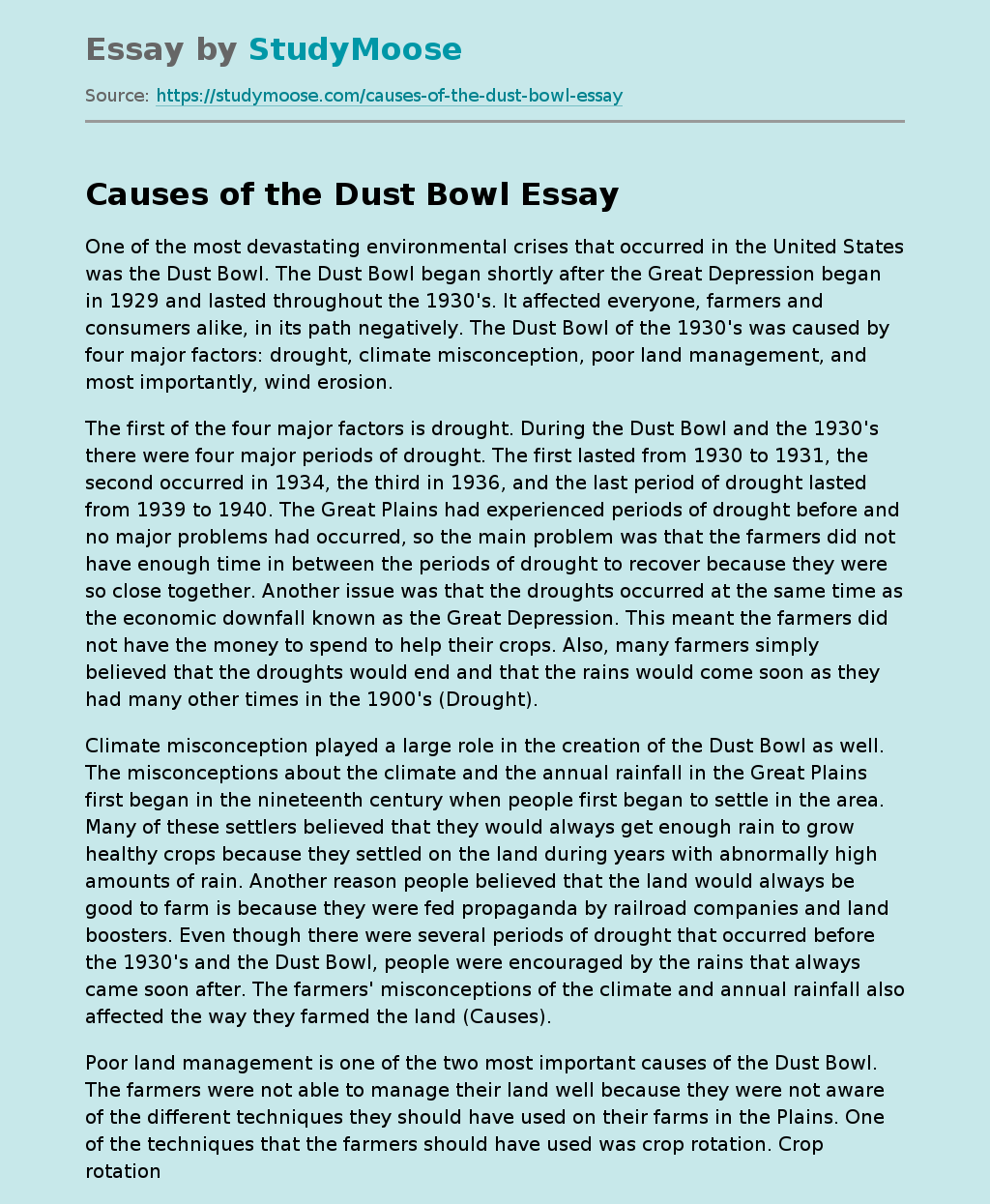