Philippines’ economic status nowadays depends mainly on the production of crops. As we all know, our country has also the advantage when it comes to technology and especially in businesses. Likely in producing products that’s essential to us Filipinos. From this statement, we could conclude the production of materials by factories. Chemicals and other harmful and toxic liquids being used by these factories would greatly affect the soil. Vehicles and other chemical-producing machines penetrate into the soil and also make the soil acidic.

Turn in your highest-quality paper
Get a qualified writer to help you with
“ Chalk Dust as Soil Neutralizer in Agriculture ”
Get high-quality paper
NEW! AI matching with writer

One of the reasons of low crop production by farmers is because of high acidity of soil. According to Philippine Agriculture, the crop production decreases by 3.13% in year 2013 to 1.53% in January to March of 2014 chart. To meet the needs of farmers also to some gardeners not just in our nation, but also worldwide, used chalk are utilized as soil neutralizer.

Chalk as soil neutralizer is then initiated by the researchers. Chalk contains different minerals such as calcium carbonate, phosphorus and sulfur which are essential in the growth of healthy crops.

Also one of the causes of soil acidity is due to soil degradation or erosion and soil acidification. Soil erosion removes the usually fertile topsoil resulting in the reduction of the productive capacity of the soil. In many upland areas throughout the country, the reddish appearance of the soil is due to the exposure of humus-poor but iron oxide-rich subsoils after the dark and humus-rich topsoils have been removed by erosion (Asio, 1997).

David (1988) noted that one third of the total land area of the Philippines has been excessively eroded.

In terms of erosion rates estimates vary considerably with land use systems and across different areas in the country. About 70 percent of soils of the Philippines belong to Ultisols (Evangelista, 1993) and unclassified mountain soils which have generally low contents of essential plant nutrients and soil organic matter hasten the degradation of these inherently less fertile soils. The natural factors affecting soil erosion by water include rainfall, vegetative cover, the slope of the land, and soil erodibility (Lal, 1984; Presbitero 2003).

No: There is no significant difference between the chalk and lime in neutralizing the soil.

This study will be a great help to the treatment of soil acidity not only to Zamboanga City but to all farmers worldwide. The outcome of this study will be utilized to improve the production of crops to feed millions of people and to encourage household members to plant crops easily especially vegetables on pots and even to their surroundings. They could also use this for their family consumption. This study also helps in recycling used chalks in all public schools that could just be seen everywhere in school corners and corridors. It is undertaken in use for finding means to produce costless soil neutralizer in an easier way. This product will generate implications and findings that are beneficial also for our household members who are engaged by this kind of activity. Through the help of this product, they can earn money by selling crops like fruits and vegetables due to its ability of neutralizing the soil.

This study is limited to the use of chalks as a material for treating soil acidity. This study was conducted from June 24, 2014 to July 29, 2014. The investigation was done for a month.

Neutralizer-which the researchers use lime as their control variable and chalk as their alternative variable in making soil neutral when acidic, cause to undergo neutralization. Lime-the control variable used in the study; a white substance, calcium oxide obtained from limestone used to neutralize acidic soil. Chalk-the alternative variable used in the study; a soft, white porous sedimentary rock, a form of limestone composed of the mineral calcite (calcium carbonate). pH – a color between red, green and blue that indicates if a chemical or liquid is an acid or a base. By this, the researcher used litmus or pH test paper as for measuring the soil with different treatment’s acidity.

Used chalks from schools are considered waste. It contains different minerals such as calcium carbonate, phosphorus and sulfur which are essential in the growth of healthy plants. The acidity of the soil is mainly due to the hydrogen (H1) ion concentration of the soil when the pH is below 7, if the pH of soil is above 7, the soil contain alkaline calcium carbonate. The acidity of the soil can be neutralized with the use of used chalks. More on this, there are other nutrients found in chalks that can treat acidic soil. Then it will be expected to have a pH of 6 to 7 which is adaptable to garden plants.

This study is to recycle used chalks and use of neutralizing and it is undertaken in order to find means to produce costless neutralizer in an easy way. This study is also very helpful for us today because of the factories that disposed chemicals incorrectly and is contaminated to water and especially also to the soil itself. It could affect the economic status of a city, because farmers could not deal with this kind of problem due to lack of ideas and resources. It would be a great help to farmers including all people in the whole world in growing and taking care of plants, especially above all, to sustain their businesses and their health that the plant itself will not harm the consumer. It could greatly help our Mother Earth in sustaining a better, greener and richer planet.

The used chalks will be pulverized in mortar and pestle and will be measure in different amount (including lime with 75 grams) and will be placed in same amount of soil. There will be differences in the pH level before and after neutralizing it and also to have a costless neutralizer for acidic soils. They can use chalks that are abundant in public schools especially in grade schools.

Prepare 600g of used chalks that contains different mineral such as calcium carbonate, phosphorus, sulfur which are essential in the growth of healthy plants. Mortar and pestle is used to pulverize the chalks. Any empty rectangular container for the pulverize chalks. A 3000 grams weighing scale for weighing the amount of pulverized chalks including the soil. 16 pieces plastic cups for placing the treatments. pH test paper for measuring the ph or the acidity of a solution. A 200g lime; white substance calcium obtained from limestone used to neutralize acidic soil.16 of 150g of soil for every treatment.

Enough soil was gathered from Ayala, Phase 2, Country Homes Plaza. 2400 grams of soil were prepared to be used in the experimentation.

Enough used chalks were gathered from different sections in Ayala National High School. So instead of throwing these chalks, it could be use for neutralizing the soil and the used chalks will be pounded using mortar and pestle to pulverize them.

Enough lime was bought in the town of Zamboanga City. The lime were preserved until the researcher will do the experimentation. 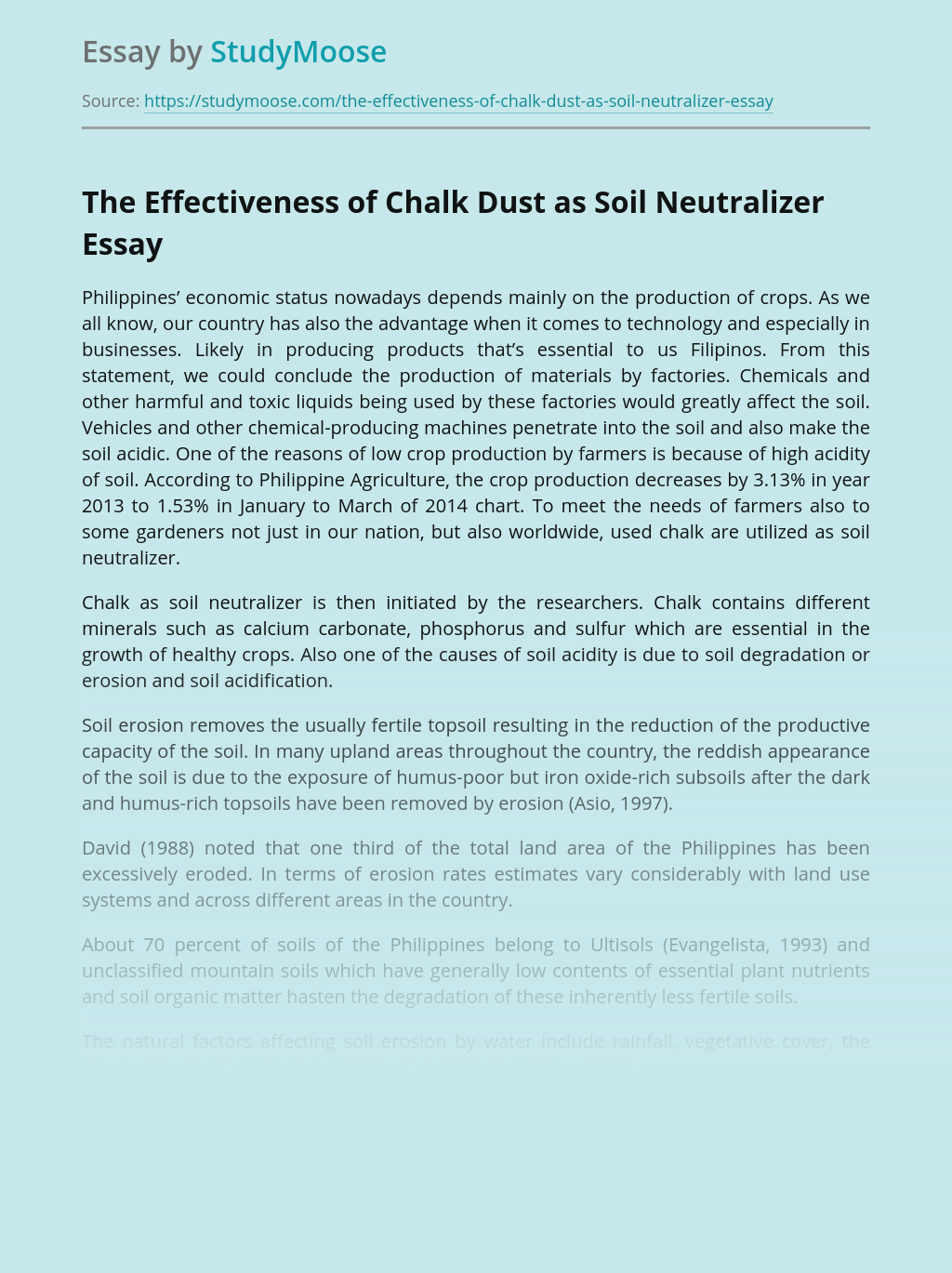 Turn in your highest-quality paper
Get a qualified writer to help you with
“ Chalk Dust as Soil Neutralizer in Agriculture ”
Get high-quality paper
Helping students since 2015
Stay Safe, Stay Original