Causes of Conflict between India and Pakistan

The history of Pakistan as an independent country started in 1947. This event happened when Great Britain’s subcontinent India was divided into two regions, and the partitioned part is known today as the countries of Pakistan and India. The separation is the start of a series of changes due to the formation of the All-India League in 1906 in seeking political rights for Muslims. The main person behind the forcing of the separation was Mohammed Ali Jinnan who served as the leagues’ president.

Turn in your highest-quality paper
Get a qualified writer to help you with
“ Causes of Conflict between India and Pakistan ”
Get high-quality paper
NEW! AI matching with writer

His first movement was in working in “India’s Congress party for a free united India” through doubting respects of Hindus into the rights of Muslims. In 1940, a separate Islamic state was insisted by Jinnah, and when the British departed in 1947, the Pakistan became a  renowned member of the British Commonwealth of Nations(Bajpai 2003).

When the British departed, a lot of Hindus migrated to India likewise a lot of Muslims fled to Pakistan. A fall of economy then followed Pakistan because of shortage of Hindus working for them.

Religious confrontations and communal riots occurred and the worst series of wars is happening among them(Bajpai 2003). The partition brought a bloody affair wherein millions of Hindus and Muslims, including the innocent ones, were killed. Series of accusation increased the tensions. The main reason of the conflict between India and Pakistan is under national interest and being monitored.

The Junaggadh at Gujarat, so far is the first cause of conflict. Pakistan’s Governor General Muhammad Ali Jinnah accession of the area in September 1947 started the misunderstanding.

Despite of his argument that Hindus and Muslim could not live as one nation from his Two Nation Theory he still fell to the scheme of avarice. So, India’s defense Minister Sardel Patel insisted to make the accession void and hold a plebiscite at Junagadah because if it was permitted to go with Pakistan, it could cause a communal unrest across Gujarat.

Knowing that the existing democratic government is the Arzi Hukumat at Junagadah, Patel regulated the annexation of Junagadh’s three principles since it is facing a financial collapse and can’t resist Indian forces. India claims that it was them who first invited to accept their reins. Therefore, to give an answer to where the city will go with, a plebiscite was conducted in December 1947 to which it showed 99% of Junagadh civilians prefer India than Pakistan (Sadiq 2006).

The territorial disputes is the second a highly controversial issue. Kashmir is a Muslim-majority princely state hat is being ruled by a Hindu, Hari Singh that would neither go with India or Pakistan’s ruling. The conflict is initiated when the Pakistan heard rumors that Hari Singh wants to assent Kashmir over India. Eager too take control, the paramilitary forces of Pakistan invaded Kashmir in September 1947. Although Kashmir is well equipped and ready to face the Pakistan, the trouble in weakening the law and the position of order was put into consideration by Hari Singh so he asked for India’s help to deal with the problem.

But Kashmir is not under the jurisdiction of India so through desperation, the Maharaja signed the Instrument of Accession. On October 27, 1947 at the Kashmir’s capital, Srinagar, the Indian troops secured the area and the valley itself. Intense fighting was visible during that time. But, through Indian Prime Minister Nehru, he declared a ceasefire and sought U.N. intervention and promised a plebiscite. Until now, both countries hold a division of the state under the Line of Control (LoC) which distinguishes the ceasefire line that was agreed in 1947. Furthermore, some of the other territorial quarrel includes the clash in Siachin glacier and disagreement on Sir Creek. Also, Pakistan’s Baglihar Dam is a heat of discussion after being built in the Indian managed Kashmir part.

The fourth comes from the Bengal refugee situation. Although there is signed a trade agreement, and commitment to resolving bilateral disputes through peaceful means, hundreds of thousands of Hindus returned to East Pakistan, after a lot refugees flooded into West Bengal and other states from East Pakistan(Sadiq 2006). The crisis is due to communal violence, intimidation and repression from Muslim authorities. Yet, the agreed affairs did not take long, mainly because of the dispute owing to Kashmir.

For the fifth crisis, it was the 1971 War in Pakistan and the Afghanistan involvement. Brought by political problem in Pakistan, Indian intervention (Mukti Bahini of the Indian Military) in favor of the rebelling Bengal helped Eastern Pakistan win its independence creating Bangladesh. This leads to an assault by Western Pakistan to India.

For the Afghanistan issue, Pakistan effectively supported Afghanistan from its twist against Soviet Union policies. Pakistan has been involved in many anti-Soviet activities of Afghanistan too. So, the prime intelligence organization of India entered the anti-Soviet forces at Afghan region in order to dismantle it. Adding more, the Taliban regime at Afghanistan is strongly supported by Pakistan to which it is firmly opposed by India and therefore criticizing Pakistan for its support to the terrorist group.

The continues terrorist attacks, the sixth one, played role in the conflict., After the Sept. 11, 2001 terrorist attacks that happened to United States , there was a worldwide awareness and monitoring  in  terrorist organizations specifically to al-Qaeda in Pakistan because suspected militant activities is present and working in the country . The surveillance was proven true after a High-ranking al-Qaeda members were captured by Pakistani officials and the evidence showed broadcast that they are operating in the country.

Also, conflict with India is another dilemma that Musharraf is encountering. News on terrorist attacks is regularly heard and that this usually occurs in Jammu and Kashmir wherein the claim is due to Islamic extremists that was encouraged by policies of Pakistan.  Citing some examples of the terrorist events are Wandhama massacre in January 1998, assassination of Abdul Ghani Lone in Srinagar, the July 20, 2005 Srinagar bombing and the Budshah Chowk attack on July 29, 2005(Chellaney 2006).This event have lead into an all-out-war with terrorist globally.

The seventh worst reason of the crisis is the human rights violation .Both countries have been accused for human violations and have been always denying. Indian Security Forces was blamed by Pakistan Kasmiri organization for occurrence of human right abuses at the state (Bajpai 2003).  It was absolutely denied by India, claiming that only a few incidents was their fault, and it was emphasized by them that most of the crimes and violence in Kashmiris are  toiled by insurgents. Districts of Baramula and Anantnaq in Kashmir are mostly affected. Frequency of different crimes such as rape and moves on kidnapping is evident. Raiding and rioting from time to time appear and laundering of people’s money almost happen everyday. This intensified type of insurgency appeared during 1980’s.

Finally, the Kargil problem is a situation that needs to be greatly considered. Attempts to restart a dialogue between the two nations are then being put into each mind for a solution to the conflicts. A major boost happened in  February 1999 when a meeting was held by both  Prime Minister at Lahore upon  their signing of an  agreements(Shakil-ur-Rahman 2007). However, the policy was not respected in May 1999 after the intrusion of Pakistani forces into Kargil at Jammu and Kashmir which is an Indian Territory. The “Kargil conflict” resulted into a strong battle among the  forces of both country (Shahin 2004).

It was the Indian army who successful regained Kargil. And for the Pakistan, a military coup effort overturned Nawaz Sharif government of October 1999 and proved a need for a mutual relation. At, 2001, Pakistan’s Pervez Musharraf talks for an agreement with Indian Prime Minister Atal Behari Vaipayee fell through in Agra summit. And, in June 20, 2004, with India’s new administrator, an extension in the ban of nuclear testing was agreed by both countries. Also, both  requested for  hotline set up  between their foreign secretaries so that  misunderstandings which could lead to nuclear war would be avoided (Shahin 2004).So far, these treaty although valued by both countries, is still monitored because chances of conspiracy could still be possible. Right now, awareness at this issue is the spotlight of U.N.

Giving a probable answer for the situation, the best way to end the Kashmir violence is going into negotiations between Pakistan and India with the Kashmiris voice involvement. Yet, here are some specific possible solutions; (1) the status quo, where the Line of Control (LoC) would be formalized and accepted as the international boundary.

But the main factor for this to be opposed by Pakistani is that, the country will get less little control over the region for it desires a greater part. Likewise, political parties of Kashmir would definitely be against it, due to the presence of referendum resolution from United States that would be violated. And (2), Kashmir could go to be an independent   sovereign republic. For sure, most of the Kashmiris would support it since it’s’ tourism being the largest source of income would make them economically viable. But, this would be strongly disagreed for it requires both Indian and Pakistan (also China) in giving up the territory.

To understand where is the crisis is going, regardless of who wins or looses from the battle, the  Strategic Foresight Group (SFG) has presented the facts and figures about the cost of conflict between India and Pakistan(Ismail 2004).  According to relevant information about the military costs, both India and Pakistan are involved in arms race at various levels of lethality or tools. This is made in such manner that the projected figures can tear down images of both countries. The expense for these conflicts should not be taken critically by both countries because the dispute, practically speaking, obliterates them.

To when will the conflict ends is still a question and needs further analysis. Regardless of how superior the prides of both countries go, it should always evaluate its own  status to how long the situation will go,  aside from the battle going within them, there are many more other factors within each country that needs an  unswerving focus to deal with(Ismail 2004). Time to act and give a definite solution at this matter as soon as possible before further intimidation could arise from these two unsettled neighboring country.

Ismail, M. (2004) Cost of Conflict between India and PakistanVolume, DOI:

Causes of Conflict between India and Pakistan. (2017, Mar 28). Retrieved from https://studymoose.com/causes-of-conflict-between-india-and-pakistan-essay 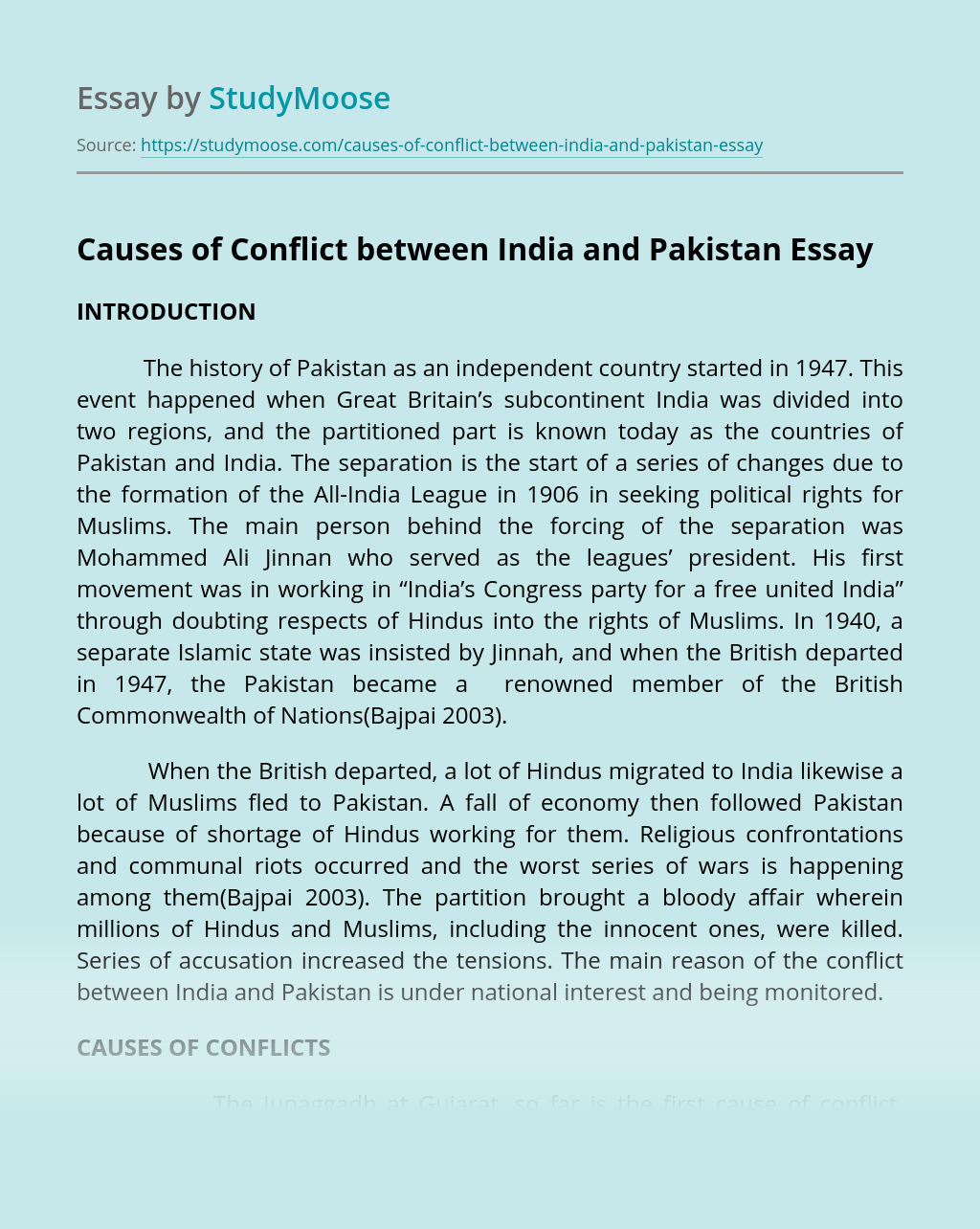 Turn in your highest-quality paper
Get a qualified writer to help you with
“ Causes of Conflict between India and Pakistan ”
Get high-quality paper
Helping students since 2015
Stay Safe, Stay Original