The inauguration of Hitler as Fuhrer in 1934 sparked a change in the German state as Hitler was able to put his ideals into action, bringing tragedy and destruction to the world once again. A springboard for Hitler’s rise to power was created by the Weakness of the Weimar Government, coupled with the conditions created by the Great Depression and Hitler’s own steps to power. Hitler’s ascension to sole leader of the Third Reich is rooted in the experiences of the German people.

Turn in your highest-quality paper
Get a qualified writer to help you with
“ Causes and Consequences of Hitler becoming Fuhrer ”
Get high-quality paper
NEW! AI matching with writer

The implementation of key Nazi foreign and racial policy effectively sucked the world into the cataclysmic vortex of War for a second time.

The experiences of the Weimar Republic during the ‘democratic experiment’ built a strong foundation for Hitler’s rise to power. The events that took place under the reign of the Social Democrats caused the German people to be isolated from their leaders. When the Social Democrats took power in 1918 they were greeted with hostility as they didn’t look like the idealist militaristic leaders.

With the ‘dolchdoss’ legend and ‘November Criminals’ brand having been placed on their heads, the Social Democrats weren’t trusted to begin with. However, the fatal ﬂaw of the Republic lay in the Constitution itself. Article 48(4) allowed the President to take full control in an emergency. This was a terrible mistake as it forever left the door ajar for a return to Monarchy. Mistrust intensiﬁed as the Government was left incapable to deal with extremism, resulting in the people feeling unsafe.

The Ruhr Crisis further alienated the people from their leaders. War bonds paid by individuals were repaid with inﬂated currency and was effectively useless. The resulting hyperinﬂation caused a myriad of negative social effects. As a result, the social situation was created where people came to search for alternatives. Some found their alternative in Hitler and the National Socialist German Workers Party. However, it wasn’t until the Great Depression that this mistrust of leaders came to the fore as the opulence in Germany during the ‘golden twenties’ only acted to delay the inevitable. Germany was in fact “dancing on a volcano.” (Stresemann)

The loan based prosperity of the golden twenties magniﬁed the depression in Germany as the United States called in all war loans resulting in total economic collapse. The Great Depression therefore, is a crucial contributing factor towards Hitler’s ascent to power as the widespread homelessness and starvation further elevated the attractiveness of alternative forms of leadership. During this time, the Social Democrats didn’t help themselves, or their country for that matter. Instead of banding together in a time of crisis, the Reichstag ran amuck with bickering. To try and help the ﬂailing economy the Government opted to increase taxes and implement wage cuts which arguably worsened the Depression in Germany and further entrenched their status in German society. A concise link between the unemployment ﬁgures and increasing Nazi voters can be made as the Party gained the most amount of seats they would ever gain, 230 in July 1932. Hitler himself stated: “Never in my life have I been so well disposed and inwardly contented in these days. For hard reality has opened the eyes of millions of Germans.”

The rapid increase in Nazi popularity allowed Hitler to put pressure on the Government for a high ranking position in the Reichstag. This pressure worked wonders as a seemingly senile Hindenburg awarded Hitler with the position of Chancellor in 1933. Hitler’s own steps to power were geared towards the signing of the Enabling Act. After the ‘accidental’ Reichstag ﬁre, Hitler was able to create a communist scare. He then used this scare as justiﬁcation to force through the Enabling Act. This is a signiﬁcant cause as it enabled Hitler to arrest 4000 of his political opponents and disband the unions, clearing the way for a Nazi majority. However, the 1933 polls did not show this and Hitler had to enlist the support of the Centre Party to ensure victory. Now Hitler had everything, bar the support of the Army. In order to obtain their support Hitler brokered a deal guaranteeing them sole bearers of arms in Germany, if they supported his bid for Presidency.

In order to do this

Hitler had to divest himself rid of his loyal S.A during the ‘Night of the Long Knives’. In 1934, Hindenburg died. The position of President was merged with Chancellor and Hitler became the sole Fuhrer of Germany.

A direct consequence of Hitler becoming Fuhrer was the rapid Naziﬁcation of the German state. Through the excellent work of his puppet Goebells, Hitler was able to saturate the German people, namely in the categories of family, religion and education. During Nazi rule, Goebells effectively put German culture in a ‘Nazi straightjacket’ as the press, literature publications, art and music became domain of the Government. Revolving around the Fuhrerprincep, Hitler’s word was law and while it was easy to indoctrinate the younger and more impressionable generations in Germany, the adults were a different story as they were not as easily persuaded by the spoonful of lies they were being fed. Even at the Nazi Party’s height of popularity, over 50% of people still opposed them. When it came to the adults, a tactic of intimidation was pursued. This tactic was lead by Himmler, who was the ﬁgurehead of justice and the police. He had the SS and Gestapo under his command. During the Nazi reign, suspicion was prevalent, while spying was encouraged.

Another direct result of Hitler becoming Fuhrer was the implementation of his key racial beliefs into action. Hitlers belief of a far superior ‘Aryan Race’ came from a warped sense of social darwinism. Because of the myths of ‘dolchdoss’- (stating that the Communists and Jews were responsible for the end of WW1) and the Jewish Conspiracy (his belief that the Jews and Slavs were trying to dilute the superhuman aryan blood through intermarriage) Hitler had a deep- set hatred for the Jews and other interior races. Hitlers ﬁrst step to ridding Germany of ‘impurities’ came in 1933 with the sterilization law which forced all those physically or mentally handicapped to be ‘ﬁxed’ to ensure the discontinuation of their blood line. In the same year, the purchase of Jewish goods and the practicing of Jewish professionals were banned. In 1935, the Star of David was a symbol that those of Jewish lineage were forced to wear, as the Nuremburg Laws took effect. Later in the piece, in 1938 on Crystal Night, thousands of Jewish homes, businesses and synagogues were destroyed, which forecasted the start of the Holoucost. Finally, during World War Two; Jews, Slavs, Roma, disabled, homosexuals and those of different religion were forced to encounter hell as they were sent to concentration camps, which resulted in the slaughtering of an estimated 21 million people, including 6 million Jews.

Hitler taking power had negative consequences on the whole world, due to his changes in foreign policy. Hitler’s changes to foreign policy were geared towards destroying the ‘diktat’ Treaty of Versailles. He achieved this by re-occupying the Rhineland, re-arming and achieving Anchluss with Germany’s traditional ally- Austria in 1938. His changes also revolved around the concept of “Ein Volk, Ein Reich, Ein Fuhrer” which encompasses the idea of one people, one nation and one leader. Hitler used this concept as justiﬁcation to take be handed the Sudetenland at the Munich Agreement as the Sudetenland Germans were part of the collective ‘one people’. Appeasement set the ball rolling for Hitler as he quickly took over the rest of Czechoslovakia and invaded Poland in 1939, signifying to the Allied powers, the start of WW2.

Hitler’s rise to power in 1934 was the result of a perfect storm in Germany. The weakness of the Weimar Government and the conditions created by the depression constructed a springboard for Hitlers rise to power. With his own steps taken to indoctrinate the German people and implement key Nazi foreign and racial policy, Hitler started a snowball effect, leading the allied powers to declare war on Germany, eventually resulting in a global conﬂict with devastating consequences. 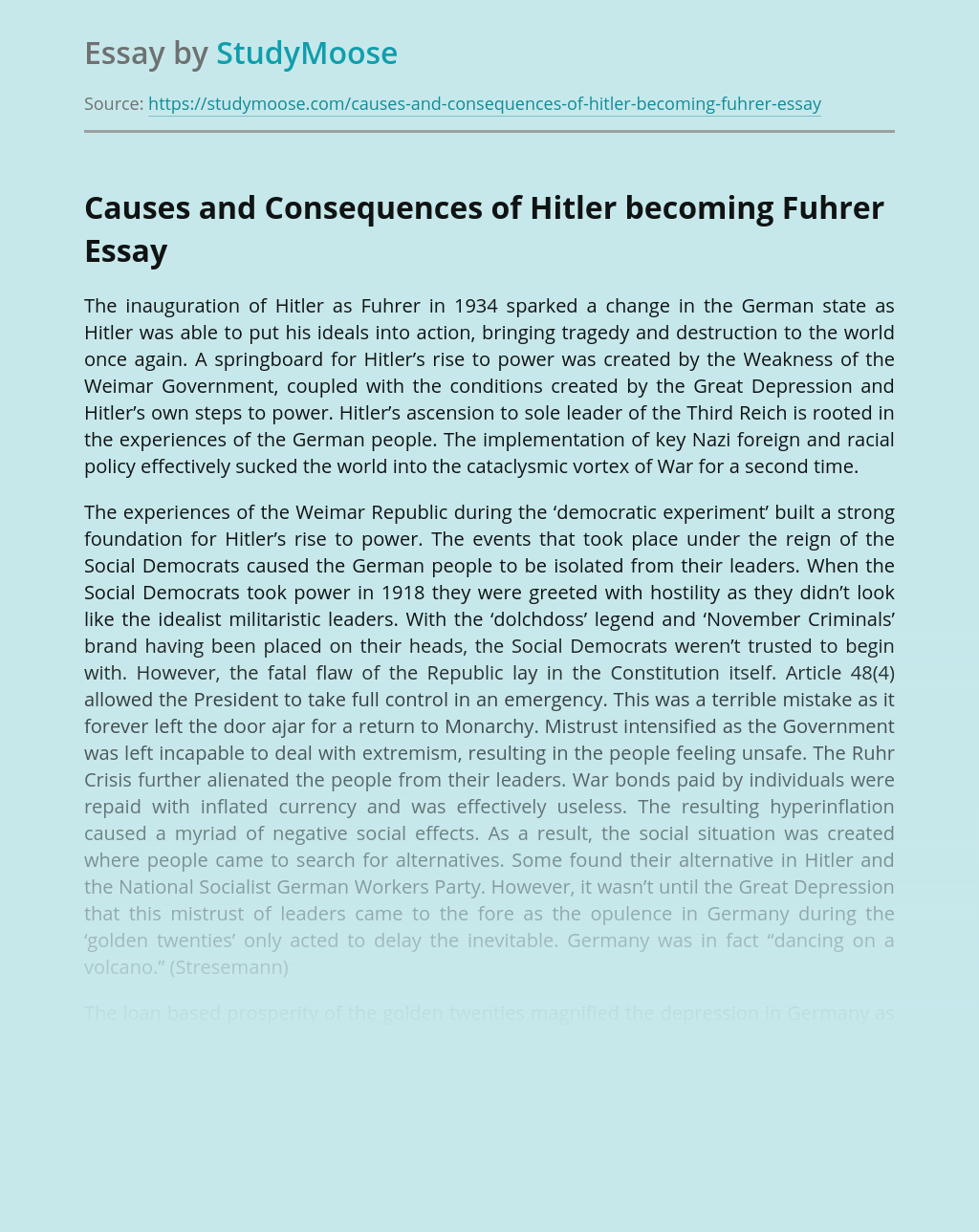 Turn in your highest-quality paper
Get a qualified writer to help you with
“ Causes and Consequences of Hitler becoming Fuhrer ”
Get high-quality paper
Helping students since 2015
Stay Safe, Stay Original