Q 1: How would Xerox define Diversity? How has the definition changed over the years? A 1: Diversity means more than race and gender. Diversity means creating an environment where all employees can grow to their fullest potential. The first chairman of Xerox, Johnson C. Wilson had the commitment to diversify. Chairman Wilson took proactive steps to create a more diverse workplace in response to race riots in the 1960s. He called for increased hiring of African Americans in order to achieve equality among its workplace.

Throughout the 1970s Xerox established an internal affirmative action office and began to hire significant number of minority employees. Xerox placed an emphasis on the advancement of minorities and females in the 1980s.

It was during that Barry Rand, an African American, was named the first minority president of a division. In the 1990s sexual orientation was included in the company’s Equal Opportunity policy. Xerox has 50% of its workforce made up by women and minorities. Of that 50%, 48.

2% are Xerox’s senior executives. In 2007, Ursula Burns was named the first African American female president of Xerox Corporation. The definition of diversity was changed by Anne M. Mulcahy. She said Diversity was the key to success. Diversity breeds creativity. Companies ruled by a hierarchy of imagination, and filled with people of all ages, races, and backgrounds challenge each other’s underlying assumptions, freeing everybody from convention and orthodoxy. In summary:

According to Xerox, diversity is more than just race/gender/numbers. It is about inclusion! By including people of all ages, races, and backgrounds, Xerox can create a place where employees can grow to their fullest potential with their different ways of thinking, perceiving, and creating innovative solutions.

They believe diversity=innovation=success. Over the years you can Xerox maintain their strong focus on diversity. In the 60’s they hired African Americans to improve equality in the workplace. In the 80’s they continued hiring minorities AND women, and in the 90’s hired many of different sexual orientations.

Q2: What are the seven reasons why Xerox should be motivated to diversify their workforce? Illustrate how Xerox shows it values its workplace diversity. A: 1.Diversity means different ways of thinking, perceiving, and innovating. Innovation is the reason they are at the top of their industry. 2. Diversity creates productive people. Hiring people of different minorities and backgrounds improves equality and enhances individuality and increases productivity. 3. Diversity is highly respectable. In today’s day and age, America has become very diverse. And to diversify one’s company along with the country will result in respect. Xerox has been named one of the Top 10 companies by Fortune, Forbes, Working Mother, Latino Style, and Enable magazines. 4. Diversity spurs creativity. To enjoy work, feel included, express individuality, and use owns different outlook enhances creativity among employees.

5. Diversity instills commitment. Xerox values diversity from entry-level positions up to the highest seat in the house. With a female African-American as the president encourages employees that anyone can do it and commitment is powerful. 6. Diversity serves as an inspiration for other companies. Diversity for Xerox is inspirational. Their logic and beliefs for diversity truly benefits them and their employees and it is evident through their success and ranking. Diversity in the workplace represents the real world: a place of different religions and beliefs but they all have the same skills, high work ethic, and devotion. 7. Diversity has been working and going strong. Because of success with diversity, Xerox should continue focusing on it. They have a 100% rating on Human Rights Campaign Foundation’s Corporate Equality Index and its Best Places to Work survey. Illustration is a chart: This chart demonstrates diversity in the Xerox company.

3. Xerox defies the leaking pipeline phenomenon. The leaking pipeline is something that explains that women don’t have enough senior positions in the workforce, and then leave before they have the opportunity to receive them. Xerox defies this because they, from the beginning, have been committed to the idea that whoever is right for the job, regardless of background, gender, or sexual orientation, will get the job. This commitment not only enables women to reach those higher positions, but also gives them the motivation to keep working hard and not abandon the business out of fear the company might not promote women.

4. No one can argue that Xerox has not taken major strides towards diversity within their corporation. After all, Xerox made history when Ursula Burns succeeded Anne Mulcahy as its chief executive officer (CEO) in July of 2009. This transfer of power marked the first time ever that a female CEO of a Fortune 500 company was succeeded by another female. As historic as this female to female hand-off was, what made it even more remarkable was that fact that Ursula Burns is also an African-American. With this in mind, one may naturally ask, “How do women and minorities within the upper management of other Fortune 500 companies compare to Xerox?”.

In order to answer this question with authority, our group sought out many reliable sources such as established magazines, think tanks, and websites devoted entirely to the task of tracking, analyzing, and encouraging the idea of diversifying our corporate world. Moreover, since our case and its’ questions were published in 2012, we found it best to compare the other companies to Xerox as they stood in 2012 as well. Lastly, our group also assumed that “the highest levels of each organization” refers to the corporations’ CEOs and their board of directors.

According to the Huffington Post, in 2012 only eighteen (or 3.6 percent) of the five hundred chief executive officers comprised of the Fortune 500 corporations were women1. Of these eighteen eighteen women, only one other was of a minority status – Indra K. Nooyi of Pepsico. Mrs. Nooyi is of Asian/Pacific descent, more specifically, Indian. Hence, with this data we can gather that in 2012 the number of minority women CEOs in the Fortune 500 was a mere two. Comprised of these two were one African-American, one Asian-American, and zero Hispanics. In total, less than one half of one percent of the Fortune 500 CEOs in 2012 were held by minority women. This startling statistic proves that women and minorities are extremely under-represented in the Fortune 500 CEO class.

With women occupying eighteen percent of the CEOs positions of 2012’s Fortune 500, the remaining eighty-two percent of positions were occupied by men. Minority men fared better than their female counterparts, but not by much. With a little bit of algebra and data obtained from The Center for American Progress2, one can calculate eight men of Asian descent (1.6 percent), six men of Hispanic descent (1.2 percent), and three African-American men (0.6 percent) held the titles of CEOs within the Fortune 500 of 2012. The four hundred sixty-five (93 percent) residual positions were all held by Non-Hispanic white males.

When we expanded our search to include all of the board members for each each of these companies we were greeted with slightly better news. According to Missing Pieces: Women and Minorities on Fortune 500 Boards the report published in 2012 by the Alliance for Board Diversity (ABD), women and minorities combined accounted for 13.3 percent3 of all of the Fortune 500’s board members in 2012. The ABD ranked Xerox as the 35th most diverse board that year. Xerox cares about diversity and it shows.

There are many things that other corporations can do to increase diversity in their workplace. For example, human resources personnel can host recruitment events in ethnically diverse areas, such as inner cities. Placing ads in cultural papers, leaving fliers at different churches, and participating in a job fairs may also lead to finding more diverse candidates to apply for and fill their needed positions. With a more diverse staff, more companies can expect an influx of ideas, new talents and perspectives, and increased returns on investments. 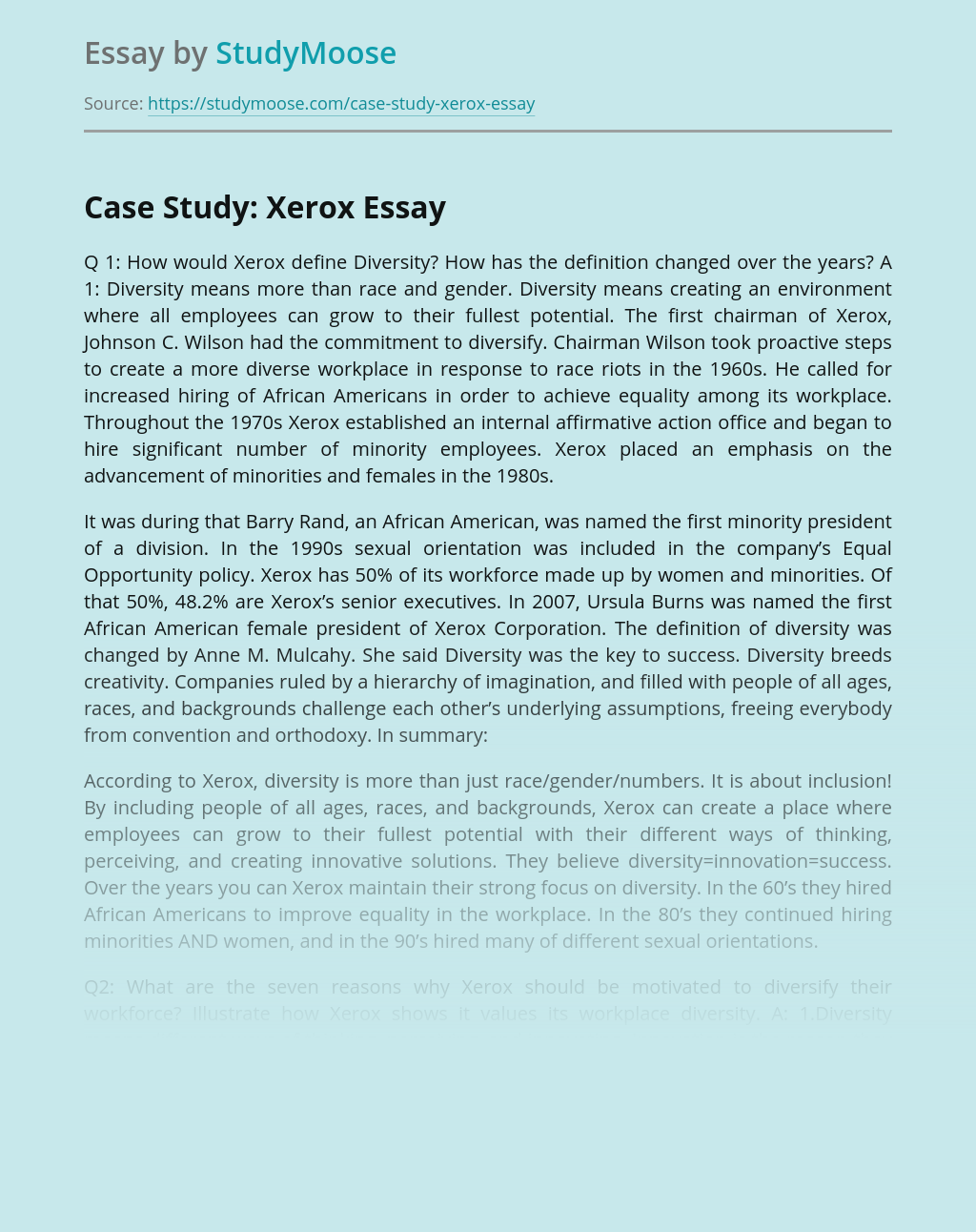