What Do People Do When They Are Leading: Ursula Burns, Xerox CEO?

What Do People Do When They Are Leading: Ursula Burns, Xerox CEO Ursula Burns was the first black woman CEO to take over a major US company and transition to that role from another woman (Byrnes & Crockett, 2009). Ms. Burns started as an intern with Xerox in 1980 and has worked with the company permanently since 1981. Her path required a transition from her engineering roots with involvement in the organizations major transitions to color copying, reducing the workforce by 40%, Xerox’s transition from manufacturing, and its growth in managerial diversity.

Don't use plagiarized sources. Get your custom essay on
“ What Do People Do When They Are Leading: Ursula Burns, Xerox CEO? ”
Get custom paper
NEW! smart matching with writer

Since her takeover in 2009, Xerox continues to transform into a technology service based organization (Howard, 2013) with over 50% of their $22.4 Billion of revenue coming from IT based services.

Leadership Style and Philosophy-Personal and Organizational Values The words and deed of organizational executives are under constant scrutiny. The CEO of an organization has to represent values and philosophies consistent with the company they represent. Xerox’s core values of innovative technology usage, delivering excellence, and corporate citizenship align well with Ursula Burn’s mind set of “checking out”, redefining balance, and getting back to basics (Kwoh, 2013).

While Ms. Burns is a very hard working executive, she absolutely believes in not taking things too seriously. In an interview during the 2013 Most Powerful Women Conference, her advice was to “chill out a little bit” (Burns, Ursula Burns: ‘Chill out a little bit’, 2013). She firmly believes that life is for the here and now. She espouses valuing having fun. Putting in the hard work is required but you can and should make a conscious decision to pick your moments of greatness.

If you aren’t having fun in what you do you may be too busy to “see” your opportunity to excel. Redefining Balance/Technology Usage

Women often face the age old question of “can you have it all?” Many women think that they have to be more like their male counterparts to be successful. They take on “male defined” work long, hard, and always work mantras. Ms. Burns believes that this question sets many women up for failure. Her advice is to find balance over an entire career instead of daily, weekly, or monthly time lines (Kwoh, 2013). Since Xerox is an innovator in technology, the company is in a unique position to maximize its technology to the advantage of their employees. They have communication hubs that allow great flexibility for their employees and provide another tool for maintaining effective work/life balance. Getting Back to Basics/Corporate Citizenship

Ursula Burns remembers the advice of her mother, ‘You have to give more than you take away from the world’ (Bryant, 2010). That’s why she focuses great energy in giving back. Ms. Burns fosters this conviction through Xerox’s commitment to corporate citizenship. There are over twelve thousand employees engaged in 713 community service projects (Xerox, 2013). In addition she personally sits on the White House Committee on Science, Technology, Engineering, and Math Education (STEM) and works a plea for STEM education into every speech (Fast Company Staff, 2011/2012). CEO Influence on Ethical Behavior

An organizations CEO acts a role model for behavior within the corporate structure. Whether it is a decision to not take an excessive bonus, or public behavior, CEO’s are always under review. The CEO can influence behavior in both positive and negative ways. For instance, ethical lapses by employees thrive in environments that result from inappropriate executive officer behavior such as insider stock trading, expense account fraud etc…. If the leadership models behaviors of low integrity and corruption, then it will be manifested at all level. The same can be said for environments that cultivate trust, diversity and growth. For Ursula Burns, it is all about “having people understand and align and feel engaged, getting passionate about what they do” (Bryant, 2010). That what she brings to the leadership seat at Xerox. CEO Qualities, Strengths, and Opportunities

Strengths
Three compelling strengths of Ms. Burns are her adaptability, her intellectual horsepower, and her commitment to Xerox Corporation. Ms. Burns did not make an easy choice in her academic studies. Her early catholic school guidance counselors gave her three choices for her future nursing, teaching, or a nunnery (Burns, Xerox’s Ursula Burns on Her Career Path and Changing Company Strategy, 2013). In a time when women, particularly those of color, were not studying sciences, Ms. Burns did her undergraduate studies in mechanical engineering at New York University and followed up with a Master’s Degree in mechanical engineering from Columbia University. However, she didn’t just confine herself to engineering. Ms. Burns’ tenure at Xerox started with an internship in 1980. She worked her way through several business teams including the office color and fax business and office network printing business. She was ran Corporate Strategic Services, and led Xerox’s global research which included product development, marketing and delivery. She became president of Xerox in 2007.

This expanded role included the company’s IT organization, corporate strategy, human resources, corporate marketing and global accounts. She was also elected to the company’s Board of Directors. Burns was promoted to chief executive officer in July 2009 almost 30 years. In a time when changing organizations was the norm for growth, Ms. Burns made an art of “staying put” In the late 1990’s Xerox faced a crisis. The stock was losing value and the company was losing the battle of technology to foreign competition. There was no faith in the leadership and cash reserves and prospects were low (Fast Company Staff, 2011/2012). Ms. Burns was ready to leave when Anne Mulcahy took over and asked her to stay. Burns led the change in organization outsourcing which helped ultimately turned the company around. By 2004 the company had returned to profitability. In 2010 after her ascension to CEO Burns led the acquisition of Affiliated Computer Services which gave brought Xerox into its current mainstay in the processing market. Opportunities

Ms. Burns’ early leadership opportunities were all qualities that she worked hard to move toward center. The list included conversational savvy, over managing, and patience before taking action (DEUTSCH, 2003). The head of Xerox is not known for mincing her words, however over that last few years she has learned to soften her tone and make room careful consideration. The previous over managing may have been the result of the financial turmoil the company experienced during her formative years. She has since learned to be strategic and willing to trust her leaders while always “staying curious” (Kwoh, 2013). Impatience is certainly no longer a challenge unless it impatience with moving her agenda forward. She sees her role as that of making the right choices. “Choices are a rich man’s problem. I prefer that problem to having no choices.” (Burns, Xerox’s Ursula Burns on Her Career Path and Changing Company Strategy, 2013) Qualities

Ursula Burn’s best quality is that she stays true to her roots. She is consistently aware of the fact that she is an African American woman from New York City raised in less than ideal circumstances. She remembers her mother’s advice about forward thinking and appropriate behavior. “Where you are is not who you are… Don’t act like you’re from the gutter because you live in a place that’s really close to the gutter”. She has chosen to stay true to herself and her NYC lingo including speed and some colloquialism. “What I realized was I have to know my content and know what I want to say, and be significantly less concerned about how I say it…I can’t try to say it in somebody else’s voice. I have to say it in my voice” (Bryant, 2010) Conclusion

Ursula Burns has spent over thirty years growing a career with Xerox. She held many roles across the organization which have been critical to her current success as CEO. Since her transition to CEO, Ms. Burns she has begun to drive a promising reputation the processing business which sets Xerox up for sustainability in the market.

What Do People Do When They Are Leading: Ursula Burns, Xerox CEO?. (2016, Mar 21). Retrieved from https://studymoose.com/re-what-do-people-do-when-they-are-leading-ursula-burns-xerox-ceo-essay 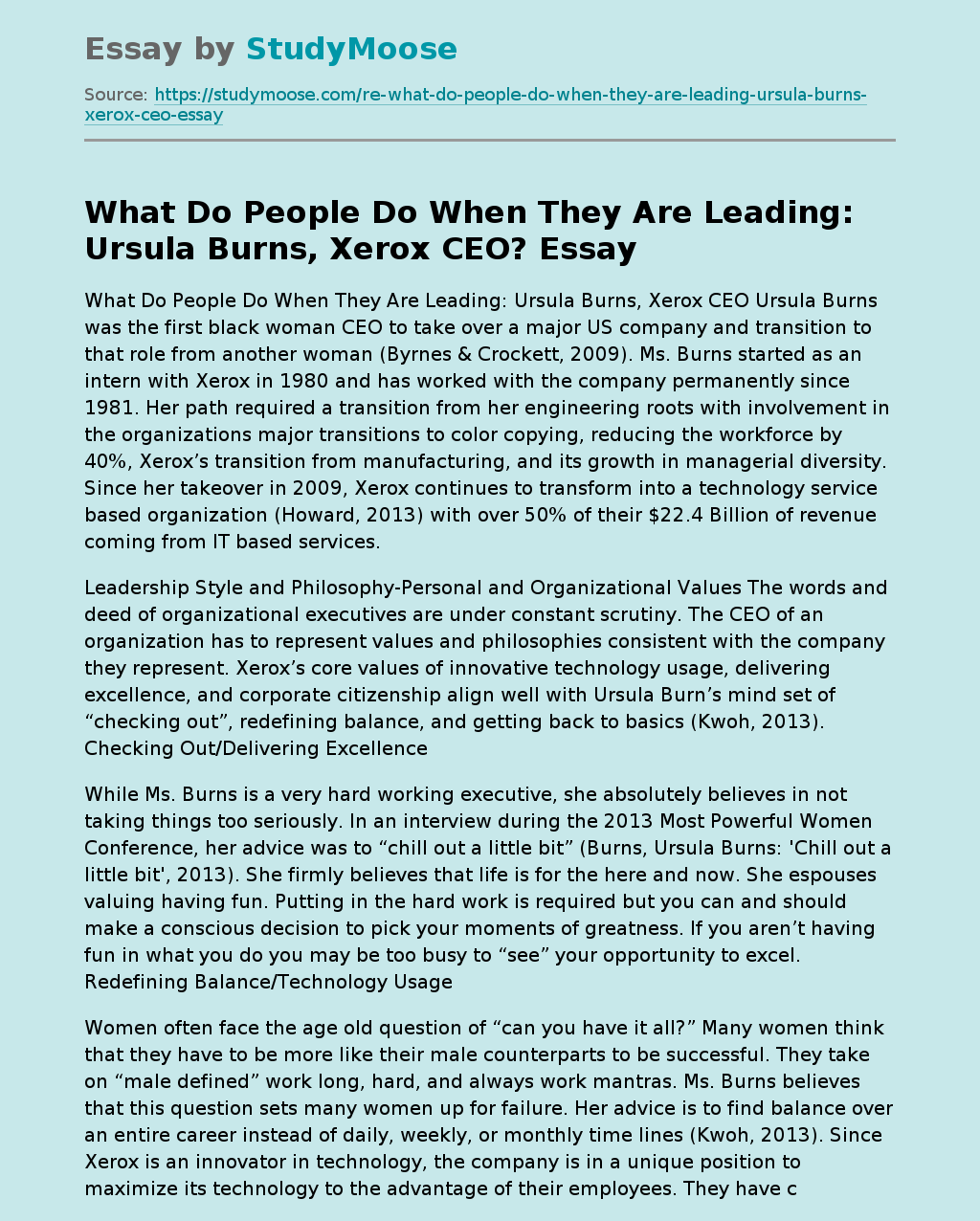