Why did Xerox fail to implement their plans?

The factors that affected the sales’ decline were poor executives relations that resulted to conflicts instead of changes that would have been converted to sales, introduction of foreign competition who sold cheaper machines when their patent licenses were expiring, investors’ lack of faith, costly entrance into the inkjet market and Brazil subsidiary’s problems with foreign currency rates. Thoman tried to use the eight steps to transforming his organization but failed to implement most of it.

He attempted to give the company a sense of urgency by reviewing the product line and finding out that Xerox was below par especially against Japanese competition.

Don't use plagiarized sources. Get your custom essay on
“ Why did Xerox fail to implement their plans? ”
Get custom paper
NEW! smart matching with writer

However, he observed that whenever he put people in groups to solve the problem, it ended in heated discussions with no positive results. He also tried step two by forming his own group of executives that match his visions and was able to put supportive people in the positions of European president and heads of retail distribution, corporate strategy and of outsourcing subsidiary.

He wanted to replace the VP for finance but he got fired before implementing this. In short, he also failed to establish a coalition that could have supported his changes. He tried doing step three by wanting to push the company into colored inkjets and software development but failed to communicate this well to his subordinates because it meant reorganizing the sales department and reinventing its staff from salesmen to systems consultants.

He failed to do the rest of the steps because he got entangled with the beurocracy of the company.

Thoman was not “charming” and was not able to communicate well enough to get some ideas that could have come from other employees. He made drastic changes without foreseeing that these needed to be supported by the employees below the ranks. Now with Rick Thoman replaced by Anne Mulcahy, Xerox has finally turned around.

Some of the eight steps were used to help Xerox rebound. Mulcahy was able to give the company a boost because she had the support of the board, created a vision by announcing her strategy, communicated well below the ranks by a marketing campaign and talking with many employees to make them aware of the possible changes their careers would undergo. In fact, a memo called “Turnaround Talk” is regularly issued to update the employees on the status of the company.

She restructured the company by incorporating the Palo Alto Research Center to Xerox which in turn brought down the labor force from 98,000 to 67,800 within three years. The company has been able to turn around because by the end of 2002, it was finally able to report a profit of $91 million and in 2003, $360 million. Mulcahy’s efforts are paying off and with her efforts to keep the company’s morale and cooperation, Xerox will remain in the business solution race and probably even succeed in getting back its former status in the industry.

Why did Xerox fail to implement their plans?. (2020, Jun 01). Retrieved from https://studymoose.com/case-study-xerox-856-new-essay 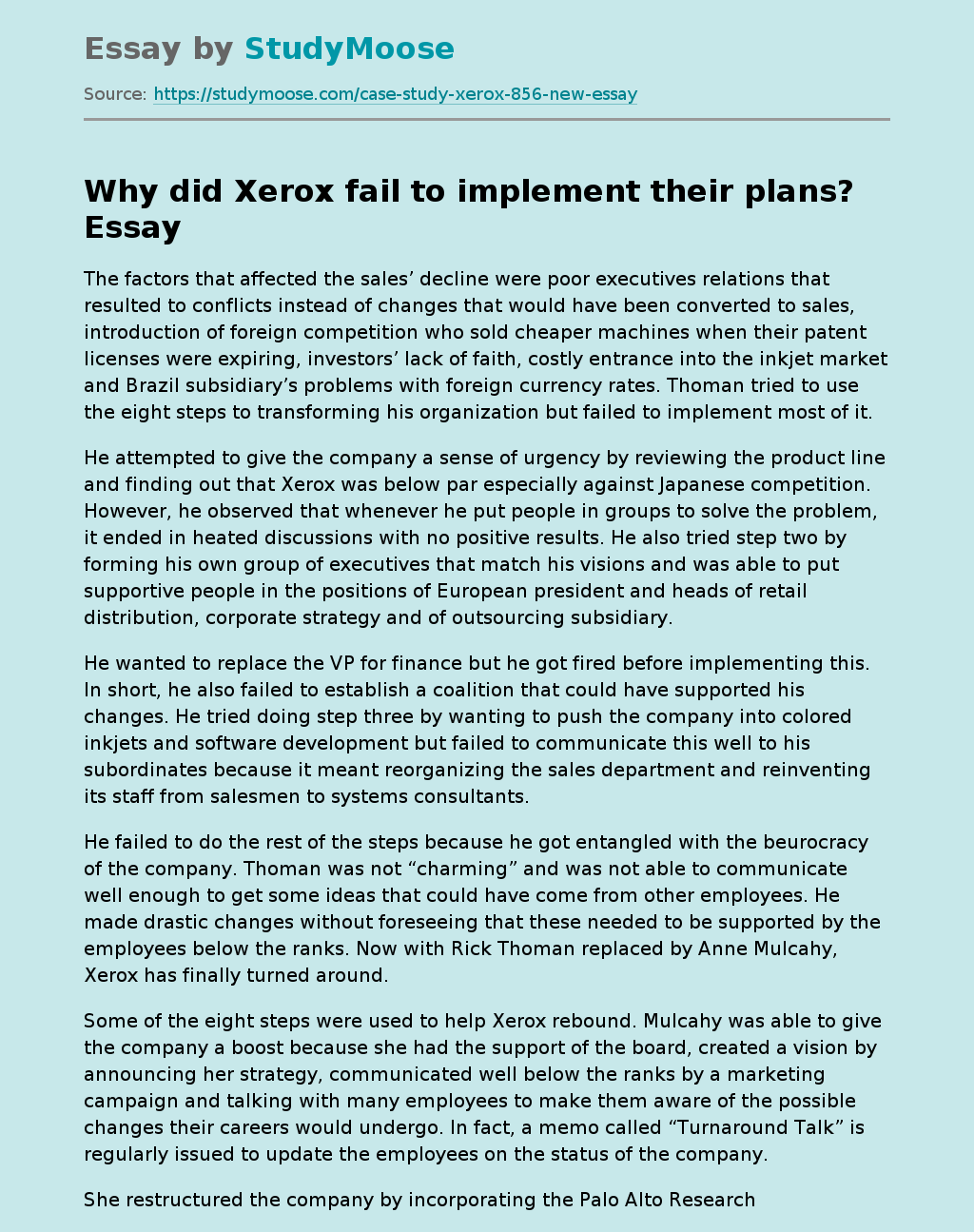