The study of Tuskegee Syphilis study case was to find out the extent of the untreated syphilis in urban areas and the way to stop it by carrying out a research on the affected ones which comprised of 400 men in Alabama, especially among the blacks, “the USPHS conducted studies in the rural South to determine the prevalence of syphilis among blacks and explore the possibilities for mass treatment” (Brandt, 65).

The study of Tuskegee syphilis study had it results and consequences.

Don't use plagiarized sources. Get your custom essay on
“ Racism Research the Case Study of Tuskegee Syphilis Study ”
Get custom paper
NEW! smart matching with writer

It was misunderstood and therefore it was highly criticized. The results of the research were helpful since they led to finding out the root cause of the intense increase of syphilis in blacks. The consequences were far worse since the participants were not informed of the actual intentions of the research because the doctors believed that they would reject the ideas and therefore violated their human right of consent (Brandt, 66-67). It led to the death of people since the researches knowingly did not treat the patient even after finding out the right antibiotics for Syphilis.

The consequences of the study brought about the establishment of boards and legislations to govern research and stipulate its rules for all the research to be carried out. The study also raised issue about the professional ethics since they used human to experiment on their research and used deception to gain their trust and it showed more of racism than medical issues.

The study case of the Tuskegee will not be replicable because it was carried out without the consent of the participants that is, the people being tested and therefore it violated their human rights and it was based on one race that is the blacks creating racism conflicts (Brandt, 66).

The research was highly criticized and therefore it would be every hard to replicate due to its extent of withholding medicine and also the regulation that are stated out can only allow it if the research follow them to the end.

The study of the case of the Tuskegee was unethical. In each field of professionals there are rules that are set to govern the field and the professors in carrying out their duties in this case the medical ethics was not practice and this made it unethical (Brandt, 67-68). The participants in this lab experiment had the medicine to cure the syphilis but instead their withheld it knowingly from the patient and some died a painful death and others suffered from different ailments. Also it was unethical since the researchers did not ask for the consent of the participants instead they gave promises and did not fulfill them and it was racial based research no whites were involved (Brandt, 27).

Sociological perspective tries to explain the impacts of the study in our society today; in the case functional perspective is the need for people to be healthy so that the society will function well. The communities in general should provide health centers to be able to treat people in the society. Sociological perspectives presented in Tuskegee syphilis study sociological conflict as the one raising from the study is based on the ethics since the research was against the ethics of research and also human rights (Brandt, 70-71). It disregarded the right of human beings in terms of withholding the medicine from the patients and also the issue of racism in medicine is also a major problem that needs to be eliminated. The distribution of medical resource should be distributed equally. Interactionists focus on how people learn about an illness and also the role of media and others to spread the awareness of the illness. By interacting with one another the severest of any sickness in the society because they will be able to find a cure. 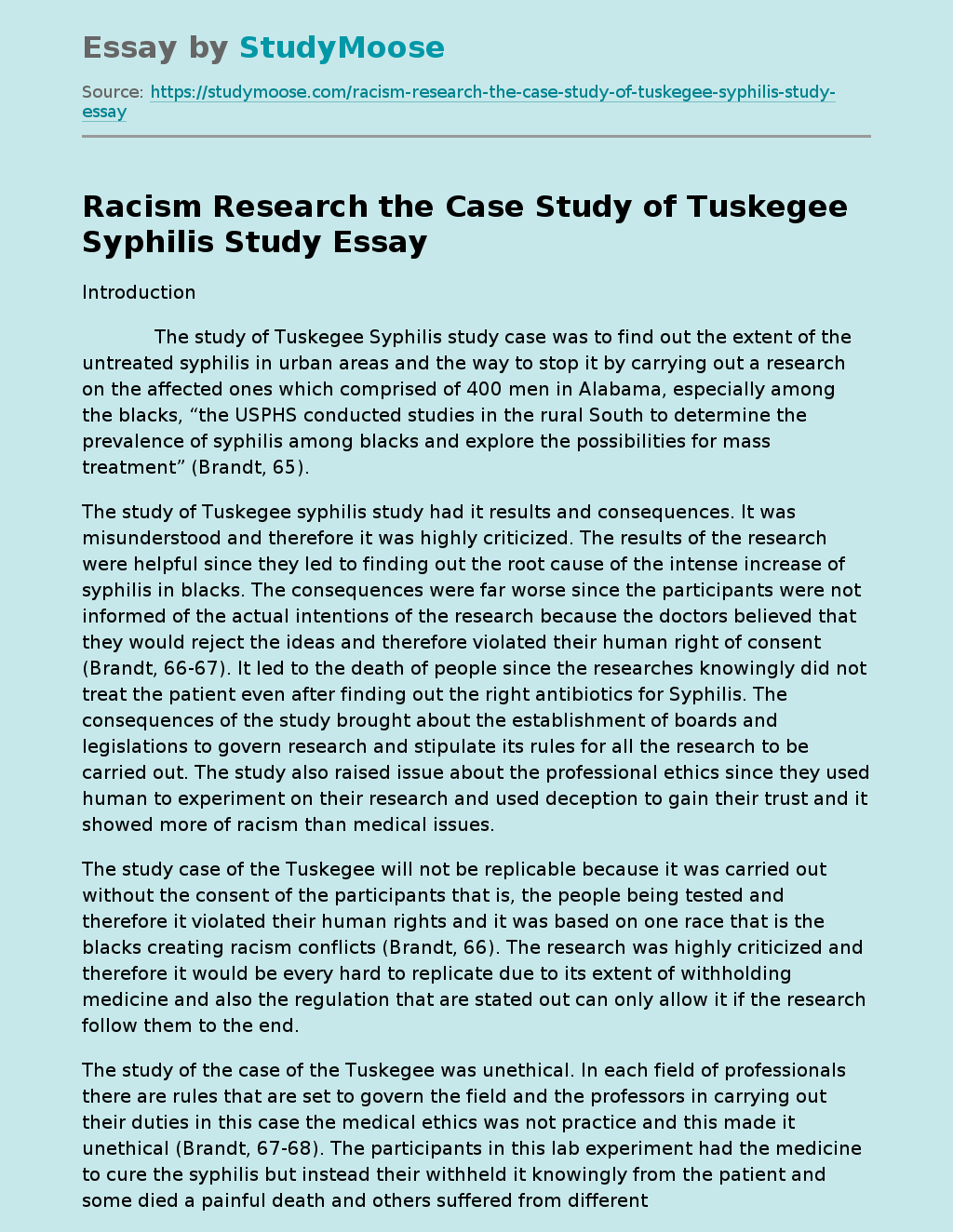