1- April Whitlock received e-mail from Mommy bloggers requesting financial assistance to attend the upcoming bloggers conference. Bloggers promised a ward of mouth and written reviews about Carolina Pad Company. April must consider that bloggers hadn’t promised favorable review, just review. Also, she worried there was something dishonest about the case: wasn’t implicit that the reviews would be favorable? Moreover, is the act an ethical or not and would the payments be in violation of Carolina Pad’s Mission and Values statement.

Don't use plagiarized sources.
Get Your Custom Essay on Carolina Pad and the Bloggers Just from $13,9/Page

Finally, if she declined the bloggers’ request while questioning their ethical standards, would her relationship with any of the bloggers become strained?

2- April firmly believed the promotional considerations theses bloggers were offering could provide a significant higher rate of return for Carolina Pad than the company could receive from others such as advertising. Also, she realized that her competitors were receiving similar requests from these or other bloggers, and many of them were benefiting already from paying such requests.

But, April also thinks that there are some dishonest about the whole situation and bloggers didn’t promised a favorable reviews and if is an ethical scenario or not.

3- If April agreed to pay the bloggers, the following stakeholders will be effected: a. Bloggers will be satisfied and received money for their job b. Carolina Pad company reputation and revenues will rise if the review is good, but it might enter in unethical stage which will affect its mission and values statement. c. Customers will be willing to buy more of the company products due to the good reviews. d. Employees such as April will be affected by getting better positions in the company due to the increase in company revenues, but it might affects their beliefs about the company mission and values statement.

4- In Virtues Method, honesty, loyalty, and respect from customers and employees will be affected badly if April decided to pay the bloggers. In Utilitarian Method, the benefit the company will receive from paying this small cost amount will be very high and the repetition will increase if April agrees to the deal. In the Rights Method, the right of speech will be influenced if the bloggers to take the payments and they will be force somehow to say only good things about the company. In the Justice Methods, the customers will be affected by false reviews about the company products which is not fair for them to buy products that they received different reviews or false about them.

5- I think April shouldn’t pay the bloggers their financial support demand because it will affect the company Mission and Values statement badly. Also, the company repetition and revenues are at a high level at the moment. The company doesn’t any good reviews from paid bloggers to increase its values, repetition, and revenues.

Carolina Pad and the Bloggers. (2016, Apr 01). Retrieved from https://studymoose.com/carolina-pad-and-the-bloggers-essay 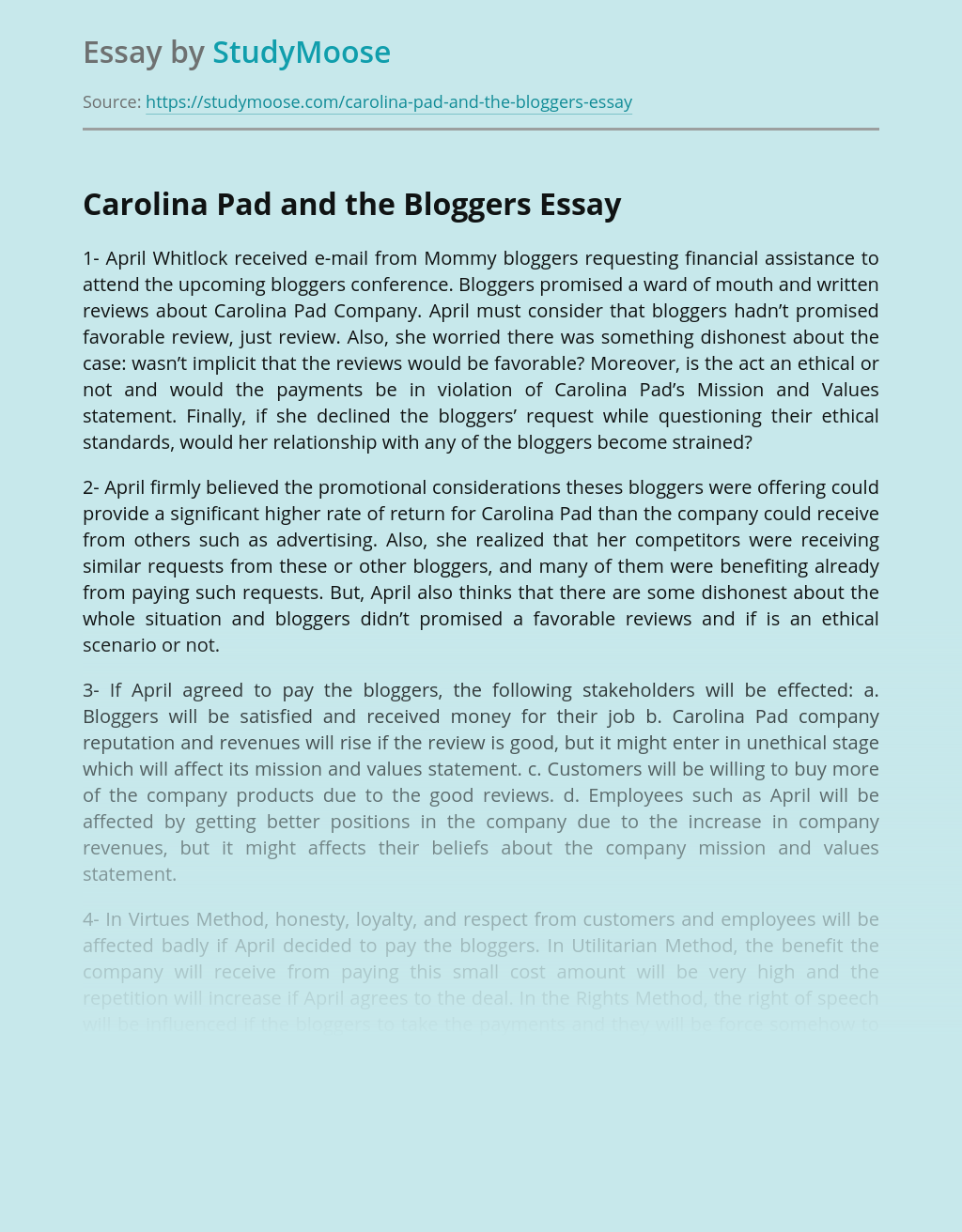 Some cultures totally blend together, while others just clash. The cross-cultural approach observes how different cultures act towards one another; their similarities, their differences, and how well they tend to get along or do not get along. In NextNC, an article was written by Erin Frustaci, Hippie Culture, the article mentions how the “new age...

Within the next ten years, we will have photorealistic gaming . In conjunction with the anticipation of ne xt-generation consoles coming in 20 20 , graphics sho w a continuous trend of improving to the point of hyp errealism . Already we are saying th ings akin to “wow, look how realistic th e skin...

Get Essay
Reign Over Me Evaluation

Depression affects all people. Reign Over Me is a movie that deals with a character in a grave state of depression. In Charlie Fineman’s (Adam Sandler) case depression hits hard and leads to a major behavioral change. Fineman blocks out major parts of his life including his college roommate, Alan Johnson (Don Cheadle). After running...

First performed in 1943, the play “confronts one of the great contradictions of modern life the impossibility of being good while participating in the market”. Shen Te, as her character is explored throughout the play and contrasted with the prudent split personality of Shui ta, is a hopelessly magnanimous giver. Her attitude of giving borders...

Psyche of the Survivors in Art Spiegelman's Maus

Maus is a graphic novel, which is created on the basis of conversation between the author, Art Spiegelman and his father, Vladek Spiegelman. Since Art is a Cartoonist, he wanted to express the experience of his parents as the survivors of World War II, in the form of comics. But, when he started doing his...