B.F. Skinner, who favored the behaviorist approach to psychology, criticized the psychoanalytical theory by suggesting that psychology should be the study of behavior and not just the mind. However, Skinner’s approach was radical, in that he did consider our inner thoughts and feelings, but denied that they had anything to do with behavior. His study of behavior involved close contact with the experimental laboratory, where he experimented with small animals such as rats and pigeons. As the experimenter, he was able to study the use of stimuli and reinforcement of behavior.

Don't use plagiarized sources. Get your custom essay on
“ Carl Rodgers and B.F. Skinner ”
Get custom paper
NEW! smart matching with writer

Skinner pointed out that aggression, like any other form of behavior, is a result of social and physical issues in our environments. With this in mind, he believed that human behavior is therefore controllable. In Skinner’s view, if aggression is apparent in a person, then it is determined by past and present relevant events, together with genetic endowment, hereditary factors that are passed through our genes in the process of evolution.

He argued that full knowledge of these two sets of factors, genetic endowment and personal history; hold the key to controlling behavior such as aggression.

The behaviorist approach fails to acknowledge individual free will and choice however, and the frustrations involved in the inability to express these. It is often these unobservable issues that cause behaviors, such as aggression. When looking at positive reinforcement, Skinner often refused to consider the mental causes of aggression. For example, if a drunk tries to start a fight with you in a pub, Skinner’s theory would indicate that the best form of action from previous experience would be to walk away.

This however, ignores the events leading up to this point, and you may decide to stay and fight or maybe stay and make friends. The mind selects a response according to the desired consequence, which is a natural part of every function we perform but is not a straightforward case of positive reinforcement.

Sigmund Freud developed the psychoanalytical theory of the personality, where he divided it into layers; the unconscious, preconscious, and the conscious. These represented different levels of awareness in our minds. He also described the personality as the id, which is essentially what we are born with and is where the basic sexual and aggressive drives reside, the ego, which starts to develop as soon as interaction with the environment begins, and the superego, which represents the moral aspect of humans according to society’s standards and values. He believed that we are born with these inner feelings of aggression, which we use as a tool to obtain the things we want, but unfortunately, society restricts the use of this horrible behavior for obvious reasons.

The display of aggressive behavior would cause us to lose love and respect ending in lowered self-esteem. In order to get through life without imposing this unacceptable behavior upon society, we have in our superego, incorporated something called ‘guilt’, which in turn makes us feel ashamed of this pushy, demanding insistence of gratification side of ourselves. However, this causes within us an eternal conflict that rages on through our everyday lives, in the unconscious level of our minds, where we only dimly recognize it.

Carl R. Rogers was the founder of the humanistic approach to behavior and like Maslow, he believed that there was nothing ‘bad’ about human behavior and that we are capable of healthy growth towards Self Actualization. This means that we have the potential to reach fulfillment and achieve warm relationships with others through acceptance and understanding of what we as humans are.

In order to understand the actualizing tendency, Rogers claims that we should firstly be congruent, meaning that we should be aware of our inner feelings and accept them as a part of our nature. In this respect, what we express from those feelings is pure and true. Secondly, we should be able to empathize with our fellow man, in that we can understand what everything means to them from their point of view, as if we were in their world. Thirdly, we should be able to accept things as they are and who our fellow man is, without judgment or prejudice. These are three essential ingredients for healthy growth towards being a fully functioning person. Obviously, with an approach such as this, there is little room for negative feelings such as aggression.

Because of this positive force for healthy growth, Rogers believed that aggression could possibly be a result of a state of incongruence, where we may feel conflict between our sense of self and our ideal self. For example, when we become aware of our own set of values but are told by our parents to respect their set of values, taught to us previously, and the use of conditional regard is applied to enforce those values. This could possibly cause aggression by way of retaliation. However, he would not see aggression as inevitable or even an appropriate response, only as a possible response. 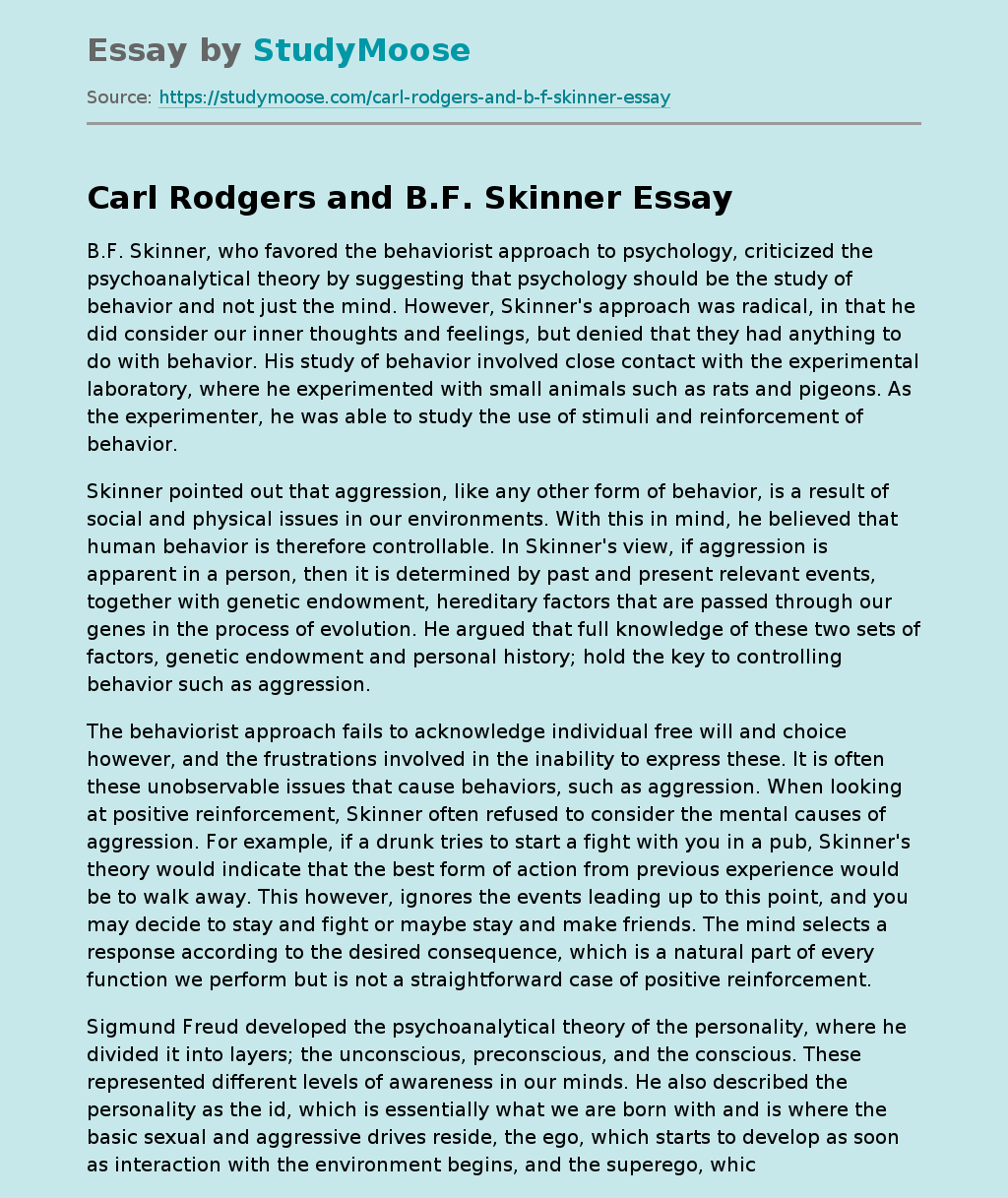