When you think of punishment and reward you think of a reaction; but man has come up with theories of why we do the things that we can do. Conditioning and learning is defined as change in behavior, which is resulted by different types of practices and experiences. In this report the main topics will be classical conditioning, operant conditioning, cognitive-social learning, and neuroscience and evolution. Every time we do something good or bad the outcome determines our reactions in future situations.

Don't use plagiarized sources. Get your custom essay on
“ Skinner’s Behavioral Theory of Reward ”
Get custom paper
NEW! smart matching with writer

This learning process that is associated between environment stimuli and behavioral responses.

Breaking down the rewards system you come along reinforces and reinforcement. Both are good ways to get a conditioned response. First we primary rein forcers, this increases the chance because it satisfies a need for sex, food, and water. Secondary rein forcers increase the probability of a reaction because of value, money, and possessions through learning. Positive reinforcement is a reward that adds stimulus to increase chances of responses.

The other types of conditioning are Operant, also called Instrumental and Skinnerian conditioning. In operant conditioning the punishment, reward, or in other words outcome is important. That adds to the probability that the act will be repeated or not. Operant conditioning is where consequences of a particular behavior are described on the repetition of that same behavior. B.F. Skinner’s experiment of operant conditioning was a cat in a puzzle box. The only way the cat could get out was to pull on a rope; at first the cat did it by mistake. As the experiment went on the cat’s behavior became more and more purposeful. Soon the cat learned that the door opened immediately for his food.

Skinner’s theory of reward was called positive reinforcement, and his theory of punishment was known as negative reinforcement. Reinforcement always increases the strength of the preceding behavior. Skinner was credited with the law of affect meaning an action will be repeated if it is rewarded. Another type of operant conditioning is called, Extinction. Extinction is a particular behavior that is weakened by the consequence of not experiencing a positive condition or stopping a negative condition.

So far this report has broken down stimulus and observable reward and punishment behavior. Overall, some scientists believe the behavior cannot be explained by these theories alone. So next we come to cognitive social theory. Unlike Skinner’s black box theory, German psychologist Wolfgang Kohler wanted to look deeper inside the box. Kohler believed that solving a complex problem was responding to the stimuli in a trial and error statement.

One of his experiments was with using a chimpanzee to try and find his way out of a cage and luring to reach a banana from the ceiling by using it’s insight to grasp the banana. Kohler tried the experiment again with another chimp placing him in the cage with two sticks this time and placing the banana farther then it’s grasp. The chimp lost interest in the banana when it was farther but then realized he could use the two sticks to extend his reach, allowing it (the chimp) to obtain the banana. Kohler called this a, learning insight. To wrap up this report we learned that the different types of conditioning are based on reward and punishment and they all have their own different theories and they are still being tested and experimented today. 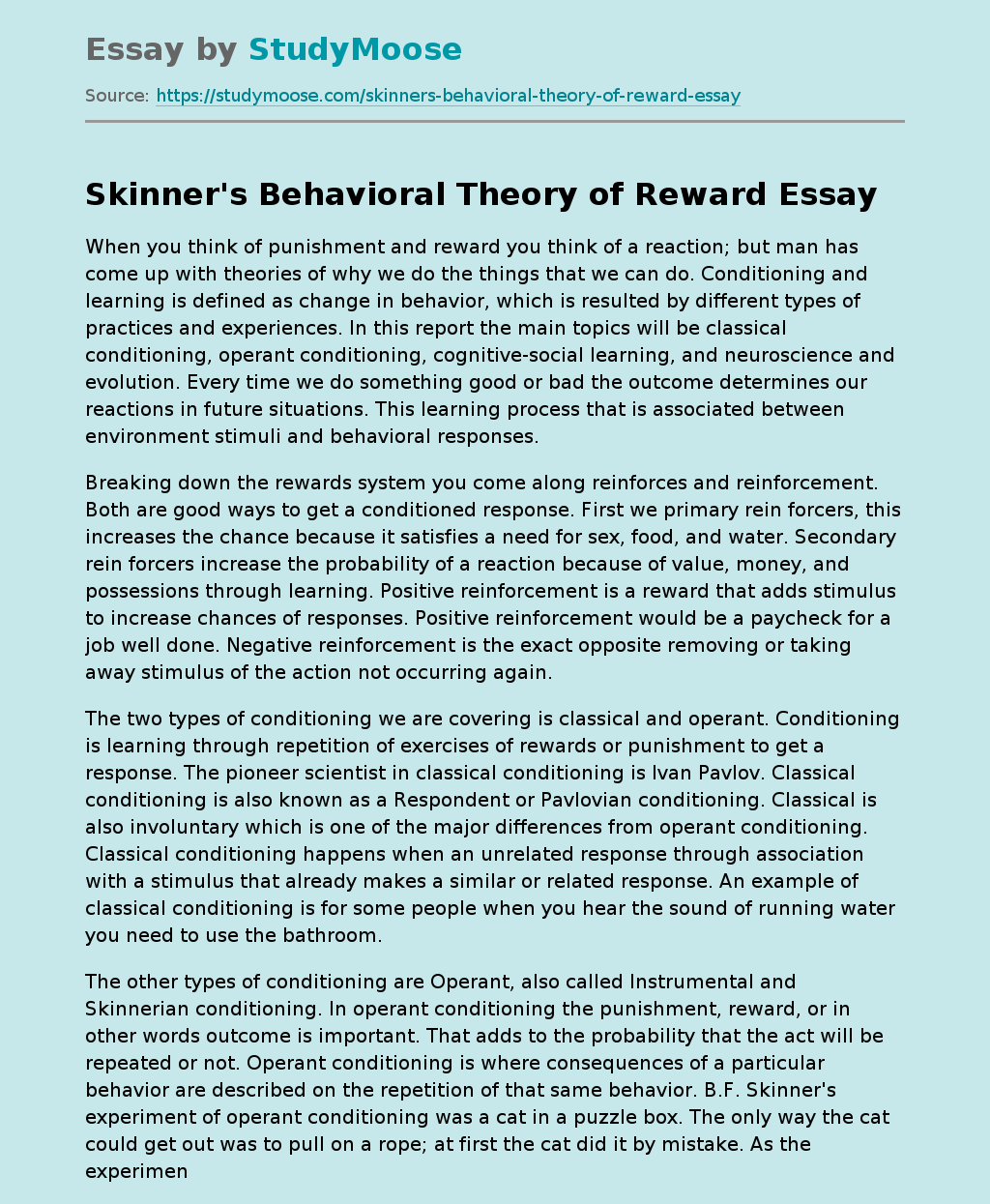