Should Cameron have licensed McTaggart or continued to export? Cameron Auto Parts has many factors to consider when addressing the future of their company. While Cameron has had their eye on expanding internationally, they must also consider how using licensing, as opposed to say FDI, for international expansion will affect Cameron’s control of the business. Cameron is said to have close relationships with whom they do business with, and the lose of control and possible communication issues that come with allowing McTaggart in could harm Cameron’s relations with their clients.

Don't use plagiarized sources. Get your custom essay on
“ Cameron Auto Parts ”
Get custom paper
NEW! smart matching with writer

I believe that Andy has reason for concern with licensing out the work directly to McTaggart “on a silver platter.”

However it can be just as risky to stick to exporting and paying off Cameron’s debts. Cameron seems to not have the specific market knowledge needed to expand internationally, or need to continue to run the risks of currency exchange and other exporting risks such as transportation costs.

Additionally, the high investment required in expanding the exporting business locally could hurt future endeavors to expand internationally. Although Cameron has the capacity to expand their current plant, that is still a limited resource, whereas international expansion would allow for potential beyond their current space.

While they could invest in a new plant or two-shift system, to have licensed with McTaggart is much easier to implement and greatly reduces Cameron’s risks. While exporting would eventually allow for economies of scale (seen in the estimated 20% reduction of production cost annually), expanding internationally with the flexible coupling will allow for an economies of scope with Cameron’s spread out assets.

If profits are expected to increase with the flexible coupling, there is no reason to believe that meeting McTaggart’s demand first and then later investing in a new plant isn’t possible.

Was McTaggart a good choice for licensee?

Yes McTaggart was a good choice as a licensee for many reasons. McTaggart is already deeply entrenched into their markets, and seem to have the kind of market knowledge that Cameron does not have. McTaggart also has the capacities to handle such an arrangement, as well as taking on the brunt of the financing themselves. Most importantly McTaggart was having proven success selling Cameron’s equipment, bringing in $4,000 in the first four months alone while not being able to keep up with demand. Additionally, technology flow-back and McTaggart’s excellent credit record were very appealing to Cameron. McTaggart also has a good reach, having several sales representatives outside of the UK. McTaggart holds a boasting reputation that has seen 130 years of business a high caliber sales force with a proven track record.

McTaggart could pose some problems for Cameron as well. Currently McTaggart’s sales reach is limited, and perhaps Cameron could become more of an international player through other means. McTaggart also may have separate ideas from Cameron on how to generate sales, and their partnership is still a bit infantile.

McTaggart’s most notable advantage though remains their excellent credit. Considering 59% of McTaggart’s total assets are tied into equity, their credit will remain very strong. McTaggart was also able to reach a staggering 1.5 million pound profit despite losing 9 million pounds in total sales, perhaps showing that a licensing opportunity with the flexible coupling can bring a surge into expected sales. McTaggart also seems willing to develop and this could call for future collaborations between the two.

Was the royalty rate reasonable? Did Cameron leave money on the table?

I believe that Cameron could have gotten more out of the deal, but considering the tradition of 1.5% being a normal rate the deal is reasonable for both parties. McTaggart has already been paying an extreme amount of residual costs through importing, and by Cameron sharing their information they are greatly reducing what McTaggart could charge for their product. McTaggart was also able to help capitalize on a product already highly in demand, as well as getting the training and insight from Cameron’s longtime experience in the industry. In return, Cameron is allowed to gain valuable insight on the UK market and is allowed to dip their feet into international operations.

The real concern for Cameron is the relationship the two will have after the five-year contract is up. Once McTaggart has the necessary information and training from Cameron, will McTaggart still be fine with a deal that is traditionally higher than normal? Despite this future concern, Cameron still comes away with a $100,000 knowledge transfer fee and an initial royalty rate that is double the norm for the first million.

In conclusion nothing will be able to beat the profitability of Cameron continuing to export. However, the knowledge and reduction of risk that comes through licensing is what makes a partnership with McTaggart so enticing. Through licensing Cameron will be able pay lower labor, import, and transportation costs as well as gaining invaluable information from a partner that has been a part of an international scene for a long time. Cameron also has plans to go public by 2007, and while allowing for McTaggart to have so much control could hurt the image of Cameron, it also allows for further brand and image recognition for potential stockholders.

I believe Cameron’s plans for expansion are very ambitious and well found, but could perhaps benefit from more time to develop. McTaggart on the other hand is unable to keep up with demand, and with projected sales from flexible couplings only climbing it may be reasonable to hit the market that is proving to be more in need of the product. I believe that in a couple years Cameron will benefit from their market knowledge obtained from McTaggart and will be more ready to decide between expanding their current plant or tackling a bigger international project such as a JV or FDI. 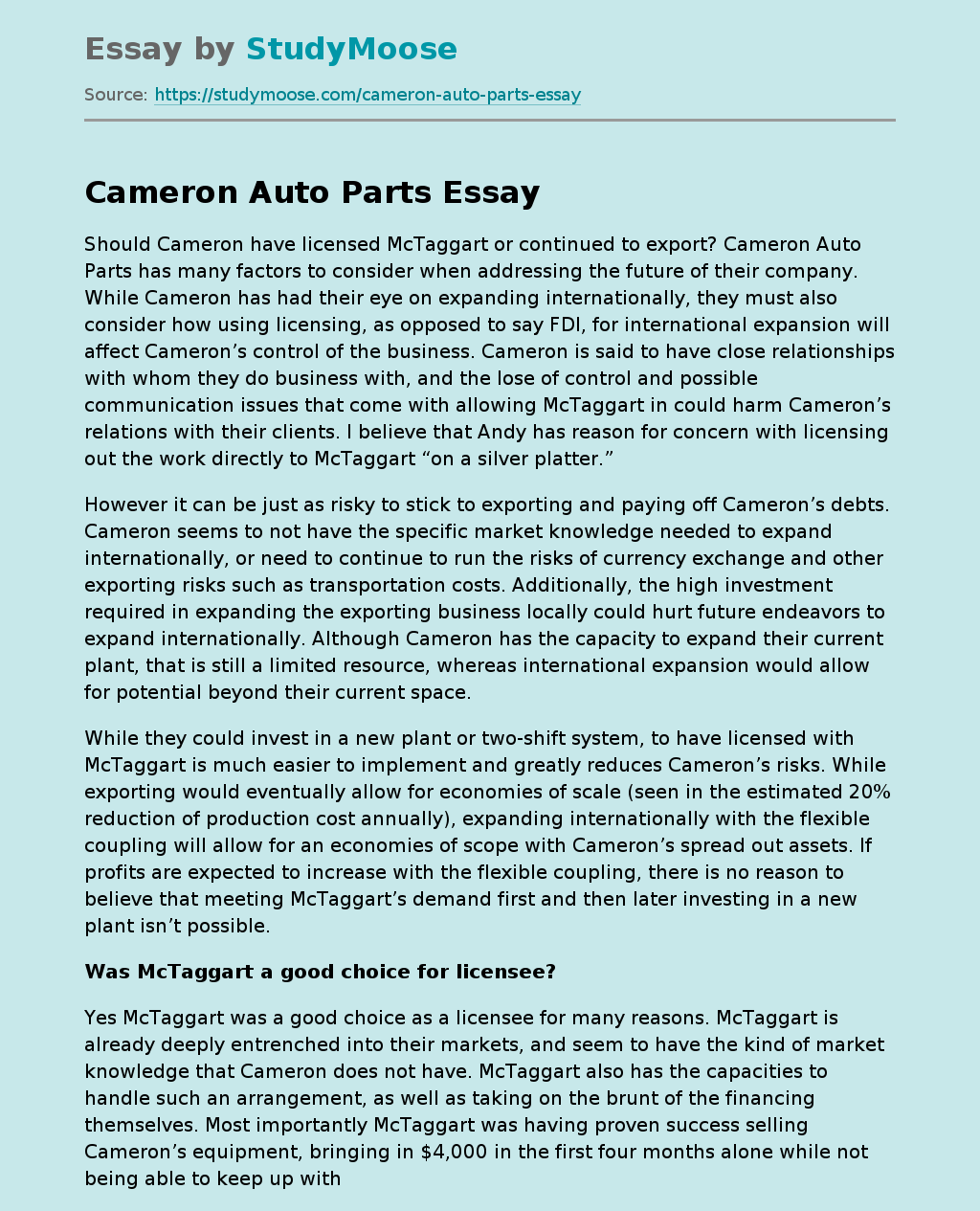