1. Cameron was right to have licensed to McTaggart. Expansion strategies, as discussed in class, have different barriers and costs. For example, for Cameron to have entered a joint venture with the company would have cost both sides a lot of money and time. For Cameron to have expanded into the UK – what Andy had argued – would have been the most expensive and time consuming of the four options. The company definitely has money, however the extra cash needed to finance such large operations isn’t available.

Turn in your highest-quality paper
Get a qualified writer to help you with
“ Case Study Cameron Auto Parts ”
Get high-quality paper
NEW! AI matching with writer

Finally, for Cameron to have simply exported into the UK economy could have been easy however, it is exactly what they are doing now. This leaves them limited to the amount that the importers are able to pay in terms of duty and freight, currency exchange, as Sandy explains, as well as the issue of never knowing “how long the goods will take”(International Management, pg 254) to arrive. Also, with the developing need, having more orders would force Cameron to build a new manufacturing facility to accommodate for the higher production.

This would exuberate their need for that second plant.

All of this leaves licensing to be the most viable option as it requires the least amount of capital, both financial and human. Cameron Auto Parts are paid royalty fees as well as the costs of setting up the manufacturing and training without having to spend much money to get the UK plant running.

2. I would say that McTaggart is a good choice for the company to become the licensee of the UK for Cameron.

According to Exhibit 3, even though they had sales of – £9 million from 1991, it states that this is because their sales took a plummet against “a U.S product of superior quality” (International Management, pg 255) It also states that they have the capacity to increase production substantially. This means that given the right product, they are already capable of producing according to demand. Further, because Sandy himself knows there is a huge (and growing) demand for the part, coupled with the current customers of Cameron, there is almost already a very large customer base and all it needs is a facility that is very seriously interested in becoming “exclusive agents for the UK market” (International Management, pg 256) in order to supply that demand accordingly.

McTaggart also has an excellent credit record, and having been in operation for almost 150 years, it is clear that they are in the business for the long run and would not risk damaging situations and dishonored contracts.

3. The two had come to a compromise of 2% in royalty fees. They came up with the rate of using integrative negotiation techniques. They both knew that they wanted the situation to work, and neither of them came in with an unrealistic starting point or forceful attitude – distributive techniques. Alex began the negotiation at 3% while Sandy pushed a few times for 1.5%. Even though Sandy gave an offer of 2% on the first million €, he still kept close to his initial offer by saying that any profits after the first million would be at a 1.5% royalty rate. Pleasingly, they both agreed to meet in the middle, at 2%.

Without knowing the legal royalty limit in the UK, the textbook (International Management, pg 99) does state that 3% is a stringent limit. This implies that governments consider this rate reasonable and not high enough to hurt the domestic company. That being said, 2% is the right rate. An important piece of information to take note of is the fact that even though their production skills were not as up-to-date as Cameron’s – an issue that would be rectified once the set-up of the facility is completed – McTaggart already has original cost saving ideas implemented in their current plant.

This indicates an ingenuity that perhaps Cameron’s techniques could use. Because Alex specifically states that he would require a flow-back clause in their agreement, this is an added benefit to compromising that 1% since it is only a matter of time before McTaggart’s facility comes up with cost-saving techniques for the flexible couplings. This would more than make up for the compromise. 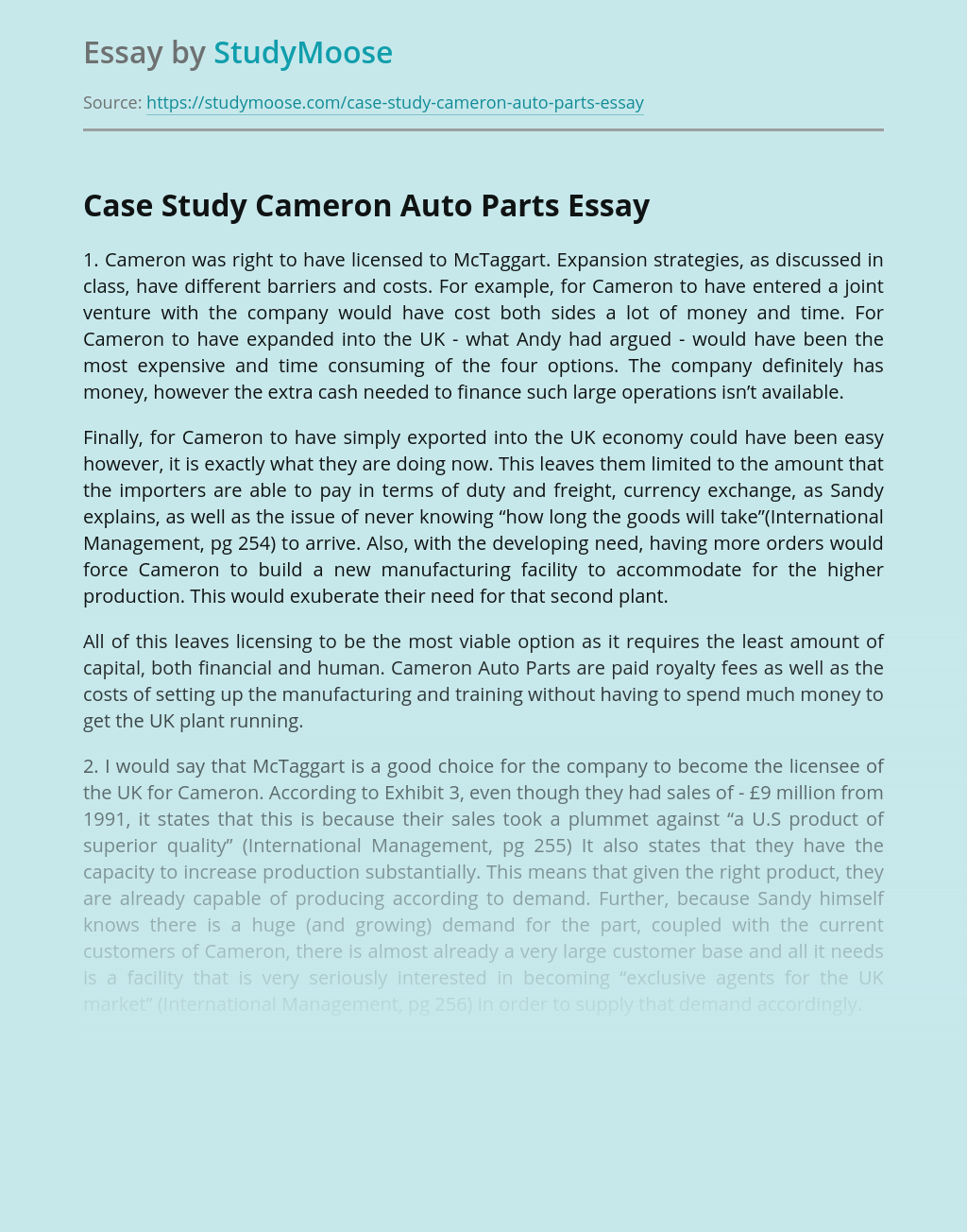 Turn in your highest-quality paper
Get a qualified writer to help you with
“ Case Study Cameron Auto Parts ”
Get high-quality paper
Helping students since 2015
Stay Safe, Stay Original