Bridging the Gap Between the Rich and the Poor

Bridging the Rich and Poor Gap in India

A person with less purchasing power is deeply affected because he cannot afford Goods and services, which the rich can afford and it’s safe to say that, he cannot change his life style and standard of living. Poor and rich gap can be in different forms, some of which are – Education, Income, Life style, Housing requirement and food needs to name of few. Since long, poor people have been ignored by the government but ignoring poor and their demands is not the solution because with poverty not only poor suffers but country suffers as well.

Don't use plagiarized sources. Get your custom essay on
“ Bridging the Gap Between the Rich and the Poor ”
Get custom paper
NEW! smart matching with writer

Poverty is one of the big hurdles in the way of Indian Economy. Though, government has formulated number of concepts as part of the five year plans, corruption always comes in the way of their execution and implementation.

As the poor cannot compete with the rich in pursuing higher education, they have to solely rely on their physical strength for earning their livelihood.

Their earnings are so meager, that they are the true victims of inflation. According to the data of 2004-05 the crude literacy rate of India is 63%. Lack of education and medical awareness make them vulnerable to various health aspects. According to the 2009-2010 data 70% of all the hospitals in India is privately owned.

Corruption as we all know is a chronic disease in India which creeps into the roots of the country to such an extent that no one can even think of getting his or her job getting done without paying bribe.

According to a study carried out by Transparency International in 2005 it had been come into the fact approximately 75% of the population engages in bribing to get their work done in any public office. The key challenge for the government is to provide equal opportunities to everybody, in order to bridge the gap between the rich and poor.

Poverty occurs in both developing countries and developed countries. While poverty is much more widespread in developing countries, both types of countries undertake poverty reduction measures. Poverty alleviation also involves improving the living conditions of people who are already poor. Aid, particularly in medical and scientific areas, is essential in providing
better lives.

Poverty reduction, or poverty alleviation, has been largely as a result of overall economic growth. The dawn of industrial revolution led to high economic growth, eliminating mass poverty in what is now considered the developed world. In 1820, 75% of humanity lived on less than Rs 50 a day, while in 2001, only about 20% do.

Start a website where anyone can complaint about any official or any irregularity while remaining anonymous. Senior officials of the places should circulate their contact numbers among the people where anyone can call and can complaint. Senior official should time to time conduct a round to check whether everything is working satisfactorily. Strict actions should be taken against corrupt officials.

Bridging the Gap Between the Rich and the Poor. (2016, Apr 14). Retrieved from https://studymoose.com/bridging-the-gap-between-the-rich-and-the-poor-essay 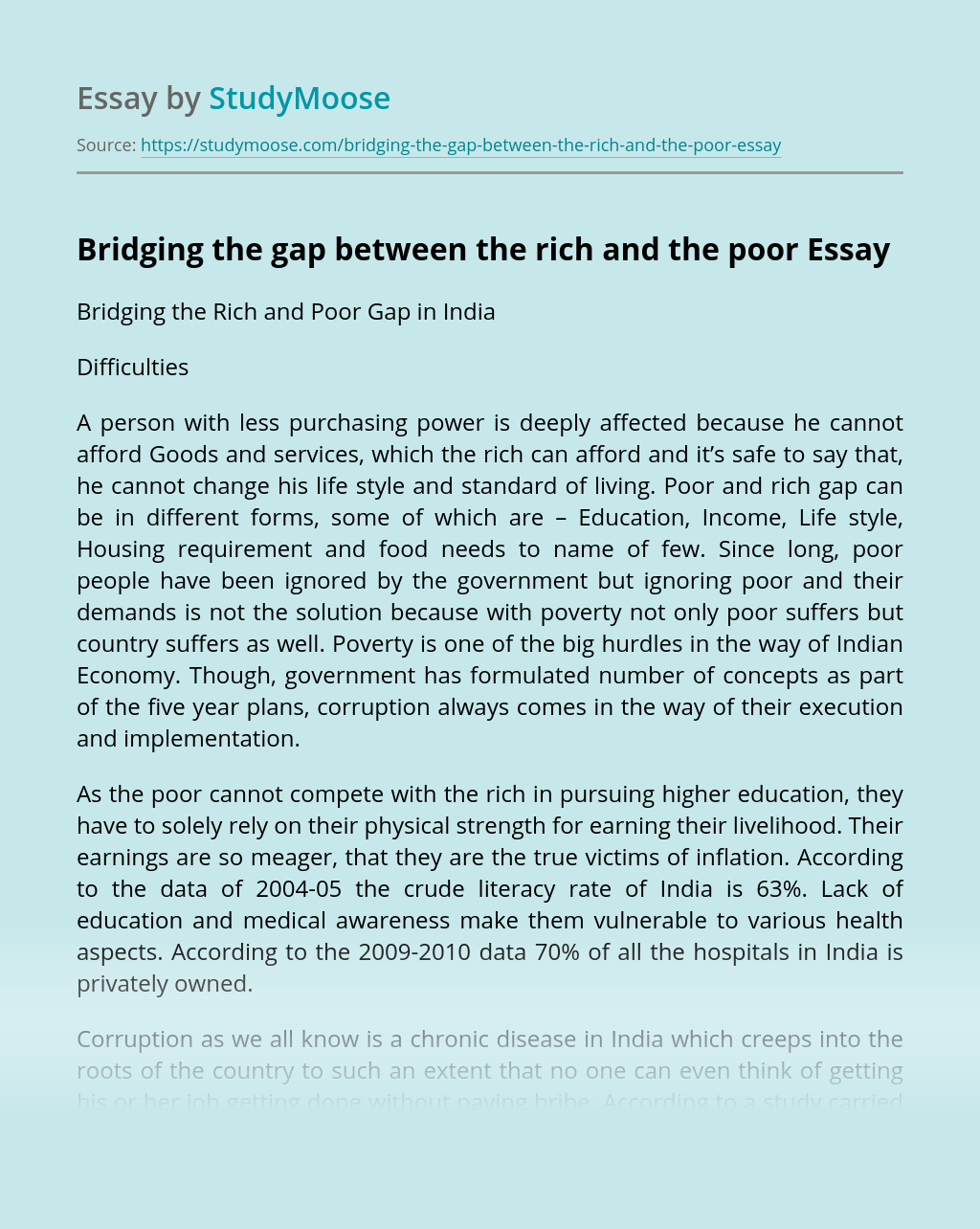