Bowen Family Systems, Structural, and Strategic Models Theory Application The case study of Ana will be analyzed using the Bowen Family Systems Theory Approach. Bowen Family Systems Theory is a theory of human behavior that views the family as an emotional unit and uses systems thinking to describe the complex interactions in the unit (Kerr, 2000). This paper will discuss the concepts of the theory that is appropriate for this case study; the reason this theory was chosen over the other ones; counseling goals and intervention strategies in accomplishing those goals; and designation of short or long term counseling.

This paper will also discuss the counselor’s role with Ana; the client’s role in counseling; the population this theory is most appropriate for as well as addressing the social and cultural needs of the client; any additional information that might be helpful to know about this case; and what are the risks, if any, of using this approach. What concepts of the theory make it the most appropriate for the client in the case study? Include at least five concepts.

There are five concepts that would make this theory appropriate for the client in the case study. The first concept in this Bowen Family Systems Theory Approach is triangles. What is a triangle? According to Kerr (2000), a triangle is a three-person relationship system. This triangle is a part of a bigger emotional system because a triangle is the smallest stable relationship system. These triangles involve, according to Murdock (2013), two people that are the “in” group and one person that is the “outside” group.

Triangles form when the anxiety levels rise in a relationship or family (Titelman, 2008). Individuals (or families) with low levels of differentiation are more likely to triangle because more emotion is involved (Kerr, 1981). As a counselor, it is best to pay attention to your client and if they seem to react repeatedly to others, then you can suspect that a triangle has been activated (Murdock, 2013).

As for Ana, there is a triangle that has formed here. She is worried about surviving without her husband being around and figuring out how to make things meet because she is unemployed. The second concept of this theory is differentiation of self. According to Murdock (2013), differentiation deals with the individual as well as the family; however, according to Kerr (2000), the differences between an individual and family reflect the different levels of differentiation to self. A person who has low levels of differentiation are said to react and adjust their way of thinking to better suit the situation that they are in (Kerr, 2000). A person who has a high level of differentiation can keep their cool when conflicts arise (Kerr, 2000). Bowen (1978), refers a low-differentiated individual’s tendency to fuse as a “common self with others” and is most clearly seen in intimate relationships such as marriages.

Titelman (2008), spoke of a pattern called underfunctioning-overfunctioning dynamic where the weaker individual in the family system is the weaker of the two and is more likely to develop symptoms. Ana is the weaker individual in the family since she does not have a job and she feels worried about how to continue with her life. She is hopeless and does not know what to do (Grand Canyon University, 2014). The third concept in this theory is the Nuclear Family Emotional Process. According to Kerr (2000), this concept describes four basic relationship patterns that govern where problems develop in a family. The four problems are marital conflict; dysfunction in one spouse; impairment of one or more children; and emotional distance. In a marital conflict, according to Kerr (2000), as family tension increases and the spouses get more anxious, each spouse ends up focusing on the negative issues about each other.

In a dysfunction in one spouse problem, according to Kerr (2000), one spouse pressures the other spouse to think and act one way and then the other spouse yields to that pressure. If anxiety levels rise in these problems, psychiatric, medical, or social dysfunction may develop (Kerr, 2000). In impairment of one or more children problems, according to Kerr (2000), the spouses focus their anxieties on one or more of their children and the children focus their anxiety on them which can ultimately impair school performance, social relationships, and even health (Kerr, 2000). In emotional distance problems, according to Kerr (2000), people distances themselves from others to reduce the intensity of the relationship, but risk isolation from each other. The fourth concept of this theory is the family projection process. This concept describes the primary way parents transmit their emotional problems to a child (Kerr, 2000).

This process can impair the functioning of one or more children and can increase their clinical symptoms. Some problems that children inherit from their parents include the need for attention and approval; difficulty dealing with expectations; the tendency to blame oneself or others; feeling responsible for the happiness of others or that others are responsible for one’s own happiness; and acting impulsively to relieve the anxiety of the moment rather than tolerating anxiety and acting thoughtfully (Kerr, 2000). Parents have different roles in this process: mothers are the primary caretakers and experience more emotional involvement with one or more child and fathers experience the outside of the triangle, except in high level of tensions among the mother and child (children) (Kerr, 2000).

Even though Ana’s son is only one years old, problems may arise in him later on in life because of the problems going on at home right now and with the father being deployed. The fifth concept of this theory is multigenerational transmission process. This process describes how small differences in the levels of differentiation between parents and their offspring lead over many generations to marked differences in differentiation among the members of a multigenerational family (Kerr, 2000). Why did you choose this theory over the others?

Theory was chosen for the evaluation of Ana’s case study because this theory focuses on the family not just the individual alone. Even though Ana went in for a counseling session alone, there are underlying issues that most likely involve her family as well. What will be the goals of counseling and what intervention strategies are used to accomplish those goals?

The goal of the Bowen Family Systems Theory (BFST) is to help an individual or individuals separate from the family (Titelman, 2008). According to Murdock (2013), an individual must remember that this separation does not mean that he or she needs to cut their family from their life. This theory should help an individual alter the way they reactive in relationships and change the way they handle stress (Murdock, 2013).

There is an intervention strategy that can help accomplish the goal of the BFST. This strategy is process questioning. According to Murdock (2013), the questions that are asked help an individual avoid the emotion that is associated with content questions. Is the theory designed for short- or long-term counseling?

The BFST is designed for long-term counseling. Treatment of an individual can potentially take years to complete, however, it does depend on the individual and well they advance and overcome their treatment goals (Withers, 2012). What will be the counselor’s role with this client?

A BFST counselor remains detriangled in this type of counseling session by presenting themselves as objectively and unemotionally (Kerr, 1981; Murdock, 2013). The counselor is there to teach the client about the operation of family systems (Murdock, 2013). In order to effectively treat an individual, according to Murdock (2013), a counselor should undergo their own BFST therapy himself. What is the client’s role in counseling?

In a BFST counseling session, a client is assigned the task of journeying home to observe family interactions; put the principles that were learned into effect; and change how he or she interacts with the family (Murdock, 2013). For what population(s) is this theory most appropriate? How does this theory address the social and cultural needs of the client?

BFST is contrary to the norms of many cultures because they tend to support separation of individuals and families (Murdock, 2013). BFST approaches cannot really treat close-knit Latino families or African-American families because of their close family relationships with one another (Sue & Sue, 2008; Falicov & Brudner-White, 1983). What additional information might be helpful to know about this case?

Some additional information that might be helpful to know about this case is how Ana feels about bringing her family in to counseling sessions to see if there are any underlying issues that need to be resolved. What may be a risk in using this approach?

After researching this theory, “some aspects of this theory seem to be operationalizable and testable” (Murdock, 2013, p. 451). Even empirical tests of the BFST have produced promising results in areas such as relationships among differentiation; anxiety; relationship satisfaction; and psychological dysfunction (Murdock, 2013; Miller, Anderson, & Keala, 2004). Bowen’s prediction of individuals choosing partners with similar levels of differentiation received mixed results in the literature, with studies confirming and others disconfirming (Murdock, 2013; Day, St, Clair, & Marshall, 1997; Greene & Mabee, 1992; Kosek). However, when BFST is dealt with family or couples processes, research is less supportive.

The Bowen Family Systems Theory was the theory chosen for this paper to analyze the case study of Ana. This paper discussed the concepts of the theory that is appropriate for this case study; the reason this theory was chosen over the other ones; counseling goals and intervention strategies in accomplishing those goals; and designation of short or long term counseling. This paper also discussed the counselor’s role with Ana; the client’s role in counseling; the population this theory is most appropriate for as well as addressing the social and cultural needs of the client; any additional information that might be helpful to know about this case; and what are the risks, 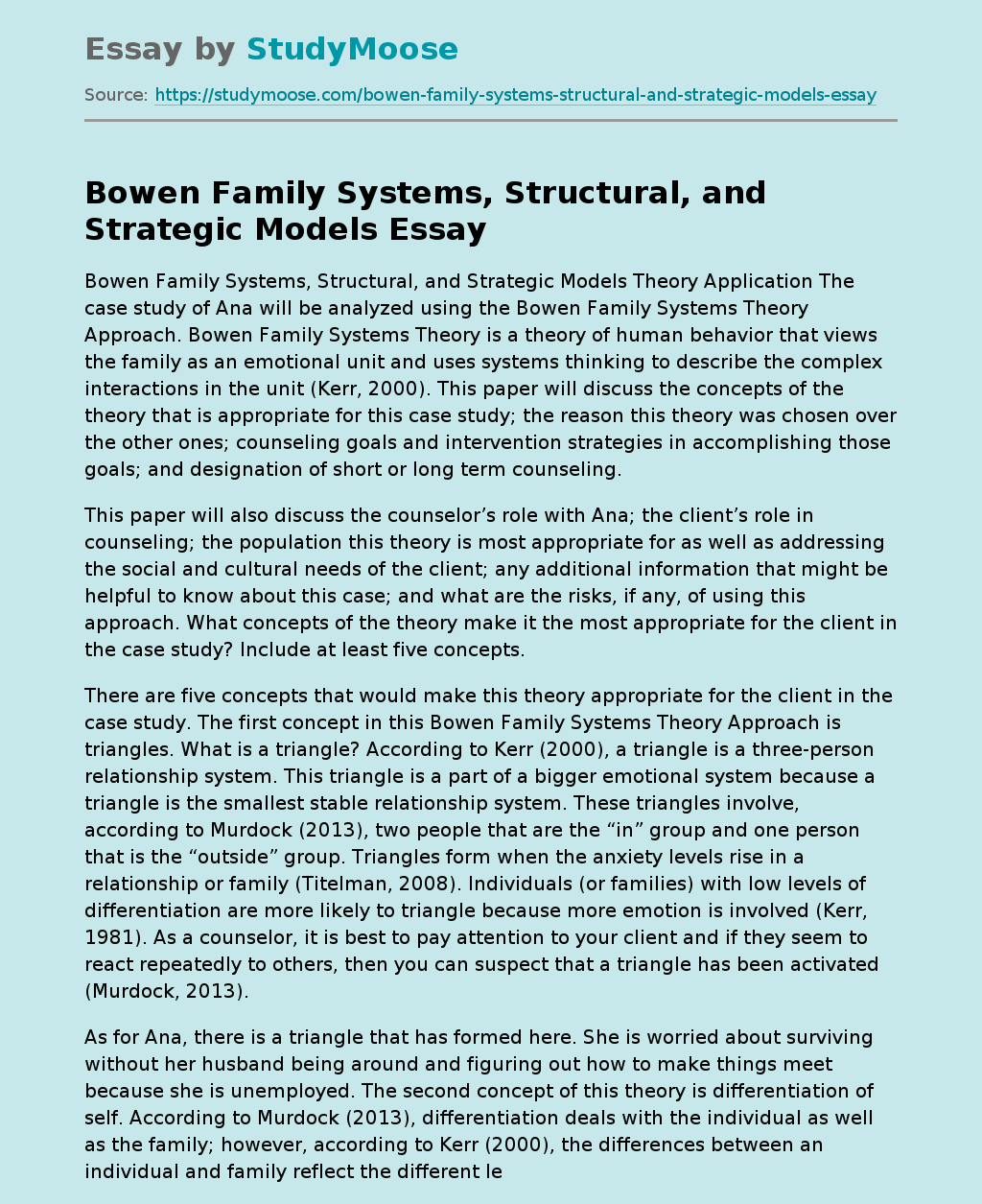