Books for Children and Kids

Don't use plagiarized sources. Get your custom essay on
“ Books for Children and Kids ”
Get custom paper
NEW! smart matching with writer

In western Europe, there was no separate category of books for children before the eighteenth century. The Bible, stories of saints and martyrs, and bestiaries or books about exotic animals, were probably the first printed books available to children. Childhood, as we think about it today, is a relatively new concept. Until the 17thcentury, children were thought of as small versions of adults and treated accordingly. In most societies, children were a source of labor.

There were some books (mostly for the children of wealthy families) even before the invention of movable type by Gutenberg in 1455, but they were instructional in nature and were used to instill lessons of morality, manners, and religion.. With the rise of Puritanism in England early in the seventeenth century, literature for children became moralistic. Seeing children as amoral savages needing to be taught right, society used stories filled with death and damnation to frighten children into good behavior. Humor and imagination were banned.

The Sunday School Movement of the late eighteenth and early nineteenth centuries, which aimed at bringing religion to the working class, continued the didactic tone in the thousands of cheap tracts of simple stories distributed throughout England and the United States.

Over the next centuries, there was a gradual shift in attitude toward children which was reflected in the reading material produced for them. Hornbooks and chapbooks appeared, still designed to instruct, but some included woodcut illustrations in addition to ABCs and religious lessons.

The most famous and prolific publisher for children of the 18th century was John Newbery. He published books which were immediately attractive to children: in a small format, with illustrations, and bound in brightly-coloured flowered paper. In the 18th and early 19th centuries, Robin Hood, Mother Goose tales, Robinson Crusoe, and Gulliver’s Travels were published and were the most attractive to the world of a child’s imagination. ” A Visit from St. Nicholas” by Clement C. Moore was published in 1823 and was one of the first works to introduce humor and laughter into the world of children’s literature.

The Victorian era was a golden age for childrens’ books. Victorian family life is realistically depicted in Louisa May Alcott’s Little Women (1868), whereas Mark Twain’s Adventures of Tom Sawyer (1876) and Robert Louis Stevenson’s Treasure Island (1880) emphasize adventure; all three books present fully developed characters. At the turn of the century several children’s magazines were being published, the most important being the St. Nicholas Magazine (1887–1943). It was also the time of classic books , such as Alice in Wonderland, and great illustrators– Kate Greenaway, Edward Lear, and Howard Pyle to mention a few.

In the middle of the 19th century, there were major changes in illustrations of books. Until then, wood engraving was the norm; with the development of chromolithography, which permitted printing in many colors, the world of book illustration changed dramatically. Great writers teamed with great illustrators to produce the books. The industrial revolution led to advances in printing which made books colorful, affordable, and plentiful. The growing middle class, with its increased interest in education, expanded the audience for children’s books.

Walter Crane, whose work is highlighted in this exhibit, was a British artist and one of the first people to use the new printing techniques to bring color and design techniques into the world of children’s literature. The twentieth century continued a publishing industry for young people with adventure stories, series books like the Hardy Boys and Nancy Drew, science fiction and fantasy. During the 20th cent. in particular, new collections of tales that reach back to the oral roots of literature have come from Europe, Asia, Africa, and the Caribbean.

Recent years have brought books of children related to movies and commercial products from Disney to Star Wars as well as the psychologically-oriented young adult novel. The great scientific and societal changes of the early twentieth century had a great influence on the adventure story. The exploits of the World War I fliers replaced the cowboy and big game hunter in the dreams of young boys. Many of these adventure stories were published in long series, written by different writers all using the same name.

Books for Children and Kids. (2016, Sep 05). Retrieved from http://studymoose.com/books-for-children-and-kids-essay 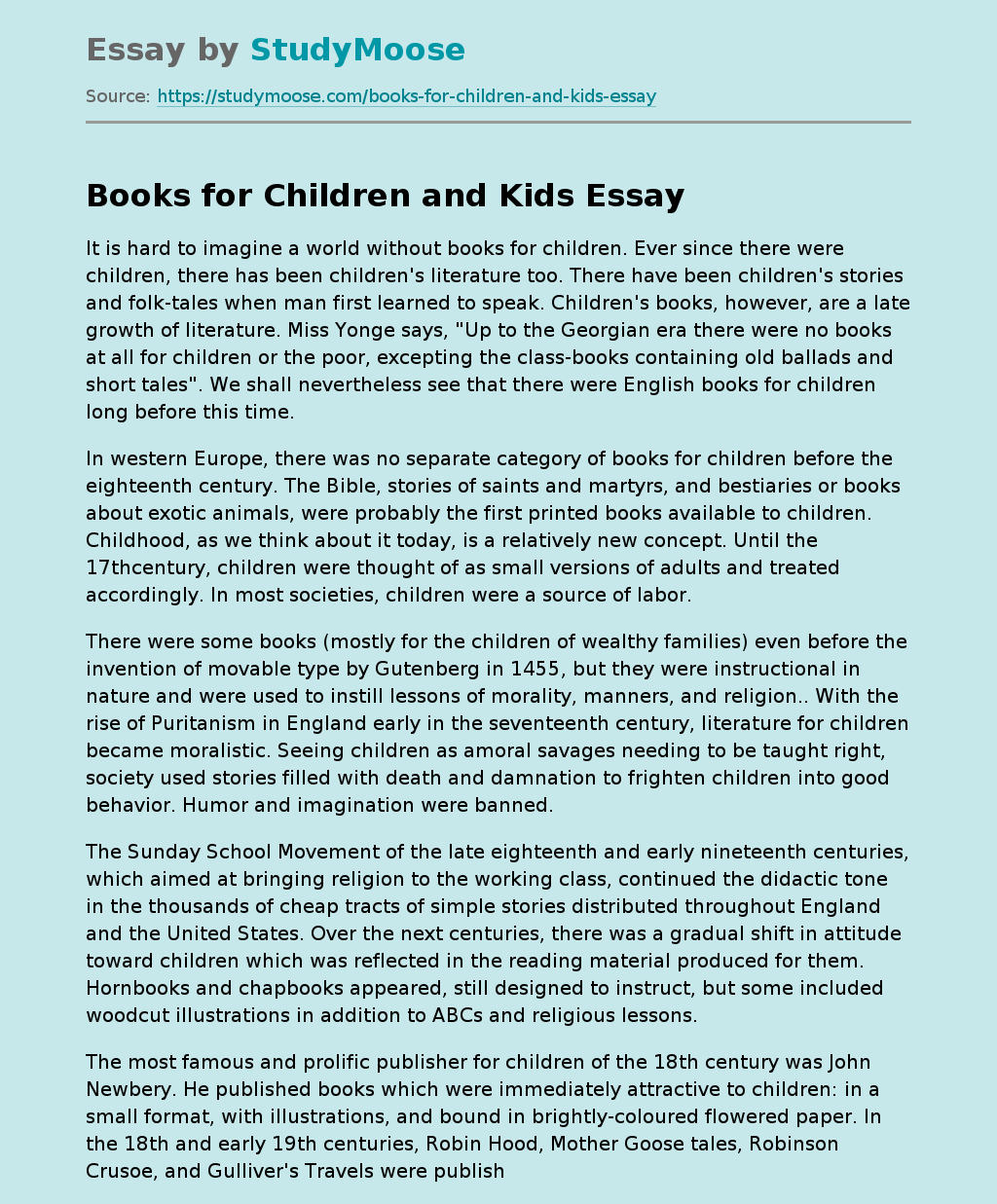