Body Ritual among the Nacirema Essay

Horace Miner wants his readers to learn the value of what a real culture should be and how Americans today are really like. In his article, Body Ritual among the Nacirema, Miner writes about a cultural tribe that has strange rituals and values that would seem unethical to anybody else. He describes how important culture is to them and portrays that Americans think their culture is so important yet their beliefs are not where they should be. The cultural relativism he describes is that we rely on our looks to be able to live our everyday lives as humans and think that that is the only thing important in this world.

Don't use plagiarized sources.
Get Your Custom Essay on Body Ritual among the Nacirema Just from $13,9/Page

I found from this article that Miner was hoping to have us see that Americans have many cultural beliefs or practices that really are ridiculous when viewed from somebody else. Horace Miner presents in his article, Body Ritual among the Nacirema, that society is so stuck in their ways of living and forget about the way they used to live without the ‘materialistic’ ways of life.

He is trying to portray that society has changed so much over the years and has made such a negative effect on this world, and that we need to learn what really matters and what a positive culture is.

“A nation’s culture resides in the hearts and in the soul of its people.” (Gandhi, M. (n.d.)). People in our world come from all different cultures that we may not always be familiar with. Our experiences and perceptions represent the values and decisions that are made in our life. It is important to get to know the different types of cultures that surround us and how others live their lives. The article, Body Ritual among the Nacirema, relates to many core aspects of sociology, including culture, cultural relativism, ethnocentrism, and conflict theory

Our culture is the foundation of who we essentially are in life. It identifies the lifestyle and pursuits that are practiced in the group of people we interact with in our society. Our cultural beliefs, values, and practices are learned from birth, from the moment they were born, onto where they congregate with their surrounding people. The fact that you share a similar culture with others helps to define the group or society to which you belong. (Schaefer, R. T. (n.d.)). Furthermore, our own culture is diverse and it is significant to look within and identify what we value the most, what is essentially needed, and how we perceive the world.

The article, Body Ritual among the Nacirema, was found to be very interesting to read. It is quite amazing the learn about the different cultures that we have in this world that we never even knew about but is happening from day to day in this life. Horace Miner writes about the characterization of the North American group called The Nacirema. The Nacirema people are described as a culture obsessed with rituals with regards to the vanity of the human body as a whole. The Nacirema present such unusual aspects that it seems desirable to describe them as an example of the extremes to which human behavior can go. (Miner, H. (n.d.)).

Culture is the totality of learned, socially transmitted customs, knowledge, material objects, and behavior. (Schaefer, R. T. (n.d.)). In Horace Miner’s essay, Body Ritual among the Nacirema, the author describes in intricate detail the seemingly bizarre cultural practices of a society known as Nacirema. He wanted his readers to see how crazy different cultures, as well as your own, can be. Miner describes what this culture believes in and what their daily rituals are. The readers may think it is highly inappropriate and a weird way of living but that you should not judge, because that is what they believe in to be their culture.

Horace Miner describes the Nacirema’s oral hygiene by, “The Nacirema have an almost pathological horror of and fascination with the mouth, the condition of which is believed to have a supernatural influence on all social relationships. Were it not for the rituals of the mouth, they believe that their teeth would fall out, their gums bleed, their jaws shrink, their friends desert them, and their lovers reject them.”

He is describing cultural relativism, meaning that Americans rely solely on their appearance to live their day to day lives and think that if they are more appealing to the eye they will have more friends. Cultural relativism stresses that different social contexts give rise to different norms and values. (Schaefer, R. T. (n.d.)). People need to learn to be more understanding of others and to not judge what they believe in whether you disagree with it or not.

Horace Miner’s piece, Body Ritual among the Nacirema, is an entertaining social commentary about ethnocentrism. He is describing American cultural practices pertaining to cosmetics and hygiene, correlating to an ancient tribal society. Miner was trying to have his readers think outside the box with this one, and use our cultural prejudices against our own society morals. From this article, I believe that Miner was hoping to have us see that Americans have many cultural beliefs or practices that really are ridiculous when viewed from somebody else. From learning so, we need to be more open to learning new things and being more understanding of other people and their beliefs.

Functionalist theory minimizes the importance of change. It emphasized the persistence of social life and sees change as a means of maintaining society’s equilibrium (or balance). (Schaefer, R. T. (n.d.). The conflict theory is meant by social institutions and practices continuing because less people are likely to change. Horace Miner in his writing of the article, Body Ritual Among the Nacirema present a situation where the society in the world has abandoned their natural tendencies to adopt modernity Miner is stating in his article that people are stuck in their same ways of living and are too blind to see that it is not always the best way to view things, especially in a positive way.

In the article, Body Ritual among the Nacirema, Horace Miner relates his piece to culture, cultural relativism, ethnocentrism, and conflict theory. Culture is defined as the arts and other manifestations of human intellectual achievement regarded collectively. He wants to display the way Americans are really living their lives from a different perspective. The way Americans live their lives, so far, does not seem like it is going to change because we are all stuck in our same ways of living because that is what we believe to be normal. In the end, Horace Miner is trying to tell us that the way we live our lives is morally ridiculous and should not be how we define ourselves.

Body Ritual among the Nacirema. (2016, May 03). Retrieved from https://studymoose.com/body-ritual-among-the-nacirema-4-essay 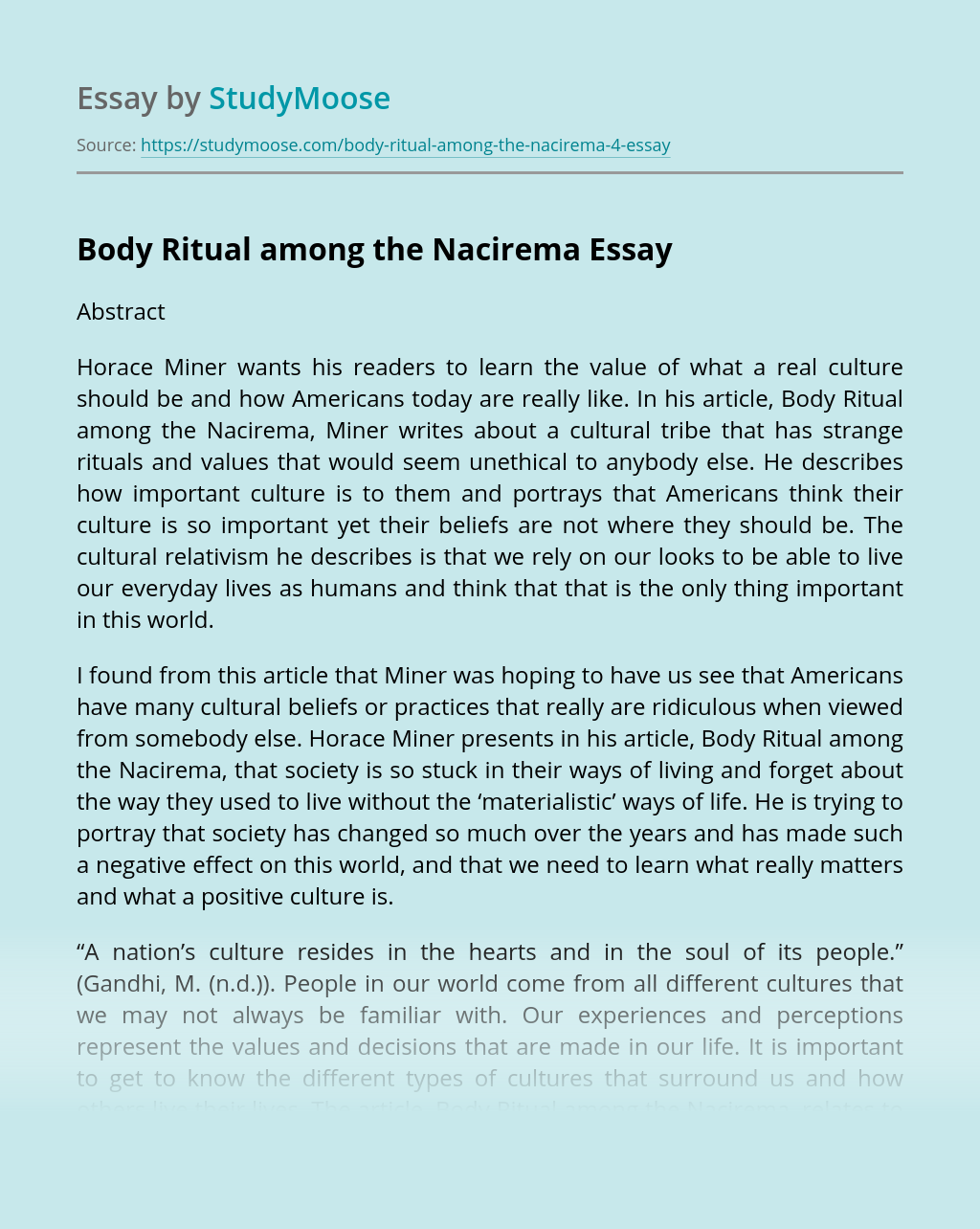 Lies, Damned Lies, and Science Book Report Heading: Finding out the importance of stakeholders and their position Location: Chapter 2 (Whos who?: identify those who hold stake in an issue and what their positions are) Summary: The key points in Seethalers arguments on stakeholders and their roles is the importance of the people involved in... VIEW ESSAY

View sample
The Purpose and Process of Capital Budgeting

Capital budgeting is the process of evaluating and selecting long-term investments that are in line with the goal of investors’ wealth maximization. When a business makes a capital investment (assets such as equipment, building, land etc.) it incurs a cash outlay in the expectation of future benefits. The expected benefits generally extend beyond one year... VIEW ESSAY

View sample
Get Essay
Skinner and his Contributions to Psychology

Burrhus Fredric Skinner is an American psychologist and behaviorist. He has made many contributions to psychology and most are still used today. They are used to treat some phobias and addictive behaviors in humans. He also thought of radical behaviorism which is his own philosophy of science. Skinner believes that the best way to understand... VIEW ESSAY

“Shooting Stars,” by Carol Ann Duffy is a poem that explores the theme of tragedy through the writer’s creation of haunting imagery and tells a story, like no other. Using techniques such as imagery, enjambment, structure and form, Duffy invites the reader to contemplate the Jewish victims of the Holocaust in World War II and... VIEW ESSAY