Since before the time America became a nation and developed its own standards of living, racism has consumed the social environment and only gets worse as time progresses. Throughout the years, African Americans have been lynched and unfairly forced to work as slaves for white men on plantations. However, progress has been slowly made over the years. By 1870, the Reconstruction amendments were added to the Constitution. These amendments were crucial to the beginning of the end to the racial injustices Black Americans have faced.

Don't use plagiarized sources. Get your custom essay on
“ Black Lives Matter and Police Brutality in America ”
Get custom paper
NEW! smart matching with writer

These three amendments abolished slavery, granted African Americans citizenship, and gave them the right to vote regardless of their previous forced servitude (Senate Historical Office). Despite the passage of these amendments, blacks were still excluded from their right to vote and the “Jim Crow” laws and “Black Codes” were enacted. These laws restricted black activity and brought another form of slavery known as indentured servitude which differed from the initial slavery they faced in that the workers were given a small pay for their work.

In response, African Americans created the Freedmen’s Bureau which made sure they received fair pay for their labor.

When the 1960’s came around, African Americans were still treated unfairly and began their Civil Rights Movement. African Americans had been forced to attend segregated public spaces designated specifically for the “colored”. Schools, bathrooms, and even public transportation were deemed to be constitutionally segregated as long as they were “separate but equal” and required African Americans to separate from their white counterparts. Since 1958, the “separate but equal” doctrine began to be questioned and was struck down by the United States Supreme Court.

Due to key leaders like Martin Luther King Jr. and Rosa Parks, the Civil Rights Movement officially began with the Montgomery bus boycott. Despite the unjust violence they received throughout the past and during that time period, the Civil Rights Movement was based on peaceful protests and avoiding conflict between the races. Racial tension has decreased since the Civil Rights Amendments and other Supreme Court decisions were made since the 1960’s. However, at this point in time racial tension has reached an all-time high. Since President Barack Obama was elected in 2008, public polling shows that people are under the impression that race relations have gotten worse under his presidency (Ross 2015). Since the riots in the 1960’s, the spark that has always ignited racial tension are conflicts with law enforcement officials. Today, that is exactly the problem that society is facing with this ongoing race war. African Americans and police officers are continuously targeting each other and killing each other simply to demonstrate superiority and what they perceive is just.

After the acquittal of George Zimmerman in 2013 for shooting and killing a seventeen-year-old African American, Trayvon Martin, the hashtag “#BlackLivesMatter” spread across America. The hashtag was created by Alicia Garza with two of her sisters, Patrisse Cullors and Opal Tometi. This movement serves to call attention to the belief that black lives are targeted for termination. As more African Americans became aware of the movement, the hashtag was taken to the streets through a “Black Lives Matter Ride” and led to more recognition by mainstream media, large corporations, and even campaigns. As more African Americans and more law enforcement officials are being killed, the “#BlackLivesMatter” hashtag continues to reappear all over the news and social media. Whenever an African American is murdered by someone of another race, the “#BlackLivesMatter” movement comes into action to call out the injustice on social media and on the news.

According to recent studies, since 2015 police have killed almost two African Americans each week, resulting in one hundred and two unarmed deaths. However, at least three times as more whites have died due to law enforcement in the last two years (Richardson 2015). The only difference is that minority deaths are more focused on by the media. The media is simply fueling the “#BlackLivesMatter” movement by doing this and creating more violence between the police and African Americans. When a white person or Hispanic person are killed by police there is no news report or any public record, however when an African American is killed there is a news update on the situation every time the news comes on. This violent tension is not a new concept. The only difference between the brutality now and the brutality that was faced before is the use of digital cameras to capture the violence in real time. Once violence is recorded, the video is uploaded online through their memorable hashtag “#BlackLivesMatter”.

People ranging from Gilbert Collar, a white man, to Eric Garner, an African American, were wrongfully killed by the police however, these officials have not been indicted, just put on suspension. Just last week an African American man named Philando Castile was shot unreasonably by a police officer who stopped him for a broken headlight the day after another African American man named Alton Sterling was shot and killed by police. This fueled the “#BlackLivesMatter” movement even more when the two tragedies led to the fatal shootings of five officers in Dallas and major protests of about two hundred people on Interstate 94 (Helsel, Fieldstadt, Grimson, The Associated Press 2016).

Although this is an issue that will never be resolved or be put to an end, there are ways that this brutality and violence can be made less prevalent. The most common form of reconcile the United States has given people who they have done wrong is by cash reparations. These reparations were given to the Native Americans for forcing them out of their land in the nineteenth century and to the Japanese Americans after they were put in internment camps during World War 2. However, this issue has escalated to an extreme that it does not require any form of reconcilement at this extent. If monetary reparations are given to the African Americans whom have lost a family member in this race war, then the families of the police officers who have been killed must also be given reparations for their loss. This may lead to even greater extent of violence as those in the “#BlackLivesMatter” movement may escalate their brutal actions, in turn, forcing police officials to escalate their power and authority, only leading to more deaths and protests. The key to at least reducing the violence and killings of both groups is to hire officials who are at a more mature age who aren’t going to shoot first and ask questions later. The officials who have been hired lately are all young men and women who are in their twenties and thirties. If the department were to hire more mature, older people then the killing of innocent men and women would be put to an end. As for the African Americans, they must stop murdering innocent officers who have no relation to any killings or wrongdoings toward those of their race. Last week, the five officers killed had no affiliation to the crimes committed against African Americans yet, they were still targeted and killed. Innocent police officials simply doing their jobs are being killed daily while trying to protect public safety. The reason that older men and women aren’t applying to be a law enforcement official is because they know that they would be putting themselves in danger due to the African American’s movement. It would be ludicrous to apply for a job that entails risking your life knowing that the societal situation has come to an extreme racial war between African Americans and law enforcement officials.

Researchers at the Pew Research Center have found that racial disparities caused by African Americans are due to gaps in education, wealth, and broken family structure (Ross 2015). About seventy-two percent of African Americans are raised in broken homes with missing parental figures and feel they have no one to look up to. In turn, African American children turn to the streets for validation. In order to get African Americans to feel safer and more validated, the achievement gap must close. This means that the gap in education and employment must be closed in order to promote less violence (National Education Institute). Teachers must begin to set attainable goals for these students to prosper and break the cycle of brutality. The cycle of hatred that they are born into must be diminished as well. Slavery ended over one hundred and sixty years ago and African Americans are continuously bringing up the issue that they were once enslaved. However, they themselves were never part of the slave system because this was over a century ago. Jewish people were terrorized for years by being placed in concentration camps where they were forced to be slaves and died slow and painful deaths. They were made to be objects when they had numbers painfully tattooed to their arms and stripped of their dignity. Though they were starved, beaten, and chained, they have broken their cycle of hatred. If this cycle is not broken, then African Americans will never prosper in their socioeconomic groups because they will still be dwelling in the past. Without excelling in their groups the violence and brutally will never be diminished or put to an end. 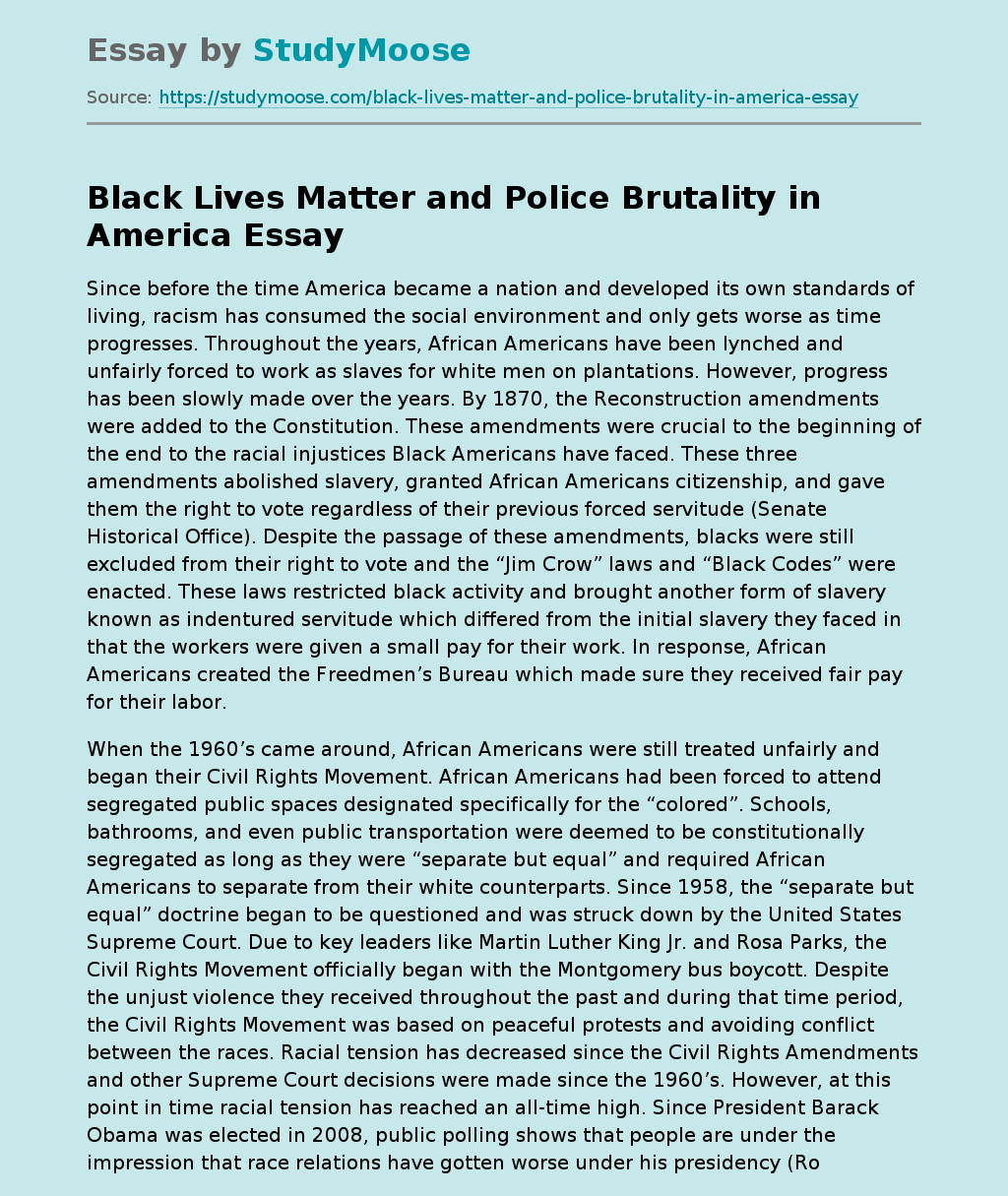