Analysis of Randall Jarrell's "The Death of the Ball Turret Gunner"

In today’s society, war is often perceived as glorious and mighty. Many movies leave out scenes of young soldiers throwing their lives away and thousands of people dying systematically in unheroic deaths. The poems, “The Death of the Ball Turret Gunner” and “Dulce et Decorum est” attempt to touch on the issues of war. In these poems, the narrators uses imagery, diction and sorrow to show the brutality and sorrow of war.

“The Death of the Ball Turret Gunner,” by Randall Jarrell speaks of both the futility of life and the callousness of war.

Don't use plagiarized sources. Get your custom essay on
“ Analysis of Randall Jarrell’s “The Death of the Ball Turret Gunner” ”
Get custom paper
NEW! smart matching with writer

The ball turret gunner had perhaps the most dangerous job of the crew. Once inside the ball turret, the gunner had little room to move and was very cramped. In this cramped space, the gunner faced extremely cold temperatures and had to squeeze into a fetal position: “From my mother’s sleep I feel into the State, / And I hunched in its belly till my wet fur froze” (1-2).

These lines can be attributed to futility of life in that, in most cases, and especially in this poem, when the ball turret and gunner leaves the “womb” of the Air Force plane, by dropping out of the fuselage, he faces death. In relating this to actual childbirth, Jarrell was perhaps stating that whoever is born into this world must eventually face death, some sooner than others. Jarrell could also be giving us an insight into the callousness of war, himself being a combatant.

Many times, those fighting are very young, barely out of training.

Perhaps Jarrell is using this poem to convey the fear of many young airmen who were taken away from their mother’s comfort and shoved into this harsh environment. The next line, “Six miles from earth, loosed from its dream of life” (3), also displays the futility of life. The gunner, so far away from everything that was comforting and familiar to him, felt detached from what he knew of life. He knew it was only a matter of time before “[the gunner] woke to black flak and the nightmare fighter” (4). The enemy fighter planes are referred to ass “nightmare fighters” because they frighteningly awoke the gunner from the dream-state he was in so far away from what he knew of reality. Noting the futility of life, the flak and the nightmare fighters could be seen as the tribulations that face us once the womb, leading us closer and closer to death. Also noting on the callousness of war, Jarrell shows that these young combatants faced frightening dangers such as flak exploding around them and enemy fighter planes strafing them.

The last line of the poem is perhaps the harshest reference to the futility of human life and the coldness of war, especially in WWII. The gunner states that, “When I died they washed me out of the turret with a hose” (5). This line seems to state that human life, especially in war-time, is so expendable that the remains of the former gunner are simply hosed out of the plane, in order to make way for the next expendable piece of war fodder. This also gives a very graphic picture of war. Not only was this man killed, but he was so badly mutilated that the most efficient way to remove his remains were not with a coffin, but a hose. The futility of life, according to Jarrell, is once again brought up in that the very thing that the gunner depended on to keep him alive, the plane, is the very thing that ended his life.

In the poem, “Dulce et Decorum est,” Wilfred Owen shows his hatred for the romanticizing of war and war in general. Owen clearly states his disgust for whose who have ever been in war, yet romanticized it as the ultimate patriotic sacrifice when he writes in lines 21-28, “If you could…you would not tell with such high zest/ To children ardent for some desperate glory, / The old lie dulce et decorum est/ Pro patria mori.” Just like Jarrell, Owen shows the gruesome aspect of war in his poem. Wilfred Owen implements large amounts of detail. For instance, line 2 provides vivid images of exhausted soldiers trudging through the battlefield on their knees: “Knock-kneed, coughing like hags, we cursed through sludge.” Owen’s uses of detail, along with other literary devices such as similes, contribute to the vivid and gruesome imagery in this poem.

In line 1, Owen uses a simile to describe the crawling soldiers and also in line 14 when he describes the how the soldiers struggled to put on their gas masks. These images induce a feeling of disgust and gruesomeness. It seems that Owen’s main goal is to produce an image, using such vivid and gruesome imagery, that the reader is chilled at the thought of experiencing something like this. The tone that Owen uses is unchanging throughout the poem. His tone is one of sorrow and regret directed toward the effects of war on young men, and a cautionary tone, warning those who would be fooled into believing that war is some kind of great adventure that all men should experience. The last few lines of the poem reveal Owen’s sympathy for those, as himself, who were lied to about what war was and are now trapped by its everlasting effects on their psyche. However, by doing this, it also cautions readers about the realities of war.

Sorrow goes hand in hand with war. No matter which side one is on, people must die, and a good purpose does not justify death. There is nothing heroic about dying unnoticed, while killing others for a cause that has been forgotten. Most of our society does not want to die in the first place, much less be killed brutally and not have anyone take the time for grieving the loss. In both poems, the authors really did bring out the beast of war. War is not heroic, it is not glorious, and it certainly is not glorious to die unnoticed.

Analysis of Randall Jarrell's "The Death of the Ball Turret Gunner". (2016, Jun 22). Retrieved from https://studymoose.com/analysis-of-randall-jarrells-the-death-of-the-ball-turret-gunner-essay 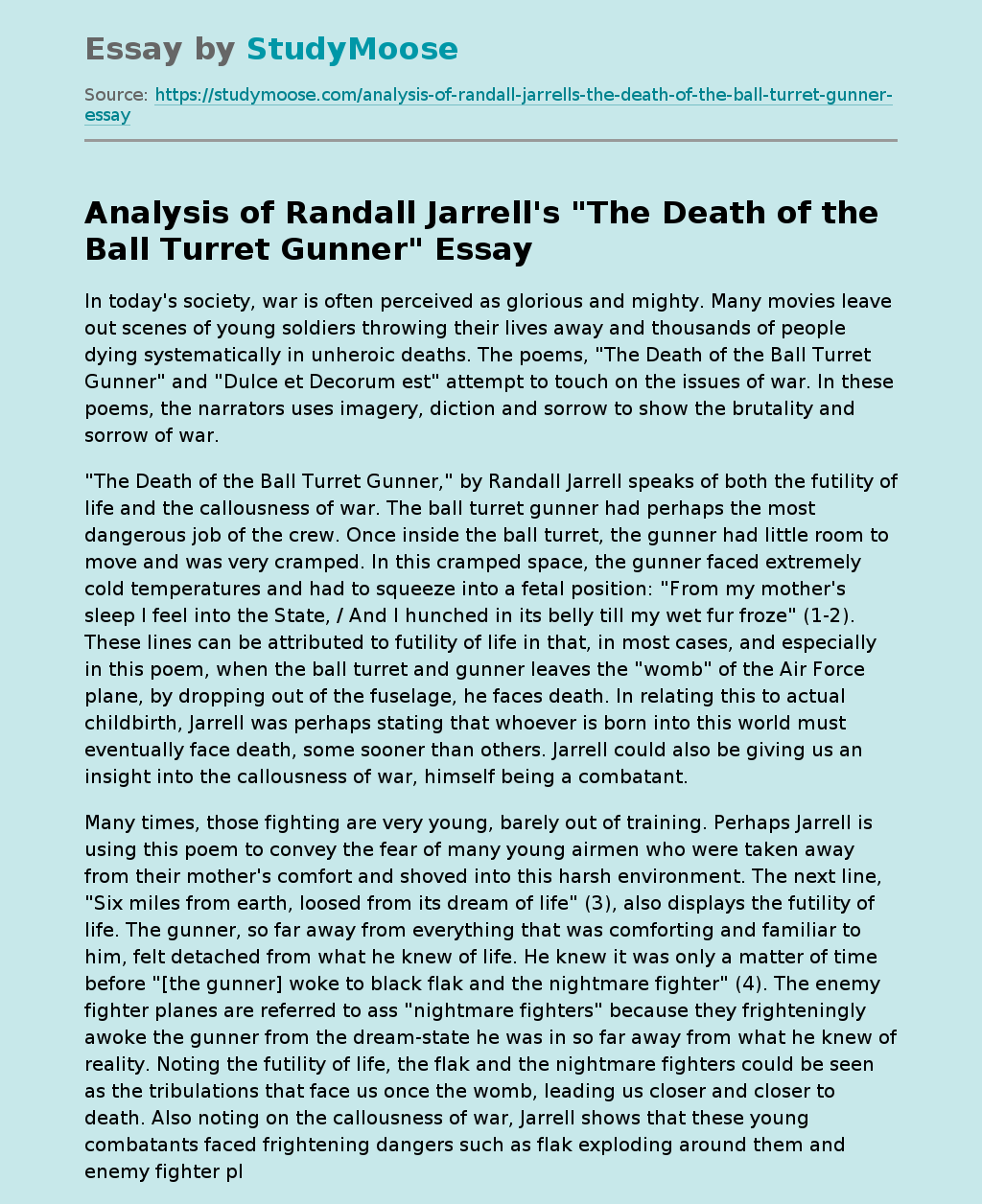