Birthright citizenship, which grants citizenship to any person born in the United States, is a hot topic of debate. Is this practice legal and what are the arguments and counterarguments of approving citizenship this way?

What is the citizenship clause of the 14th amendment? This clause states that; “All persons born or naturalized in the United States, and subject to the jurisdiction thereof, are citizens of the United States and of the State wherein they reside.” (“14th Amendment to the U.

Don't use plagiarized sources. Get your custom essay on
“ Birthright citizenship which grants citizenship to any person born ”
Get custom paper
NEW! smart matching with writer

S. Constitution.”) What this really means is that children born in the United States or US territories, with very few exceptions, are U.S. citizens. This type of guarantee legally termed jus soli, or “right of the territory” does not exist in most of Europe, Asia or the Middle East, although it is part of English common law and is common in the Americas. (“Congressional Globe.”)

The counterargument to this claim is that ending Birthright Citizenship would ultimately increase the number of illegal aliens in the United States.

However, birthright citizenship does not, I believe, solve the problems of illegal immigration it only increases them. This practice, I contend, defies the adherence to the rules of law our country’s sovereignty and only encourages illegal immigration. The following statistics support this contention;

· The number of United States-born children who were given birthright citizenship despite at least one of their parents being an illegal alien living in the country now outnumbers one year of all American births.

· A study of Hispanic women who gave birth in San Diego County from 1991-92 revealed that, “at least 15% of them came to the United States to give birth in this country, and two-thirds of those women said it was so their babies could become citizens.” (“Congressional Budget Office.”)

Each year, 10 percent of all births or almost 400,000 children born are to those who are unlawfully in the United States. (“Why We Should Have a Debate on Birthright Citizenship.”) These children automatically receive many of the same rights and privileges as United States citizens despite their parents’ illegal status. Birthright citizenship also grants these individuals billions of dollars in federal benefits each year in the form of Social Security, Medicare, Healthcare, refundable tax credits, nutrition and housing assistance, and eventually work consent. (“Why We Should Have a Debate on Birthright Citizenship.”) This practice also serves the parents of these children as well. Since they are the wards of these children, they will unlikely be deported and will continue, in many cases, to receive many of the benefits our country provides.

Another counterargument is that birthright citizenship benefits our nation by improving societal diversity. Yet, we are already a very diverse nation. As of 2015, the United Nations claims that, “46.6 million people living in the United States were not born there.” (“Pew Research Center.”)

Citizenship also provides benefits that cannot be gained through a temporary visa or illegal immigration. Firstly, giving birth in the U.S lets them stay longer than the original time frame outlined in their original visa and not be deported. Second, because of present day law, they can become eventual citizens of the United States by having their child fill out a petition for them when the child turns 21.

I see birthright citizenship as making a mockery of those whose journey to citizenship was a difficult and long one. Charles Wood, legal counsel to the United States Senate Immigration Subcommittee from 1995-97, 1985 and 1979-82, wrote a report on his experience titled, “Losing Control of America’s Future — the Census, Birthright Citizenship, and Illegal Aliens”. In this report, Woods revealed that of the Hispanic women who gave birth in San Diego County from 1991-92, at least 15% of them specifically came to the United States to give birth. Two-thirds of those women said they did so in order that their children would become citizens. (“Losing Control of America’s Future.”)

The legal path to citizenship is a difficult task and attempting to gain citizenship, by what some people may see as a shortcut, creates a sense of unfairness to those who worked hard to get citizenship legally. Since there is a limit on people allowed to get visas each year, the process can be very drawn out and long. This is illustrated in the US Citizenship and Immigration Services (USCIS) preferences and time frames outlined as follows;

I’m not a constitutional authority, but it seems to me that no person who wishes to claim citizenship in the United States can also swear an oath to another country or be subject to another country’s laws. People who enter our country illegally are still subject to the laws of their home country. In addition, when they enter illegally they are in defiance of US immigration law. They are, in fact, still citizens of another country. The Supreme Court has never ruled substantially that those children born from illegal immigrants should be automatically granted citizenship. (“Ending Birthright Citizenship Does Not Require a Constitutional Amendment.”)

The subject of immigration in this country I’m sure goes back to the days of the Declaration of Independence. I have read stories and been told stories (my grandparents) of Ellis Island and what it was like to come to this country. It is a contentious issue. I’m not one to wade into the political waters especially since it is such a polarizing topic. I can only read and relate what I’ve learned and what I’ve heard.

My grandparents (on my father’s side,) emigrated from Italy after the second World War. My grandfather, interestingly enough, served in the Italian navy during that same war. They would both tell us stories of their journey to the United States, and how they became American citizens. The path to citizenship for them was not an easy one. My grandfather was a prisoner of war for almost two years but had nothing but good things to say about how he was treated, and his desire to come to the United States. They were both so proud to be Americans, but also very proud of their Italian heritage. How they see present immigration issues has colored my view on these issues as well. They are both far from political, but they see an inherent unfairness in what some people call “illegal immigrants.” They wonder why all immigration is not conducted exactly the way they did it, legally.

I am truly not anti-immigration, since the United States is a nation of immigrants. We are a compassionate nation and people. I don’t believe we as citizens wish to see people suffering. Acts of kindness and charity, it seems, are too few and far in between. We have all seen pictures and heard stories of families wishing a better life for their loved ones. The intentions of many of these people and families are well taken. I was and still are friends with class mates who came to this country in search of a better life. Parents wish for their children the same in all countries, health and happiness. They see the United States as that “beacon of hope”. I am a second-generation Italian/American, so I am sympathetic to those wanting to emigrate here and their desire to live in United States.

I also see our country as a country of laws. I understand these laws are subject to interpretation. However, our government has the power and the duty to say who can be a citizen of the United States and has a responsibility to uphold the Constitution. On the issue of birthright citizenship, it is clear the meaning of the Citizenship Clause, as originally understood, is conflicted. Congress can and should make the legislative solutions necessary to correct this problem and create clear immigration laws that are fair to everyone including those who are here illegally and those who seek entry to, as my grandfather described, “the greatest country in the

Birthright citizenship which grants citizenship to any person born. (2019, Nov 28). Retrieved from https://studymoose.com/birthright-citizenship-which-grants-citizenship-to-any-person-born-example-essay 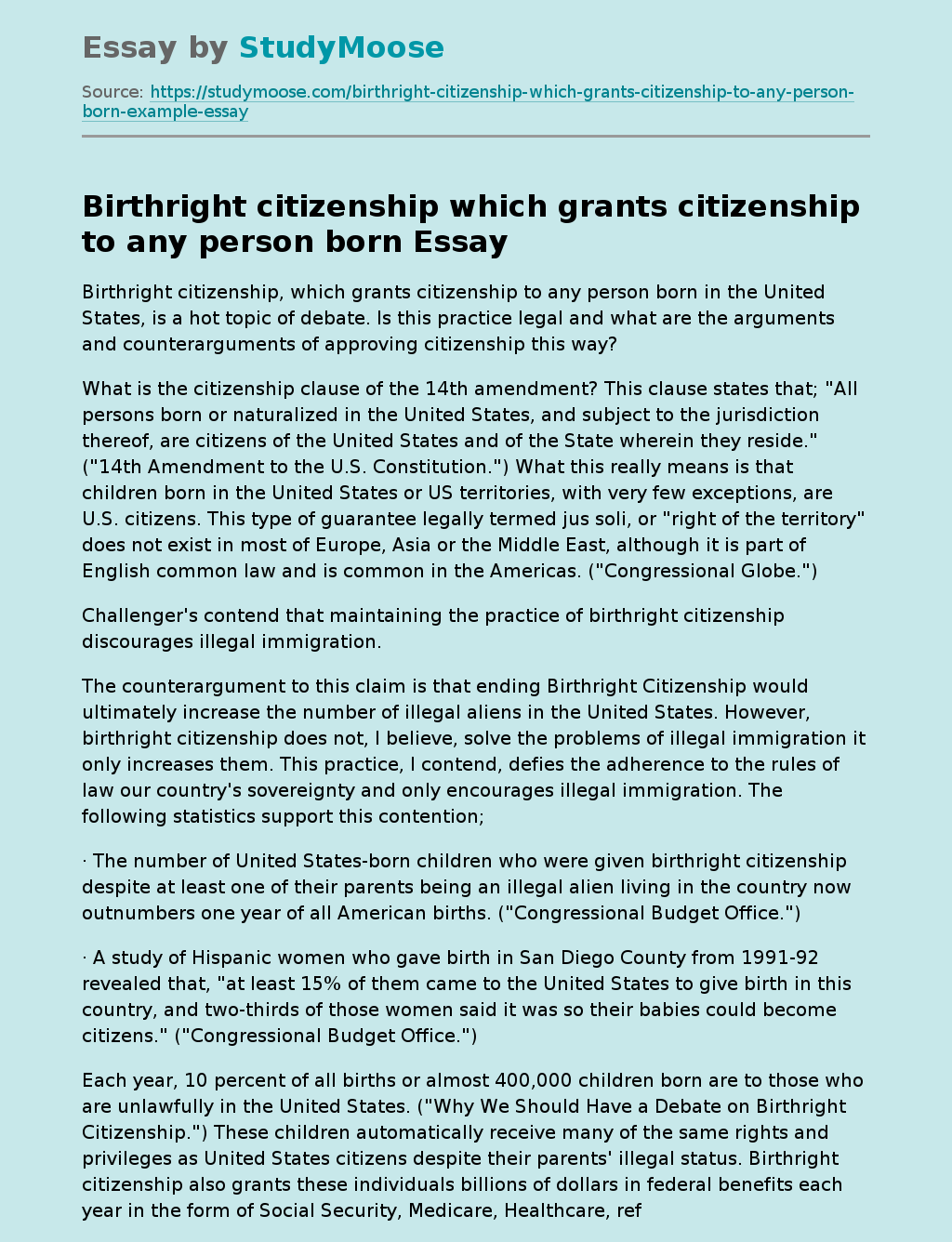