Whether bible prayer should be allowed in schools or not has been a controversy for a very long time. Many have different points of view on this important issue. I believe they should approve religious prayer in schools. Not mandatory, but that they should allow it. The first reason is because of our Constitution. The first amendment states the freedom from religion. Denying bible prayer is like violating the amendment. It “diminishes the religious freedom of students who would like to pray and forces them to act according to the dictates of a non-religious minority.

Don't use plagiarized sources. Get your custom essay on
“ Bible Prayer in Schools ”
Get custom paper
NEW! smart matching with writer

Also, many Christians find it necessary to pray as part of their religion.

The second reason is because approving prayer is the same thing as the government allowing religious holidays and National Days of Prayer.

Another reason is because it could result in social benefits. Recently there has been many school shootings. In the past year we’ve had more than 30 school shooting in the U.

S. Also, alcoholism and drug use have increased. Along with teen pregnancies and HIV transmission. If there was school prayer these issues could decrease. It would decrease by creating “a sense of morality and is desperately needed to protect our children.” Prayer could help a way to decrease crime. Maybe teenagers can strengthen their emotional health with prayer. Bible prayer can also nurture the souls of the kids in school. As well as build up the values that aren’t usually learned at school but at home and community. Prayer can set a standard conduct that people can follow.

Along with that, bible prayer can give students a chance to come together. It can bring them together in the spirit of unity. Critics would say that approving bible prayer in school excludes the people that are not religious. However, the power of prayer can bring people together in many ways. It can also promote tolerance and understanding. It would provide the community with “religious tolerance instead of separation and anxiety”

Another reason is that bible prayer in schools can boost morality seen in the classroom. The proponents of approving prayer in classrooms have said that the removal of prayer has had not so good outcomes. SAT scores can also drop, teenage suicides increase, divorce rates rice and all because there’s no acknowledgement of God’s existence in the classroom. Not having bible prayer in schools can increase the “threat of spiritual decline that enters our communities.”

Prayer is also a personal expression and not necessarily a religious requirement. Its just like a speech that schools would allow from an orderly viewpoint. Many people would say that school is intended for education and not for religion. However, just because bible prayer is approved it doesn’t mean students have to be obligated to listen. If someone listens it’s their choice, if they don’t is also their choice. If they approve it, religious students could take this moment to pray while nonreligious students could use this time to focus or prepare for a test.

The approval of bible prayer in schools still remains a topic that brings disagreements and debates. There’s different point of views, some disagree while others agree. Along with that, there’s reasons on why they believe that. To me, the approval of bible prayer in schools seems the best choice. It has more positive outcomes in my opinion. It can decrease crime, incidents, while also improving relationships between students, increase test scores, morality and more. 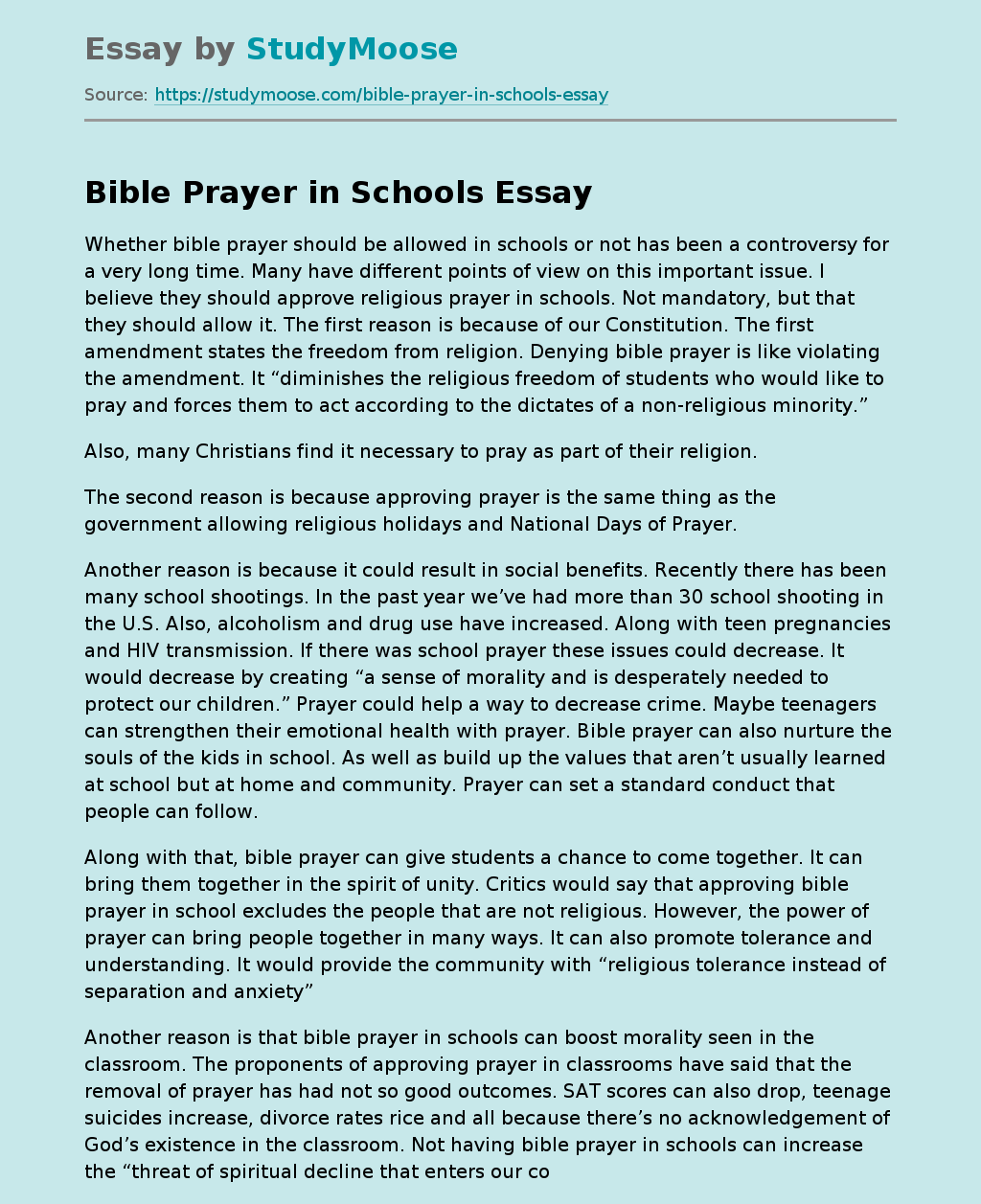