There he was again, peeping through the window with worn, yellow eyes. His coat was moth-eaten and quite shabby. His skin was dirty as though it had not been scrubbed and cleaned thoroughly in quite some time. His shoes had many holes allowing too much ventilation and they appeared to have no soles. The old man shuffled into the coffee shop and ordered his normal cup of coffee without sugar and many times, I would see him looking longingly at the delicious pastries which adorned the shelves.

So, I would purchase two doughnuts and a pie for him to eat during the day and also give him another cup of coffee to take with him as well. The man’s eyes would always light up with gratitude and as he smiled, one could see the coffee stained teeth which seemed as though it was never cleaned and as he passed by, one could get the smell of garbage implying that this man lived and slept on the sidewalks.

As he shuffled outside again, all the patrons turned to look at him, regarding him as a disgusting, bothersome fly. My kindness extended to the man as I made it my duty to collect old clothing which the neighbours in my street wished to discard and I would give it to the old man when he came into the store.

My fellow co-workers questioned my actions and I would just consider it as a kind deed to an unfortunate human. On several occasions, when the old man came into the shop, I would notice the owner, Mr Job, speaking to him harshly and gesticulating wildly, but I never did question his actions for I thought that Mr Job was plainly scolding the man for always coming into the shop and disturbing the customers.

A week later, Mr Job’s father died and two days after the funeral, when everyone resumed work, I was, for some strange reason, quite jumpy and nervous. I was also surprised to see that my friend, the old man, had not been into the coffee shop as yet in order to get his meal. This just added to my unexplanative anxiety. Suddenly, the doorbell tinkled dangerously, and as I looked up, my mouth fell open in utter amazement.

The old man was not shuffling, but striding through the door with a well-groomed black and white ensemble, unlike his shabby coat, his face was well shaven and he looked clean and well-kept, unlike his former dirty and slimy skin and the man was wearing a polished pair of black shoes. His sole less sneakers were no longer existent and his hair was combed properly, unlike the unkempt hairstyles he was accustomed to. The man refused to make any eye contact with me as he made his way across the room to Mr Job’s office. As he strode, the click-clacking of his heels was sickeningly annoying and somehow it just added to my fury. The slamming of the door made me jump right back to reality and as I continued to serve my customers, I could hear my friends laughing at me. They then explained that the old man, my “friend,” was Mr Job’s brother who had just gained a partnership in the coffee shop as well, since their father had died. I was humiliated and it seemed that the two brothers were spending quite a long time in that office.

After about an hour or so, my boss, Mr Job, summoned me to his office, and somehow I think I knew what was about to happen. Mr Job introduced me to his brother, who only nodded and refused to shake my extended hand. The audacity of the man was quite apparent and he made no attempt to suppress his feelings. Mr Job explained to me that it was their decision that there were enough employees to handle the running of the coffee shop and to have me, the recruit, working there, was causing a tremendous strain on the business. I glanced at the other Mr Job and I saw his sarcastic, ungrateful grin which he threw in my direction. My mind was suddenly quite distant and as I looked out the window, I saw how grey the clouds were. Suddenly, I had to face the inevitable. “You’re fired!” were Mr Job’s last words. As he said that, the rain started to fall and I knew that the heavens were crying for me. That day, I had learnt an important lesson, I must not be so gullible and quick to assist others for there would be the great possibility that in the end, one can be reproached and fired for doing so. I rationalised then that it was better late than never to learn such a painful lesson! 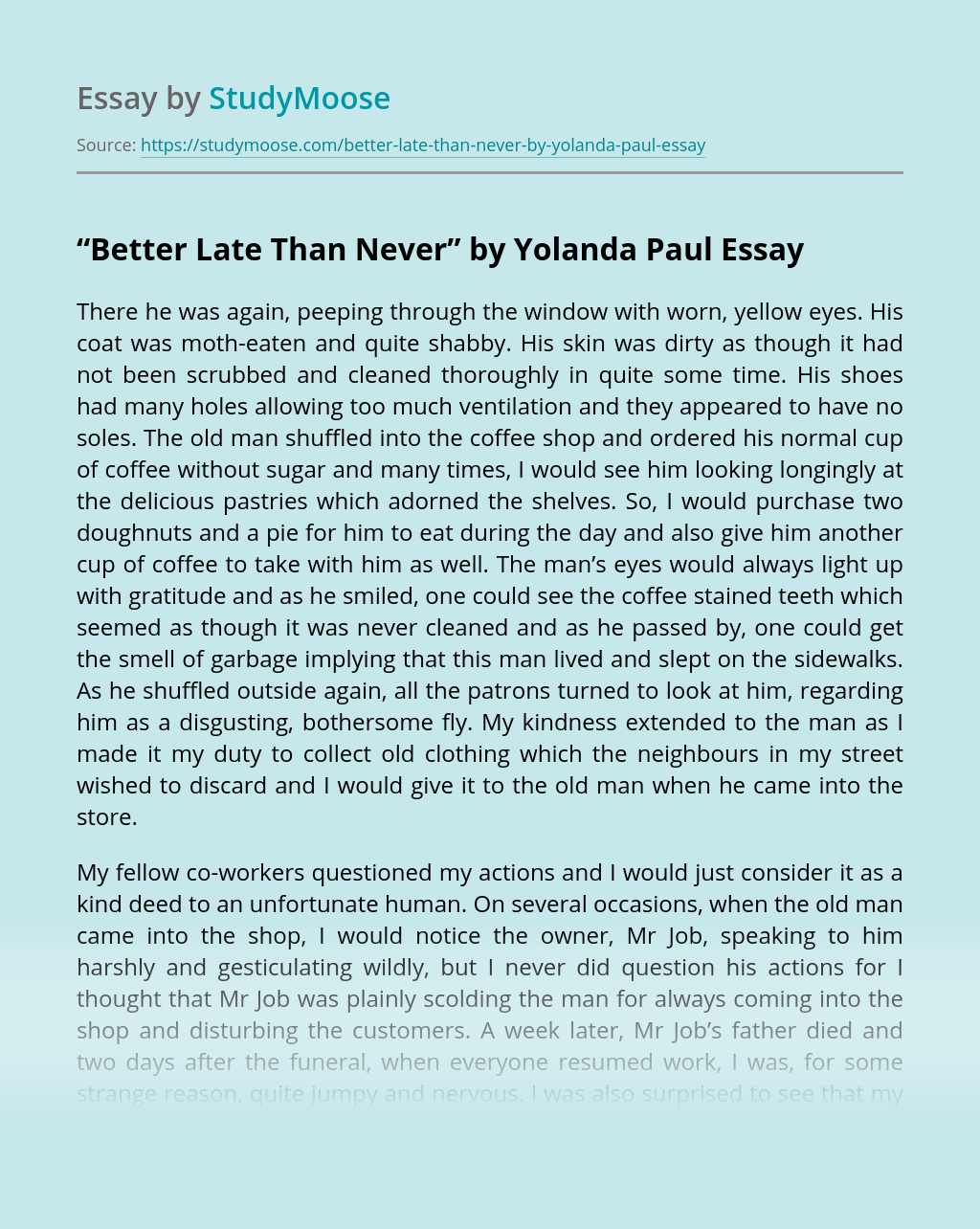 Don’t waste time
Get a verified writer to help you with ?“Better Late Than Never” by Yolanda Paul
Hire verified writer
$35.80 for a 2-page paper
Stay Safe, Stay Original