Beloning as a state and emotion

Belonging refers to a treasured sense of belonging to a communiny or fitting in well with the environments. Individuals belong to a vast variety of groups such as schools and sporting teams. In contrast, the idea of not belonging describes when an individual or item does not take in, is rejected or appears out of place. They might feel separated and unnoticed. A sense of belonging is crucial for people to develop a sense of their own identity in a significantly diverse world.

Not belongiong can create lonely sensations of isolation or alienation which lead to a loss of identity and self esteam.

Director Baz Luhrmann’s film, Strictly Ballroom (1993) and the 1939 poem “Refugee Blues” by W.H Auden both communicate unique ideas concerning the topic of belonging and not belonging. Both texts emphasise the positive power of a sense of belonging has for a specific and the negative impacts produced by a sense of seclusion or alienation.

Strictly Ballroom is a postmodern pastiche, a hybridised genre of fairy tail love which focuses its attention on the ostentatious, fantastical world of ballroom dancing and the focused characters that live within it.

Luhrmann uses a variety of cinematic techniques to produce scenes portraying realism for family and developing social relationships and hyperrealism for the synthetic world of the Australian Dance Federation. The film trusts binary opposites of opposing ideas and contrasting characters to represent the extremes of belonging and not belonging.

When Scott is dancing in the Southern Districts Waratah opening scene where the red drapes are drawn and the dancers start their boring, yet colourful routines.

The use of the red drapes signals that the viewer is going into a theatrical world and the requirement for a suspension of shock. The red curtains symbolise that the movie’s main purpose is to amuse. The illustriousness of the dance world is further emphasised through the exaggeration and self-depiction of Shirley in the mockumentary at the start of the film.

Shirley is vicariously trying to live her life through Scott and, to some extent; her sense of identity depends on her son belonging to the world of the Dance Federation. Close-up camera and low angle shots are used to show the authority and cruelty of Barry Fife within the world of ballroom dancing. The close-ups show the raw expressions on his face. His face is crimson red representing his fiendish ways.

Barry only cares about money, the corrupt dance academy and keeping its monotonous dance moves ‘strictly ballroom.’ High angle shots are used to show that Fran and Scott are inferior and defenceless in the face of the dance authority. Their sense of not belonging alienates them from the flamboyant dance society. Luhrmann uses techniques of dialogue and irony.

The irony here creates a sense of humour and emphasises the façade of the world of dance in which they are ensnared and serves to remind the audience of the abnormality of such a world. Through the use of bright, flamboyant costuming and exaggerated make-up of all the “accepted” dancers, Luhrmann underlines the façade of the materialistic dance world, where appearances are more important than reality. Luhrmann uses costume and body language to stress who belongs and who does not belong in such a world.

Doug wears monotone clothing and integrates with the background, showing that he does not belong. Doug’s secret outlandish dance moves, stress his desire to belong to the world of ballroom dancing. Ironically, Doug has been alienated because of his dancing. Fran also does not belong. She wears baggy, washed out hermaphroditic clothing, hiding her figure. She wears unfashionable glasses and has acne, conveying our stereotypical view of an outsider. As the movie frames progress, and especially towards the end of the film, we come to realize that Fran has changed.

She wears bright red clothes that represent her passion and desire for dancing. Her skin is clear, her eyebrows plucked and her glasses have disappeared. This change symbolises her natural beauty and new sense of belonging which has burgeoned as her relationship with Scott has developed.

Luhrmann uses techniques of juxtaposition to emphasise the contrast between Fran’s world and that of the dance academy. Scott lives in a hypothetical world of dance where his every move is choreographed by the dance academy and his unrealistic mother. In contrast, Fran lives in a natural world free from the superficiality of the dance society.

Frangipani trees growing in Fran’s backyard emphasise the natural beauty of her world. Luhrmann depicts the importance of earthy, realistic and reciprocal connections through the use of cultural themes. Fran and her family have an ethnic Spanish background. Fran’s family lives their cultural Spanish tradition of musical celebrations, dance and passion. This emphasises the authenticity of Fran’s world in contrast to the hierarchical world of ballroom dancing. Ya ya’s insistence that Scott search within for his natural rhythms underscores the importance of individuality in building a sense of identity. This idea is exactly what the Dance Federation rejects. The image of the nearby train tracks also suggests that Fran’s family accept the importance of an ongoing sense of journey in life whereas Barry Fife’s world remains stagnant and as unhealthy as the character’s portrayal suggests.

The repeated use of “my dear,” suggests the couple is intimately acquainted. The first two stanzas set the context for the poem. The refugees have fled to a city where “some are living in mansions, some are living in holes.” Auden uses this juxtaposition, to emphasise the isolation of the refugees who repeat “Yet there’s no place for us, my dear, yet there’s no place for us.” Auden uses similes to also emphasise the plight of the refugees, “saw the fish swimming as if they were free.”

This juxtaposition in that the fish are free “only ten feet away” highlights the fact that the refugees are living in fear on the run. There is also tragi-comic irony in the lines “If you’ve got no passport you’re officially dead”: But we are still alive, my dear, but we are still alive,” which serve to emphasise the complete loss of identity of the Jewish people with “Hitler over Europe.” Hyperboles, “dreamed I saw a building with a thousand floors, a thousand windows and a thousand doors, ” are used to represent the idea that all they are looking for is a place to stay and fit in, however, this is still not possible even in their dreams.

A second related text, “Creep” composed by rock band Radio Head, further conveys ideas on the topic of both belonging and not belonging. The composer of this song expresses ideas that he does not belong. This is emphasised through the use of metaphors and stereotyped images, “I am a creep”, “I am a weirdo.” The use of metaphors expresses the negative self-image of the persona which is a direct result of alienation from society. The persona then refers to another person who does belong.

The composer uses similes to express feelings of belonging to the audience, “you float like a feather in a beautiful world.” The positive images created here are in direct contrast to those of the persona who expresses his need to belong and develop his own sense of identity. This urgency to belong is ultimately expressed through repetition of the phrase, “you’re so special, I wish I was special.”

Beloning as a state and emotion. (2016, Apr 16). Retrieved from http://studymoose.com/beloning-as-a-state-and-emotion-essay 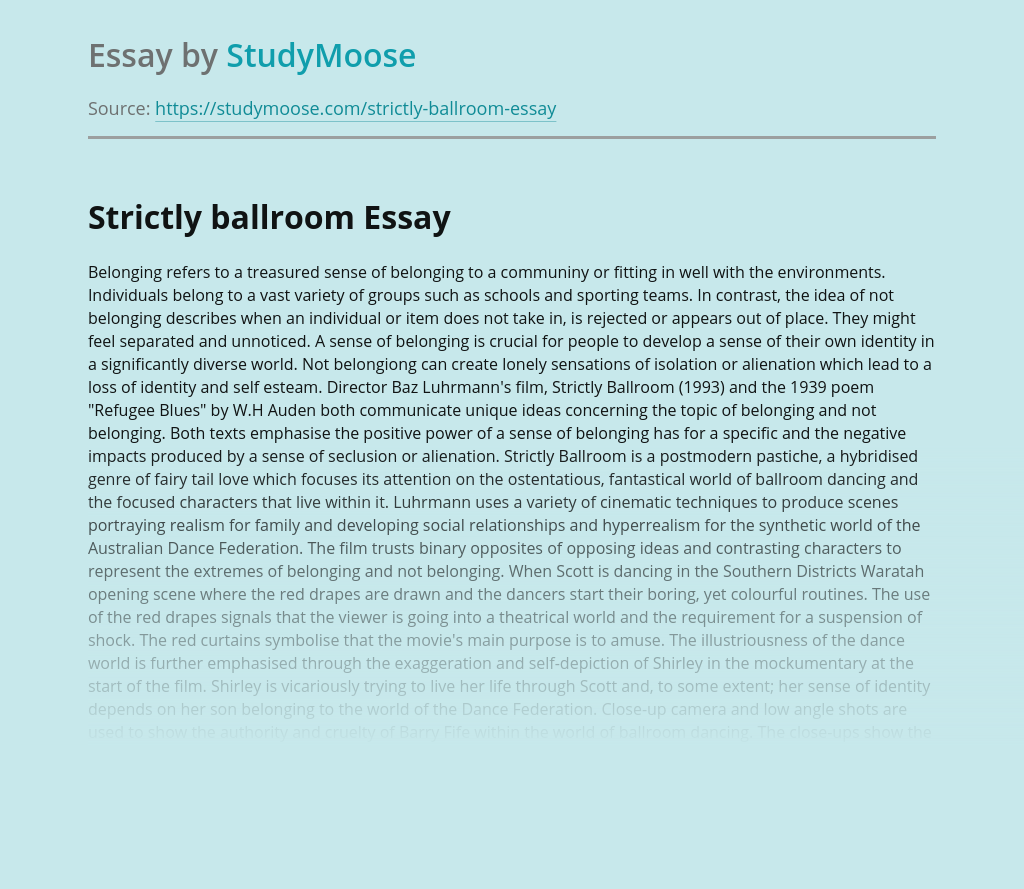 Don’t waste time
Get a verified writer to help you with Beloning as a state and emotion
Hire verified writer
$35.80 for a 2-page paper
Stay Safe, Stay Original