The concept of belonging is interesting to me because the idea is really that of ‘self’. There are many varied notions of belonging revolving around the ‘inclusion/exclusion’ of a person in a societal group, ‘attraction/alienation’ to values, attitudes and behaviours, ‘security/marginalisation’.

But ultimately the idea of belonging is the development of our own sense of personal identity being defined by the groups, communities, lifestyles we align ourselves with.

Les Murray’s poems “The Widower in the Country” and “The Away-Bound Train” explore the sense of belonging by his speaker in different ways.

Les Murray in “The Widower in the Country” uses descriptive imagery and emotive language to highlight the loss of belonging.

The depression of the speaker by having no real direction in life is shown by the words “and pause to look across the Christmas paddocks”.

He is delaying his duties as he is aimless. The reference to Christmas also illustrates widower being alone for a holiday previously celebrated with family.

The ellipses run after “The nettles in the yard…” showing there is further work to be done and the neglect of the speaker evidencing his absence of involvement.

The speaker sits alone “at the head of the table” eating a plain meal of “corned-beef supper” reinforces the widower’s absence and direction in life and also an inability to enunciate his emotions.

The speaker in “The Away-Bound Train” experiences a feeling of belonging to the country through the exploration of the landscape. The speaker is a man on a train leaving the countryside, which he loves, to travel to the city, which he despises.

At the start of the poem the speaker describes his ideal home in the country “I stand in a house of trees … a creek runs grey with sand”.

The speaker then describes the landscape (“the near hills rise steeply and fall”, “the upland farms are all bare”) which is followed by a declaration of allegiance to the country (“and this is my country”).

The warmth of the cold July fire reflects his sentiment of home. Even though he reminds himself that the warmth of the fire “is the past”, his mind, he says, “trails far in the wake of the train”.

At the end of the poem, the speaker wills himself to go back to sleep and his dream. He literally closes his eyes against reality and returns in his imagination to the country he is leaving.

The use of the simile “just like an angel … your skin makes me cry” conveys how unreachable, unapproachable the girl is to him. This expression of distance illustrates how inadequate the person feels when compared to his object of desire.

The use of obscenity “What the hell am I doing here?” conveys the frustration and anger felt by the person at not being accepted. This is supported by the change from poetic language to blunt speech “I don’t belong here”.

The contrast between the opening of the song and the chorus stresses the impact of the anger and frustration over wanting to belong. The opening lyrics are very soft with gentle imagery “You float like a feather, in a beautiful world”. The lazy guitar tone and rhythm then build up to what seems like an emotional breakdown with the singer and the guitar screaming in despair and anger “But I’m a creep, I’m a weirdo”.

The ostinato (musically) portrays the songs obsessive lyrics, which depict the angry rage of an unsuccessful crush. The theme of alienation is reinforced “I want you to notice when I’m not around”.

“You’re so special, I wish I was special” shows the person wanting to belong with the other who he sees as extraordinary. 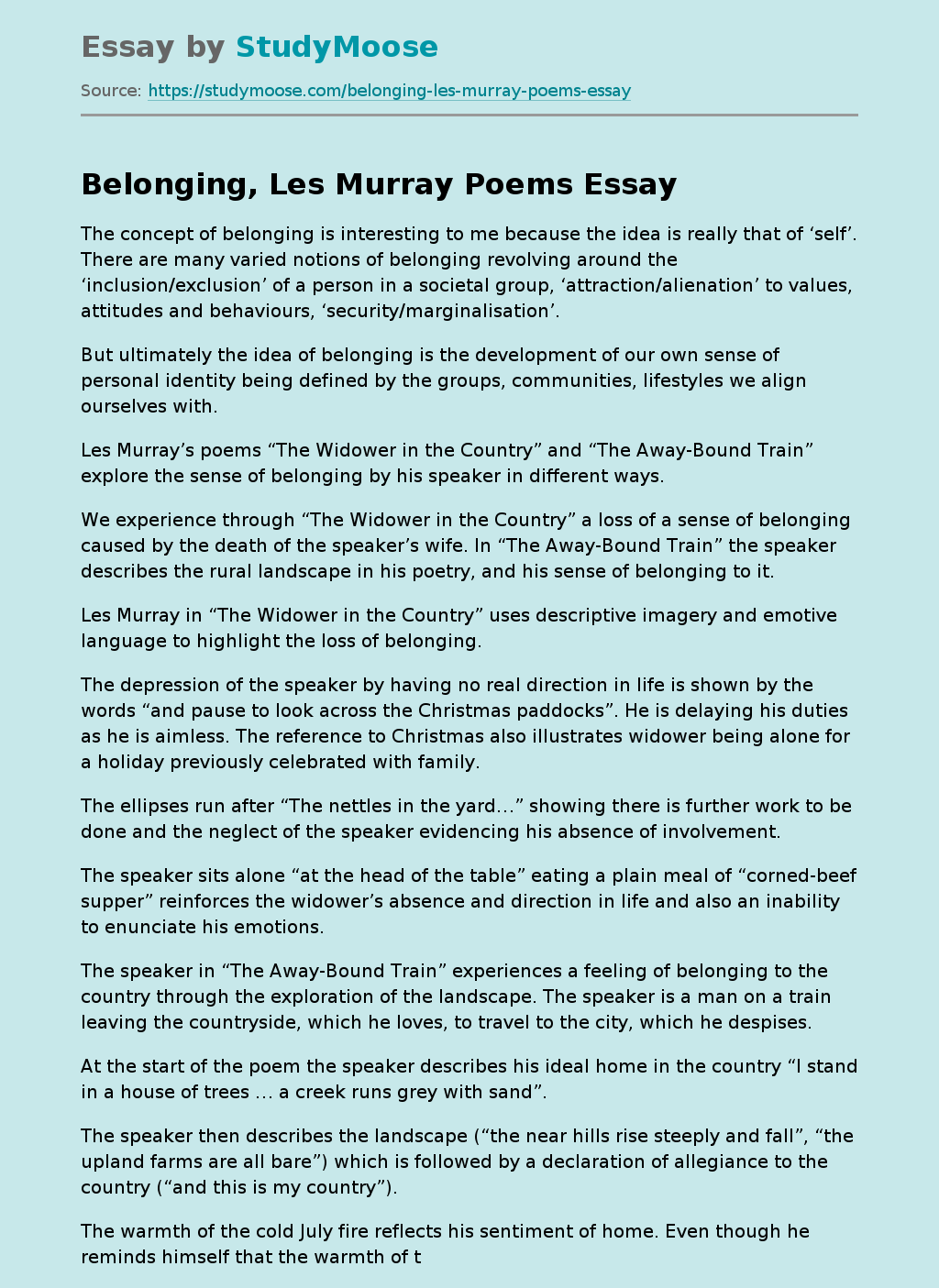