Every person wants to know their worth. They want to be known and want someone else to verify the one thing she should already know. You are gorgeous. You are beautiful. The first impressions are based on appearance and pose. Some people find enjoyment in competing on who looks the best, who has the best talent, and who is a team player. Beauty pageants or contests are widely accepted all over the world with women, men, and children who eat, breathe, and sleep excelling in all categories.

Don't use plagiarized sources. Get your custom essay on
“ Beauty of Beauty Contests ”
Get custom paper
NEW! smart matching with writer

But why is it so important? I think that beauty contests are beneficial for a number of positive reasons. Participants use their physical talents to excel competitively just as those who decide to try out for a sports team. Beauty contests were not only designed for entertainment, but also for opportunity. Some may argue that beauty contests are degrading and should be banned on all corners of the world for exploitation. When the outlook of society holds beauty prominent, a beauty contest promotes the ideal of perfectionism in human kind in the form of entertainment.

With that being said, should these contests be branded as a good or bad influence on the people of the world? A beauty contest is a competition that mainly focuses on the physical beauty of its contestants (Wikipedia, The Free Encyclopedia). Beauty pageant contestants perform an elaborate balancing act between representing themselves in terms of liberal personhood and individual achievement and participating in competition dedicated to the display and maintenance of ideal feminine form (Benet-Weiser 25).

There are beauty contests for various categories of age, sex, culture, and sexuality. Although the main focus is on beauty, the contests also include categories in talent, swimsuit/ evening /formal wear, question and answer, and judgment of character. Each contestant has the opportunity to compete in the performance of their given talents. They also display their figure in chosen apparel for a particular wear.

The questions range from personal topics to political views. In the end, panel of judges evaluates each contestant, and the woman who garners the most points in the various events of the pageant wins and is crowned queen (Benet-Weiser 25). The winner of the contest may be awarded with a tiara, title, trophy, sash, savings bond, or cash prize (Wikipedia, The Free Encyclopedia). Historically, beauty contest have deep roots extending back into Greek mythology when Eris began the Trojan War with a prize “For the Fairest (Cohen 3). In 1854 P.T. Barnum, a showman, tried to promote contests where women took stage, but he couldn’t find any respectable women to take part in these competitions. At the end of the century, newspapers later adopted Barnum’s idea and held photographic beauty contests. Only when female public bathing became acceptable did beauty contests jump from the newspapers to the stage. The style and presentation change after World War II, they became patriotic and respectable (Cohen 3). Money is a major incentive for many women who enter pageants. Winners of the Miss America and Miss Universe contests back in the 80’s earned somewhere been $100,000 cash prize, a new car, a new fur, a new wardrobe, and from $1,000-2,000 for each appearance (Ebony Magazine 174). Every year at least 7,500 beauty pageants in the United States are franchised by either the Miss America Scholarship program or the Miss USA pageant (Benet-Weiser 31). Just like a sport, beauty pageants are big business for the big spectator “sport” for the millions to watch (Ebony Magazine 173). The women in the pageants themselves use the experiences to achieve success in the world of fashion, modeling, and television. If you still want to understand why women compete in beauty pageants, you many need to understand the underlying causes for these questions. While the popular press and vast segments of the public take beauty contests seriously, scholars generally does not (Cohen 5).

Feminist believe that women shouldn’t be exploited and commended to a particular cause because she is beautiful and everybody likes her. Feminist empower women to use their knowledge and learned skills to show just how impressive they are in their minds to match the external beauty that catches attention. Although, feminists played an indirect role in shaping how beauty contests are now defined (Benet-Weiser 24). However, because beauty pageants remain dedicated to the objectification of women’s bodies, the goals of these events seem to remain contradictory and conflicted. (Cheris Kramarae 104). Some other issues against pageants include political and some cultural differences. We also look into the opinionated reasons that these contests are featured as exploited and our own contradictory responses. For example, some people think that beauty contests are surrounded by young desperate women who use beauty and plastic surgery as their advantage. For the younger beauty pageants, they involve the alteration in small children physical appearance with enhanced beauty modifications and sometimes plastic surgery. Most people frown at the sight of an overworked child and an overbearing mother who forces her child to participate. Although, I’m sure here that someone has a choice in what they want and what they can handle.

As pointless as others view beauty contests, they share a purpose in the world. Just as a surfer is judged on his technique and ability to stay on the board, beauty contestants are judge on categories that the viewers decide to watch and the judges want to see. So as you can see beauty pageants have been around for as long as we can remember. In the earlier years, women were afraid to present themselves on stage and call it a sport. But just like any other sport, to be a champion you have to take the correct measures to be ahead of the competition. To succeed in competition, one person must possess the power, effort, determination, and a great skill to become a champion. In a beauty pageant, the queen possesses the succession of beauty. In competition, she is the Queen of beauty. 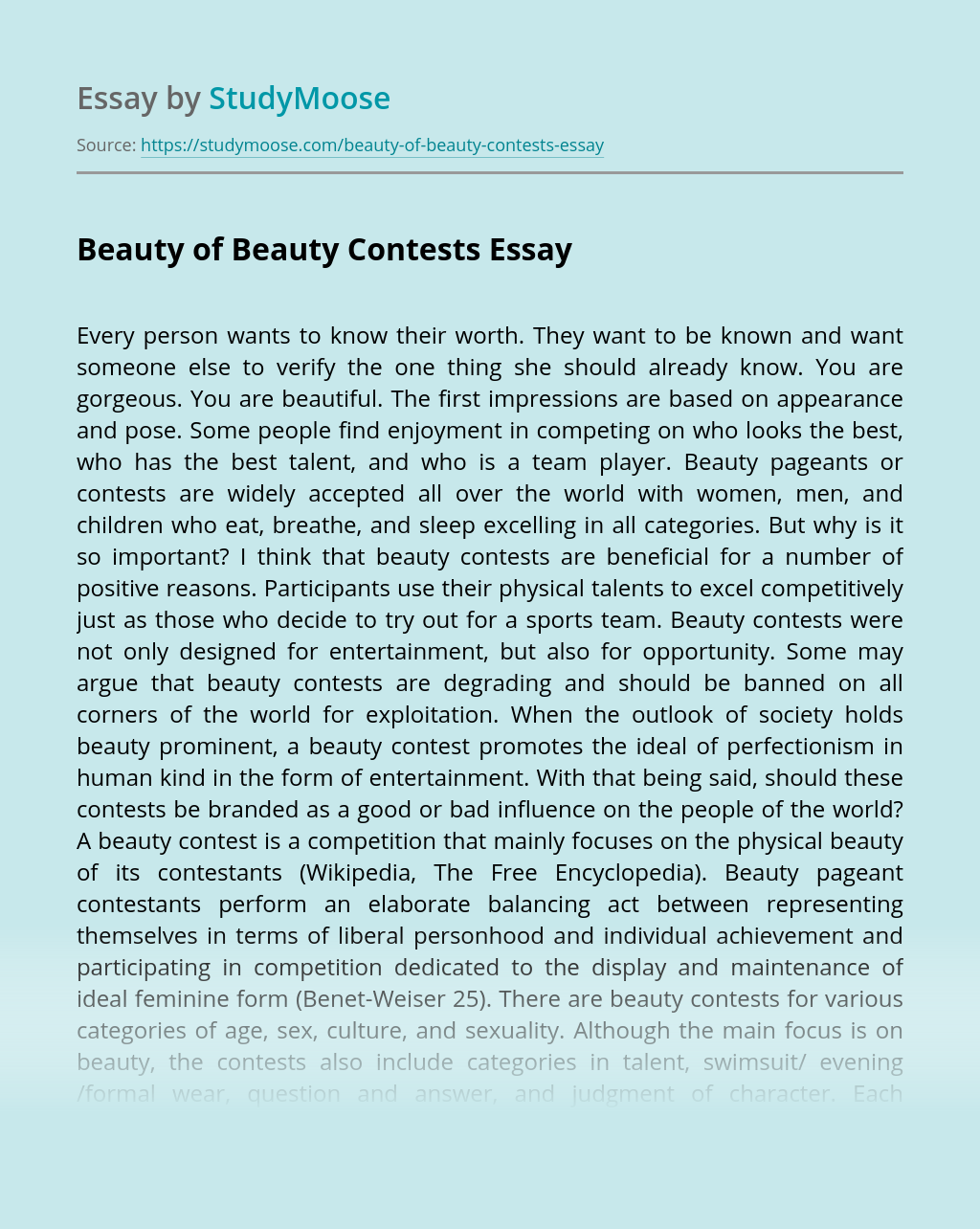