We live in a country where television and advertisement is designed to entice people into always wanting more than what they already have. This enticement is achieved by feeding into the human desire for happiness. Advertisers create persuasive campaigns that inundate the public with images of societies narrow interpretation of success and beauty. These images are then presented as a precondition to the happiness that human beings are searching for. When a person’s reality does not match this narrow image, the message sent through television and advertisements is that in order to be content people need to find a way to acquire it.

Don't use plagiarized sources.
Get Your Custom Essay on Beauty by Jane Martin Just from $13,9/Page

As a result we live in a society where people are continuously longing for a happiness that can only be achieved through things that are fleeting and external, which creates feelings of discontentment In the satirical one-act play “Beauty” by Jane Martin the two sole characters are Bethany and Carla.

Their behavior demonstrates the affects of discontentment caused by the media.

Despite the fact that both of these women are reasonably successful, they each want the things that they do no have that are present in each other. Carla is beautiful and wants to be smart and Bethany is smart and wants to be beautiful. Under normal circumstances the longing to have what someone else has, is usual either eventually abandoned or translates into negative emotions that are never acted on. However, due to the benefit of theatrics, these yearning become achievable because Bethany arrives at Carla’s house armed with “…a goddamn genie and one more wish!” (1108) The play is a microcosm of the discontentment in our society. This discontent is exhibited most effectively through Bethany’s character since she was the one more willing take exaggerated measures to obtain what she wanted.

Although, Carla similarly voiced some discontentment with her life, she was not willing to exchange her reality for someone else’s. When we segregate each character and situation for examination, we are able to see how Martin purposefully crafts a story to effectively leave the audience thinking about the impact of discontentment in society. Carla is a symbol of the allure and illusion of beauty. She is a model the sociocultural standard of feminine beauty in society, however nothing about her is as it appears. Although she is a model, she is struggling. She is beautiful but her looks were altered by cosmetic surgery. Men were attracted to her but the quality of the men is questionable. The fact that she is not smart is to deliberately create the stereotype of the dumb model. The media’s use of such unrealistic models like Carla and it makes it difficult for females to achieve any level of contentment with their physical appearance. Carla is the false god the media forces women to compare themselves against. Her beauty is unattainable as it is the result of drastic measures.

Yet, even if other women decide to go through those drastic measures they soon learn, like Carla, that it does not ultimately bring them happiness. When you examine Carla and Bethany’s relationship, you can further see the emptiness in Carla’s life. She describes Bethany as being one of the only female friends that she has. Reading the dialogue, even beyond the obvious points, there is so much about the friendship that is flawed. Bethany is not even aware that it is Carla’s birthday and when made aware she only half-heartedly acknowledges it before she continues on with her conversation/purpose for being there. Bethany also shows no regard for the fact that Carla and is on the phone regardless of how many times Carla asks her to be quiet. When Carla does finish her telephone the two carry on separate monologues and their conversation only finds connection when Carla realizes that she is the topic. Carla even acknowledges that Bethany does not like her most of the time.

Which forces the reader to question the extent to which Carla understands relationships like friendship. Interestingly, Martin chose to have Carla be somewhat modest and even somewhat self-deprecating regarding her attitude of toward herself and complimentary toward her less attractive friend. This choice is interesting in that we generally think of the beautiful girl in stories as being the morally corrupt one. In popular culture the most beautiful girl is generally depicted as the villain. Yet, Martin breaks from this traditional trajectory. On the other hand, Bethany is an almost villainous character. She is negative, admittedly jealous, self-absorbed, and single-minded in her motivations for things that are fleeting and superficial that she believes beauty gives. She is a successful accountant, a published author, and pretty. However, these things are not enough for her. It could be said that her attitude is an indictment on the fact that women forced to view themselves in terms of their looks.

Carla is allowed in many ways to be more human than Bethany is because she no longer has to strive for better looks. An additional evaluation can also be done of the genie, which is symbolic of the world of advertising. He is a larger than life colorful character that represents the glamour and glitz of the advertising world. The offering of wishes represents the promises of advertisings. The fact that he is “see-through” (1106) is symbolic of the illusion and deception of advertisement. The whole concept of advertising is comparable to a mirage, which is a natural occurring optical illusion, yet even with the scientific explanation it is still an abstract experience that is a combination of desire and imagination.

Advertising is just that, a mirage, a natural occurring illusion that comes into agreement with our desires and imagination. According to the Media Center for Literacy, “advertising is the most powerful education tool in American” which explains why women are conditioned to view themselves this prism. Bethany was the type of person the advertisement agencies target. She was unhappy with herself, as well as someone willing to go to any length or pay any price to obtain the perfect image.

The media works hard at creating a society that view themselves negatively and then they prey on the victims. Ultimately, Martin uses his play to force the audience to question ideas of beauty, happiness, and what it means to live a good life. The characters, Bethany and Carla, present us with different elements of society. Each yearns for something outside of themselves. However, the desire for beauty trumps the desire for other traits like intelligence and personal success to the extent that someone is willing to give up everything for it. 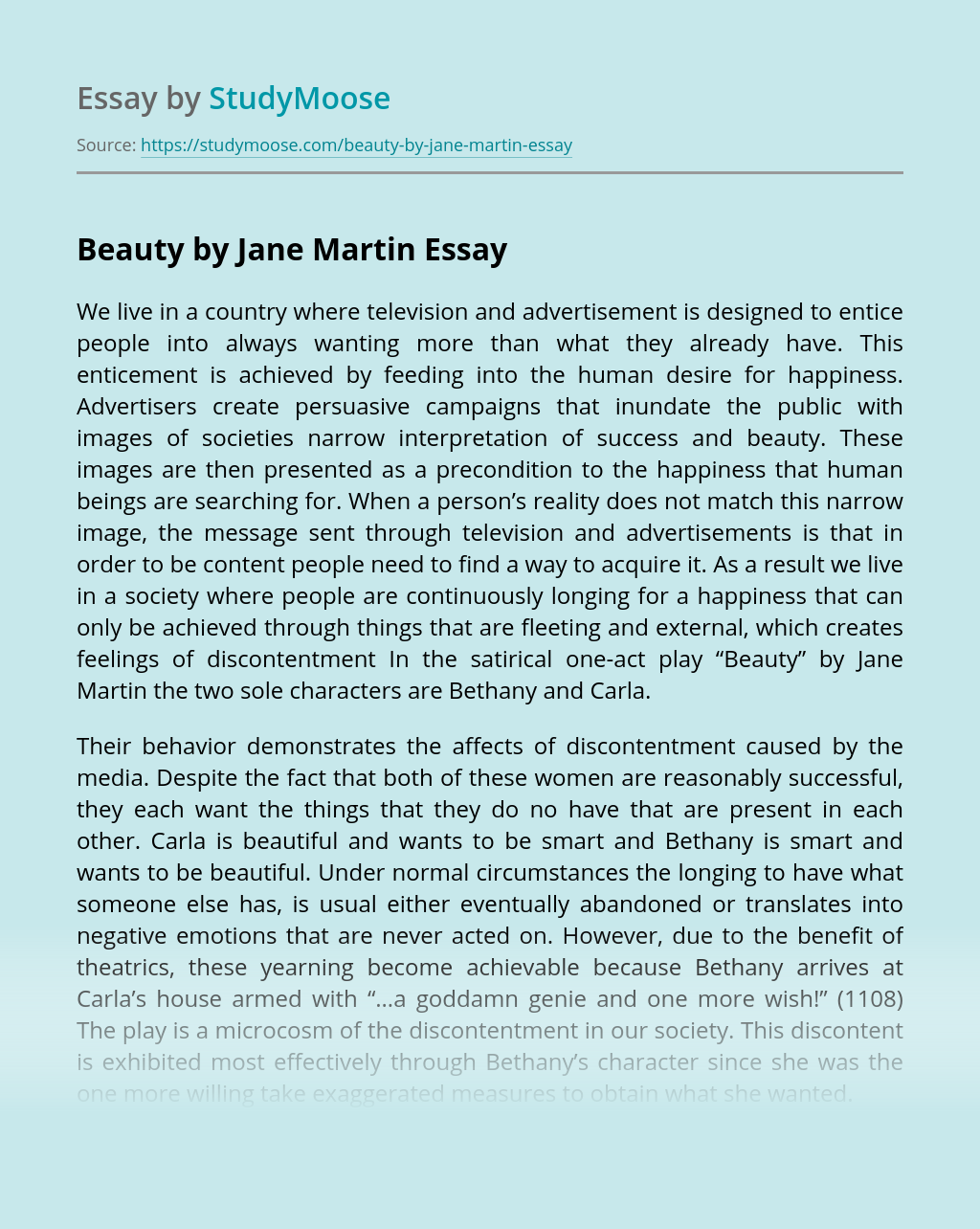 Questions: 1. Should Brisk be advertised on primetime TV or with viral ads in the months following the Super Bowl ad? What are the benefits of each media What are the costs? In this case, since the budget is limited, the viral ads are more doable for Brisk. The benefits of TV ads: * Broader...

View sample
The Effects Of Advertisement and Consumer Buying Behaviour

Advertising is everywhere in today’s world. Advertisers constantly are increasing their ad’s appeals by continuing to push the envelope. Society allows this to happen because people are always ready for the next best thing. One way that advertiser’s use to catch their audience’s attention is sex appeal. Companies want to get the message across that...

Pepsi Co. and Coca-Cola have been in business for a long time and both are largely successful companies in the beverage industry. They both have different brand components in comparison. A few of the different comparisons would be pricing, quality, packaging, logos, brand equity and features. In the following paper we will discuss these items...

INTRODUCTION As if effective marketing communication were not hard enough to achieve, even if we succeed in getting our message attended to and processed, and a positive intention formed, the very nature of memory may step in and upset everything. Memory distortion and plain old forgetting are unfortunate facts of life. The important question, however,...