Advertisement or adverts for short is a form of communication for marketing and very often it is used to either coax, encourage and manipulate the audience – spectators, listeners, readers or a group of specified and targeted group to support the product or service at hand. Not only is it common but also convenient and efficient. There are a few approaches a company would want to promote or advertise their product or service. One of the many common and conventional methods of advertising can include billboards, printed flyers, web banners, web popups, magazines, newspapers and even human billboards.

Don't use plagiarized sources. Get your custom essay on
“ Beauty Advertisement Analysis ”
Get custom paper
NEW! smart matching with writer

Before planning the advert, the product seller should weigh out and consider the three factors that would play a huge role in forming an effective advertisement. The three dimensions are cognitive, affective and behavioral information. Cognitive information would heavily involve about the already existing knowledge. Affective information on the other hand, focuses of the emotions of the individuals and behavioral information focuses on the reaction after reading, hearing or watching the advertisement.

To help analyze the advertisement various types of heuristics are being used. The different types of heuristics are, emotions – direct and indirect, attractiveness, familiarity, expertise, message-length, consensus, scarcity and consistency. These will be used to discuss and critique the advertisement. Emotions Emotions are one of the main factors when discussing persuassion. There are two types of emotion – direct and indirect. A direct emotion requires a superficial processing and it is based on a classical conditioning. Hence or this advert that focuses on a beauty product, one of the many common emotion that it would trigger would be curiosity. The indirect emotions that would be triggered from the advert, would be feelings of gratefulness or displeasure. At a glance, the advert may intrigue the audience by providing a more conventional method to resolve the problem at hand for the face or skin while the other feeling that would be evoked in the individual would be doubtful and weariness as there are various beauty products in the market that does not justify the purposes of the product.

Attractiveness In general, every individual would be very prone to be attracted to someone who is attractive and likeable. Many adverts would usually have an attractive display or an appealing model to promote their products and services. The audience would be more drawn to the advert despite the product and content that is given. A famous celebrity, who is well known and liked, is being used as a model for the beauty product. A more attractive attribute of an individual would allow a much better start for an interaction between the audience and advertisement.

With an appealing model, the beauty product that is being advertised would have a high chance of being likeable and interesting which would decrease the probability for the product to be turned down. Familiarity According to Zajonc (1968) individuals favor products and services that they have been regularly exposed to. Very often, the people or audience would be much more drawn to the product or services that they are able to relate to or if the product is considered to be recognizable to them.

When familiarity is established between in advertisement and audience, the audience would feel the sense of belonging (Monin, 2003). Adverts that The advertisement that is used is familiar and also established a bond of belonging with the audience. The word natural and the attractive model that is being used for the advert is familiar to the audience – women – as we have an already formed perception of what beautiful looks like – flawless and natural looking skin. Which is what the model is showing off.

That aside, it would also able to identify for individuals who are looking for a solution to their facial problems. Expertise Most often, individuals are easily influenced by the behavior of the experts or those who has the upper hand. The credibility of the source is important when an individual is weighing out their options. The individuals need to be assured that the product or services that is offered is trustworthy and competent as this would allow the individual to form a fast perception of the product or service.

Advertisements would usually include pictures of an authority figure or include information that is factual. This advert however does not show or establish any from of specific and clear expertise and authority. Message-Length An advertisement with a long message length would be believed and seen as useful as more information is provided. The informative ad would be more appealing as it offers vital information about the product and services at hand.

However this would only be useful and effective if the audience were to use a systematic information processing. For this advert, very short information is given but however, the information is direct and clear. But message length does not play a huge role when an attractive model is being used and it would be able to also entice the same reaction as an advert that is informative. According to Chaiken (1980), individuals would rarely check the validity of the message that is give but instead to the readily information given that would be analyzed. 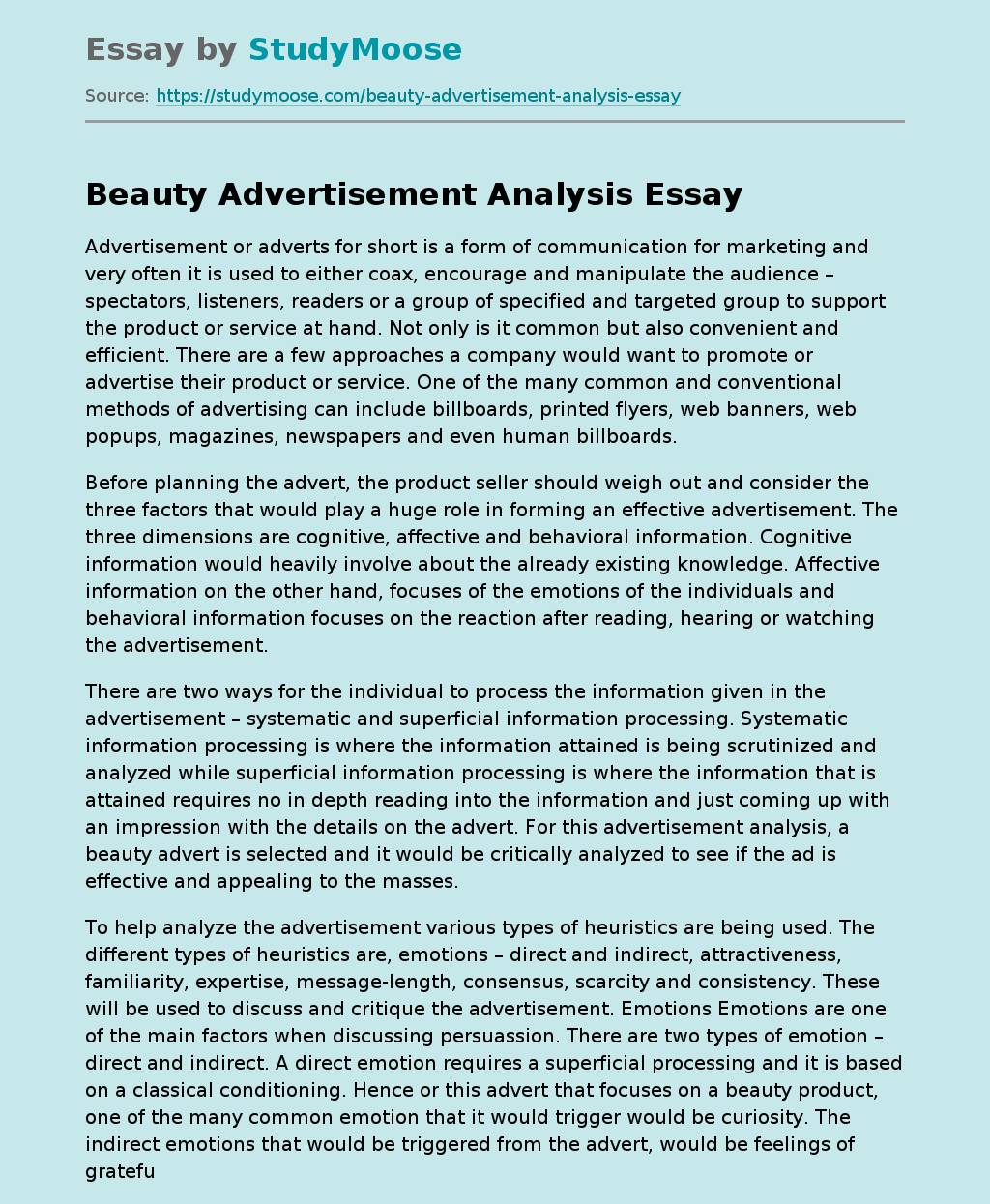