Baybayin: in the Perspective of Filipino Youth

Other than this, Santos (1995) put emphasis on this ancient writing system as a tool for nationalism and pride. He states that after learning more about the script, “You might just feel prouder that you are Filipino.”

This bill, once implemented, would bring about a great change in the country. Of course, it will have corresponding benefits, mostly awareness, and appreciation of the national identity. However, it also has its downsides. This transformation will challenge the Filipinos. There is a lot of criticism on this bill but the resounding ones are saying that before implementing it as a nationwide writing system, it should be taught first in schools.

Don't use plagiarized sources. Get your custom essay on
“ Baybayin: in the Perspective of Filipino Youth ”
Get custom paper
NEW! smart matching with writer

That is why it is too late to have our national writing system and it is nothing but a display for aesthetics. Instead, we should educate the children more about the Filipino language (Acosta, 2018).

Madarang (2018) enumerated some “valid arguments” against integrating Baybayin into the present lexicon. She stated that, using the statement of Pingke as basis, it would only complicate the present problem of Filipinos not being able to use the national language properly, and later on suggested that if the government really wants to increase the Filipinos’ nationalism, they should put emphasis on history and the language instead, rather than introducing Baybayin.

Madarang also mentioned these implications: huge government funding once enacted; its difficulty adapting to the present times; it being Tagalog-centric, and it having no specific origins.

On the other hand, Miele (2017) strongly stated that it belongs to history class alone. For him, it should be taught as part of a broader history curriculum.

Currently, in our country, most schools are moving their schooling years to 12 years from 10. This shift was not as easy as it is for it received a huge backlash to those who are affected by this sudden shift. The education became more expensive for it added another 2 years, and public schools have drastically underfunded and understaffed. The children from schools that are far from Manila have struggles in getting them to learn Filipino or in areas where Tagalog is not their first language.

Since we’re in the era of technology, Baybayin fonts are existing but it would become an enormous expense to get the government offices line with Baybayin. It would also become hard to translate since Baybayin is a syllabic writing system, which is based on syllables and is read vertically. And when it comes to the global economy, Baybayin is nearly useless. May it be in a workplace or related to careers. Instead of focusing on the implementation of an obsolete writing system, where not all provinces historically used Baybayin script, we should focus instead on science, math, and technology that will be of great help in creating a better future of our country. And by implementing the bill, the education sector will be at stake. It will take the teachers to undergo comprehensive training that would take a lot of time and money invested. Baybayin is like going back to the start and learning the fundamentals again.

Having all these different perceptions and opinions about implementing the bill of Baybayin as the National Writing System, it is important that we keenly observe and weigh both sides. Baybayin is indeed a way of distinguishing the country among all other nationalities, thus we should not sit still and let it vanish like footprints in the sand.

On the other side, if Baybayin will be our official writing system, we should take into consideration that there will always be implications, that brings both advantages and disadvantages.

Baybayin: in the Perspective of Filipino Youth. (2019, Nov 15). Retrieved from https://studymoose.com/baybayin-in-the-perspective-of-filipino-youth-essay 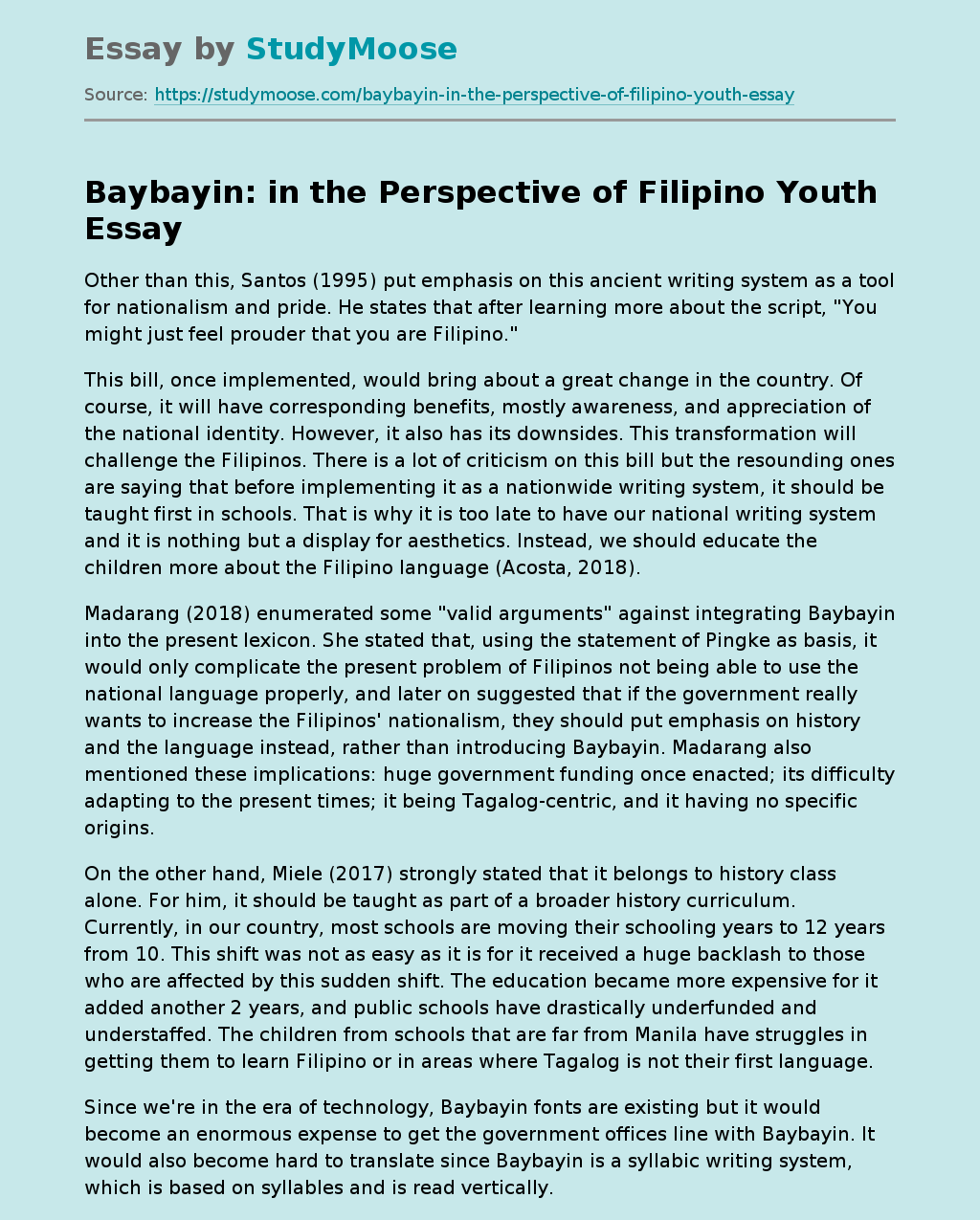