America wanted change and barrack Obama was that change. His inaugural speech was the first time he didn’t need to win votes or fight his campaign, instead he needed to earn the respect of his people, and he did it masterfully.

Obamas main aim at the start of the speech is to make a connection with the audience and gain their support. He does this by moving from singular “I stand here today” to the plural “We the people” which engages the audience to make them feel involved and significant with the use of personal pronouns.

This also incorporates antithetic parallelism “they will not be” “they will be” this is used to give the impression Obama is overcoming a problem by first using the negative not implying an issue and then the positive “will be” showing it is overcome, furthering the audiences assurance in Obama. Addressing the audience as a nation is used to rouse feelings of loyalty and patriotism extending Obamas connection with the audience by establishing the common feeling of pride in their country, and consequently their president.

Once Obama has established a bond and created a sense of community amongst the audience he begins the transition from past tense to future which is cleverly done with the use of repetition “so it has been. So it must be” which prepares the audience for hard hitting issues which Obama raises unambiguously “our nation is at war” “homes have been lost” “our schools fail too many”, the open manner Obama presents these issues in make the audience feel trusted and the use of the personal pronoun “our” makes the audience feel responsible and powerful in solving these predominant problems.

When addressing these issues Obama use emotive and language and imagery such as “violence and hatred” and “greed and irresponsibility” which adds emotion and shows the audience that Obama is passionate about solving the problems he faces which adds impact and conviction to the line “know this America they will be met” which regains the trust and support of the audience by promising that he will solve these problems. Obama adds emphasis and effects on messages by drawing a contrast “rising tides of prosperity and the still waters of peace” compared to “gathering clouds and raging storms” by talking about the opposite in a positive manner “raising tides of prosperity” it makes the later, negative phrase “raging storms” even more powerful and impactful. Throughout Obamas speech he tries to appeal to all members of Americas “patchwork heritage” He tries to bond the all members of the country by addressing “Christians and Muslims, Jews and Hindus” and bravely “non-believers” by addressing them all as a one nation. 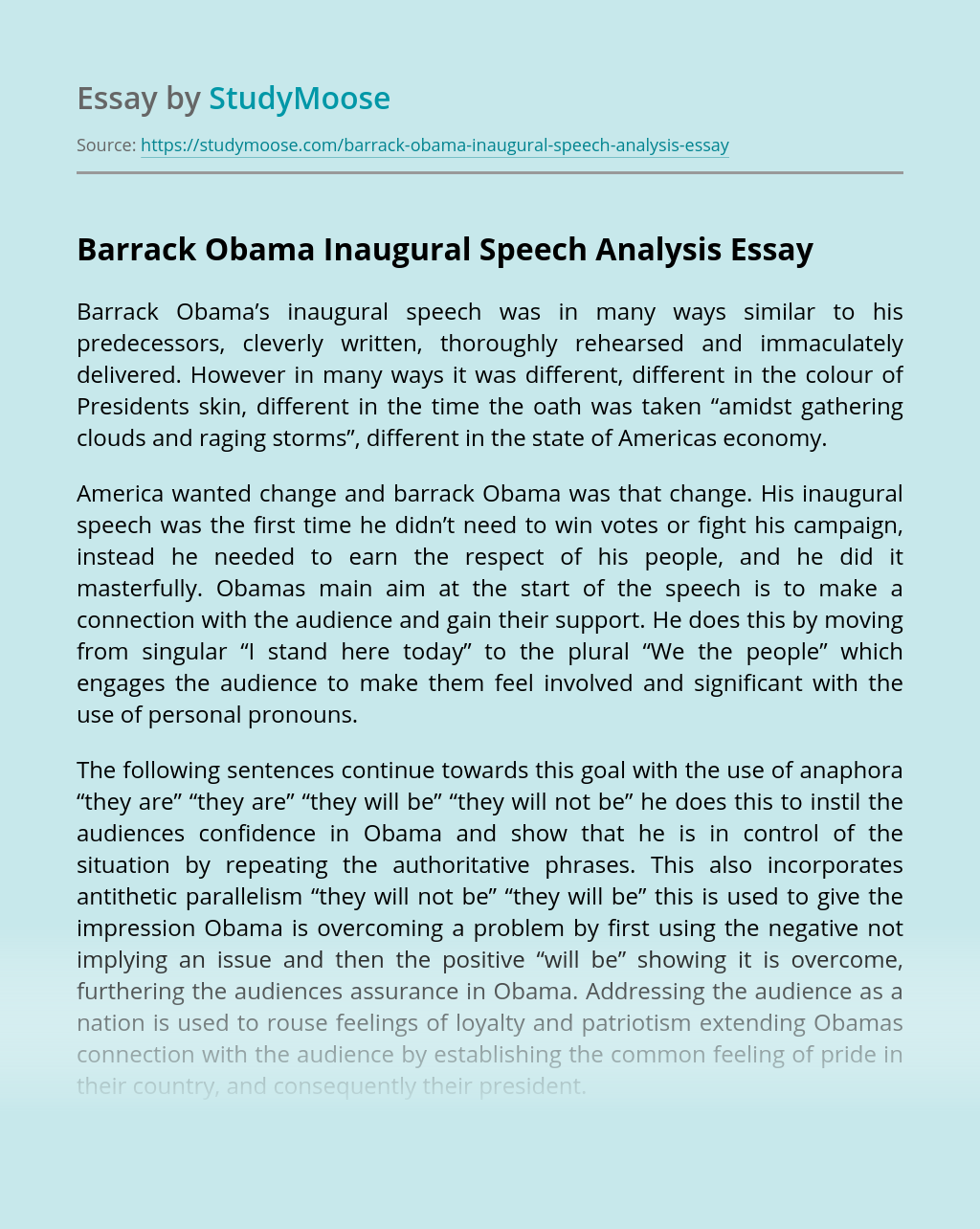 In 1986, three unique sections specified the U.S. steel market; incorporated steel mills, mini-mills, and specialized steel makers. The integrated mills have the capacity to produce a maximum of 107 million lots of steel annually, mini-mills produced a maximum of 21 million lots of capacity a year, and the country’s specialized steel makers could produce...

Sophocles presents us with two men in the Oedipus Cycle, Oedipus, and his uncle Creon. Both are rulers of Thebes and share in their similarities as kings, fathers, and deservers of their fate; yet their similarities are few, while their differences number. Although Oedipus and Creon share these similarities: political, familial and religious (that is...

In 1914 World War I began. There were several causes of this war, and they could be divided into long and short term causes. The long term causes were imperialism, alliances, nationalism and militarism. The short term cause, which acted as a trigger to the Great War was the assassination of Franz Ferdinand. (Humanities Alive...

Cultural diversity is a big part of the community I was raised in and apart of today. Many people spend their whole lives surrounded by one race or culture, but I grew up surrounded by many. Having been raised in a society influenced and shared by so many different races, I had very little idea...

Iago “Mere prattle without practice is all his soldiership.” Iago “I am not what I am.” Brabantio “The worser welcome. I have charged thee not to haunt about my doors.” Brabantio “What tell’st thou me of robbing? This is Venice. My house is not a grange.” Iago “I am one, sir, that comes to tell...