Background of the companies 4 companies are involved in the Hillsborough disaster (event) happened in 1989. They are the Sheffield Wednesday Football Club (SWFC), Liverpool Football Club (FC), Nottingham Forest FC and the Football Association (FA).SWFC is the owner of Hillsborough stadium, which opened in 1899. In 1913, the stadium constructed a new main stand and expand the terraces. A new North Stand was built with a cantilever roof in the early 1960s and improvements were made to the Leppings Lane Ends and North West Corner in the subsequent years.

Don't use plagiarized sources. Get your custom essay on
“ Background of the companies 4 companies are involved in the Hillsborough disaster ”
Get custom paper
NEW! smart matching with writer

In 1986, a roof over the Kop was constructed. On 15 April 1989, the match between Liverpool and Nottingham Forest Clubs for FA Cup semi-final that was organized by the Football Association was held at Hillsborough stadium. However, a disaster has occurred at the west stand Leppings Lane end, specifically at pens 3 and 4. Due to the poor management of overcrowding by SWFC, Sheffield City Council and South Yorkshire Police (SYP), the tunnel collapsed to pens 3 and 4, resulting in 96 died due to crushing and approximately 730 people injured.

Before the 1989 Hillsborough disaster, the FA Cup semi-final between Tottenham Hotspur and Wolverhampton Wanderers took place and major congestion occurred at the Leppings Lane turnstiles and crushing on the confined outercourse at Hillsborough stadium in 1981. Although exit gate C is opened to relieve the crush, 38 supporters still suffered from injuries like stitches and broken legs. (2) Introduction SWFC has allocated 376 stewards, gatemen and turnstile operators for duty on 15 April 1989. They were briefed by police Inspectors regarding the match and were in charge of the ground.

Background of the companies 4 companies are involved in the Hillsborough disaster. (2019, Aug 20). Retrieved from https://studymoose.com/background-of-the-companies-4-companies-are-involved-in-the-hillsborough-disaster-essay 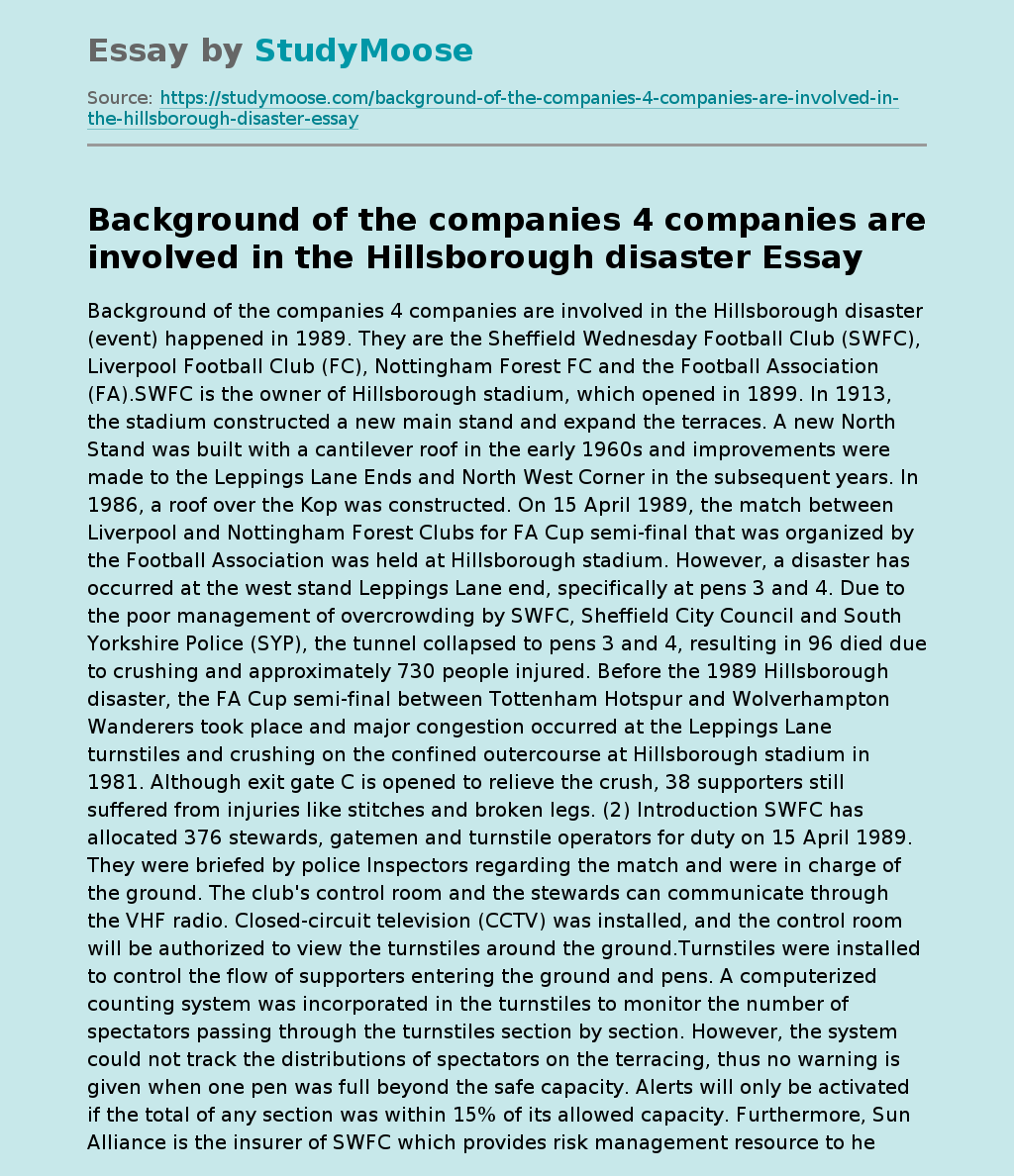