Authentic Act of Valor and Heroism

The epic of Beowulf perfectly shows a magnificent story of bravery, courage and heroism through the characterization of the life of the main protagonist. The adventures of Beowulf, a Geats warrior and the main character of the epic, started as the warrior tries to lend his hand to the terrorized lad of King Hrothgar of the Danes. King Hrothgar’s kingdom was in chaos during that time because Grendel, a hideous monster from a mountain near the kingdom, was attacking the people and warriors of Danes.

Don't use plagiarized sources. Get your custom essay on
“ Authentic Act of Valor and Heroism ”
Get custom paper
NEW! smart matching with writer

When Beowulf heard about the incident, he rushed to the land of King Hrothgar and fought with the monster.

Beowulf killed Grendel together with the two other monsters, Grendel’s mother and an unnamed dragon. Because of his great deeds to the land of Danes, Beowulf was hailed as the king of Danes. Nevertheless, at the end of the story, Beowulf died as he was badly wounded during his last fight with the unnamed dragon.

His people buried him in his own land but his great deeds to the kingdom were never forgotten for a long period of time (The Study World, n. p. ). Through the characterization of Beowulf, the epic successfully shows the true spirit of heroism and courage in the perspectives of a warrior.

Beowulf is not supposed to fight and kill Grendel for the people of Danes. He has his own land and his own people. Nevertheless, because in his blood runs the true passion of a warrior for peace security, he still risks his own life for the sake of the other people.

Beowulf could have lived his own peaceful life in his own land. But he sacrificed his own life for the sake of the people of Danes. This is thus the reason why he was hailed as the new king of the land. And he never failed his people since until his last breath, Beowulf fought with courage and dignity.

This epic, moreover, depicts the theme good and evil through the concrete contrast between Beowulf and Grendel (Luizza, 9). Beowulf is described as the good element in the epic. He was characterized as a warrior with authentic courage and dignity. On the other hand, Grendel is the perfect description of the evil element in the epic. Grendel is the hideous monster who slays kills and consumes on the people and warriors of the land of Danes. He was even described to be ugly, evil and greedy (Hall, 11). Nevertheless, looking critically at the embedded situation of Grendel, there is somehow injustice on his side as the antagonist of the epic.

Grendel cold have not been attacked the people and warriors of Danes if and only if he was not disturb by the noisy feast and drinking of the people in the mead hall. But even though he was only disturbed by the people, he was treated unfair and was killed by tearing his hand off his shoulder. Furthermore, Grendel, as far as literary symbolism is concerned, has something to do with the perception of the Christian medieval culture about monster as a sign of transgression or of bad things (SparkNotes Editors, n. p. ).

Grendel, together with Grendel’s mother and the unnamed dragon, represent an alien or inhuman presence in the society during that time that must be defeated. Today, Grendel and the other monsters defeated by Beowulf can be associated to the sins in the society that must be avoided in order to have peace and balance in the society. In total, the epic of Beowulf remains to be one of the world’s classic since it shows a legacy of a warrior with incomparable traits of courage and dignity. These traits are indeed worthy enough to serve as model of the people to help find peace and security not only in the society but also in the whole world.

Annotated Bibliography Burton, Raffel. Beowulf. NY: Penguin Group Publishing, 1999. This book discusses the oldest poem in a modern European language chronicles of a feudal and newly Christianized world which is still populated by monsters and demons of the ancient world. This book would be very helpful to those who would like to make a research about the religious context of the epic poem. “Beowulf: the epic poem. ” The Study World. 10 July 2010, <http://www. studyworld. com/newsite/reportessay/literature/poembeowulf__the_epic_poem-38644. htm>.

This site provides a brief summary of the epic poem Beowulf. Beowulf is a story of hero who exhibits a true courage and valor by helping the kingdom of Danes to defeat the hideous monster Grendel. Gummere, Francis. Beowulf. NY: BiblioBazaar, 2008. The author of this book discusses a thought-provoking tale about the conflict good and evil which was shown by the main character Beowulf and the main antagonist Grendel. This book will help the literary critic who wants to make a review about the epic poem of the English language and the considered most important work of the Old English language.

This translation, which was made by Gummere, excels the beautiful work of poetry by capturing the feel of the Old English, and specifically the alliterations which pervade the original Anglo-Saxon text. Hall, Leslie. Beowulf: An Anglo-Saxon Epic Poem. US: Readbooks, 2007. The author of this book provides the reader a new translation of the epic Beowulf which is easier for the readers to understand and comprehend. This book is a good material for those who would like to have a line by line analysis of the poem.

Literary critics can easily refer to every line of the epic poem. Likewise, there is an introduction or brief explanation about the epic which can be very useful to those who will make a review or analysis of the epic. Liuzza, R. M. Beowulf: a new verse translation. Canada: Broadview Press, 2000. This book contains a new translation of the epic Beowulf which is easier to understand compared to the other translations made by the other authors. This would be very helpful to those who would like to make a critical review or literary analysis for the epic.

Literary critics can easily refer to the various themes of the epic since they are provided with lines and numbers. SparkNotes Editors. “SparkNote on Beowulf. ” SparkNotes. com. SparkNotes LLC. 2003. Web. 10 July 2010. This site contains a review of the epic poem Beowulf which refers to the Christianity context of the story. In this epic, Grendel symbolizes the evils in the society that must be conquered by the people in order to achieve peace and serenity in the community. This site is helpful to those who want to explore the theme good and evil of the epic.

Authentic Act of Valor and Heroism. (2016, Jul 31). Retrieved from https://studymoose.com/authentic-act-of-valor-and-heroism-essay 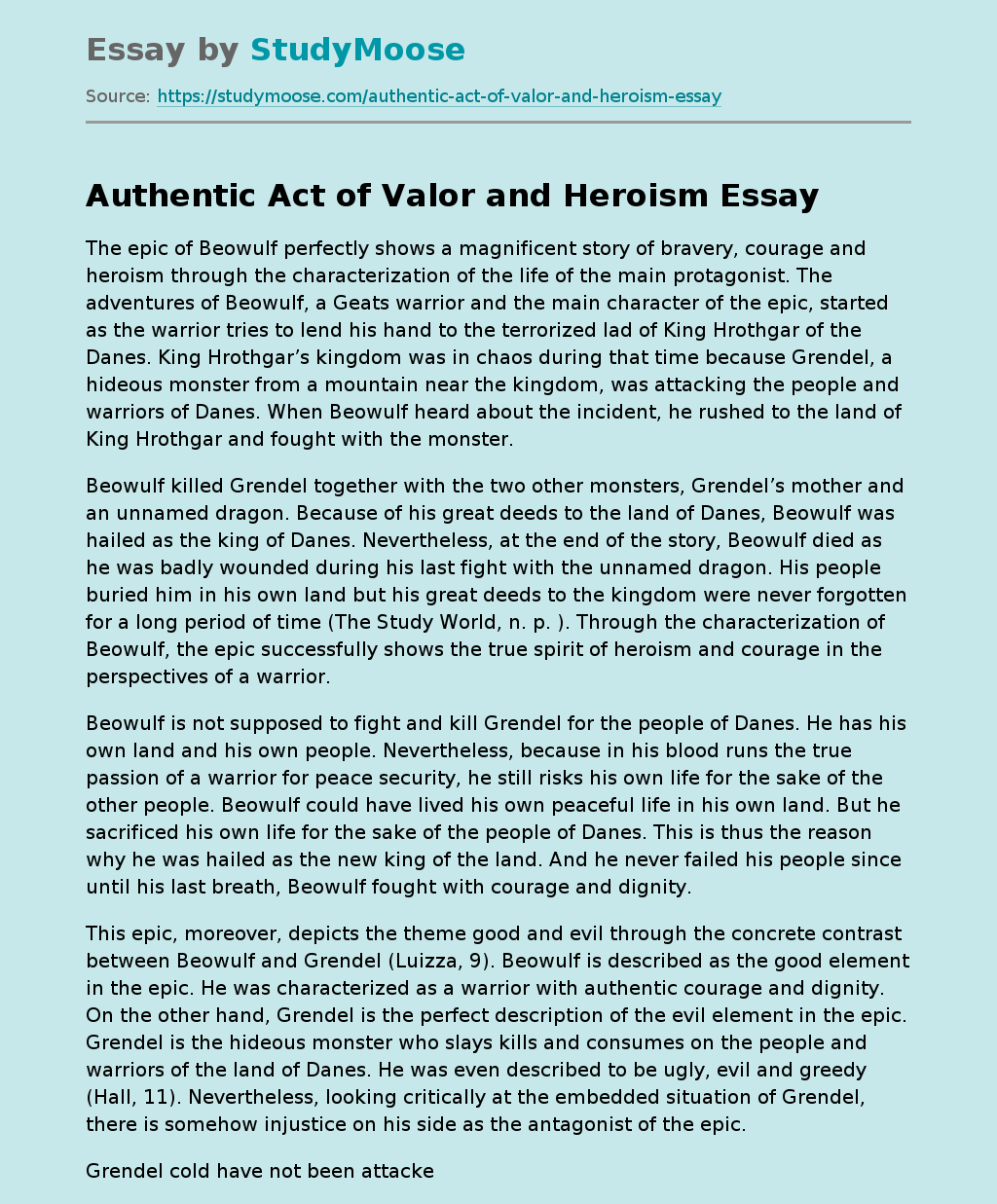