The lekythos shown on the title page was found in the University of Pennsylvania’s Museum of Archaeology and Anthropology. It is titled “Attic White Ground Lekythos” ca. 460 BC and was painted by the “Achilles Painter. ” Its dimensions are H. 0. 385 m. , D. 0. 12 m. It was possibly found in Athens, and is from the Attica region and is labeled as early classical. The image shown on the lekythos is of two women, one a maid and one a mistress. The mistress is seated on the right side, in a chair, weaving a wreath.

Her head is shown in profile, bent looking at the object in her hands.

She is wearing a chiton, a type of sleeveless dress with a rounded neck, and on top of this the customary, heavier himation. Painted in white are her skin and the himation. The white is very cracked however it is still very visible. Her hair was painted in a dark brown. Some scholars have argued that she is also wearing a wreath, like the one she is weaving, on her head.

Her figure is outlined in thin black paint, which is not completely visible on her entire body. She is seated in a chair that is painted dark brown. The other woman on the lekythos is standing on the left side facing her mistress.

The maid’s body is forward, with her head facing to her right, bent downward. This woman has short curly hair that is painted brown. Her skin is also painted white, yet cracked from the years.

She is also wearing a chiton, yet because she is standing the viewer can see that it falls to just below her knees. Her right arm is relaxed at her side. Her left arm is holding a flat round basket that is decorated with a floral pattern in black paint. Black and white ribbons hang from this basket and are possibly for use in weaving the wreath.

Above the seated woman hangs a mirror. There are other objects hanging sporadically through the lekythos; however its placement in a case made it difficult so view these. Through outside research, a pouch and a lekythos are other hanging objects painted on this vase. One of the most important aspects of this vase is the inscription that is between the two women. It reads DIPHILOS KALOS, meaning Diphilos is beautiful. It is not very clear if this inscription has any connection to the use of the vase as a funerary item.

Around the top of the body is frieze with a meandering pattern that has random X designs within it. Above the body, at the beginning of the neck there is a swirly pattern with a few leaves painted throughout. The top of the neck, mouth and the handle are completely black. The base is painted a simple black color. The “Achilles Painter” developed the white ground technique used in this piece. The technique consisted of covering a pot in a white slip of very fine white clay. Black paint was used for outline detailing and brown, purple, red and white were used to add more color to the scene.

The technique was later considered a failure because, unlike red-figure and black-figure painting, the white clay chipped easily and the paint color faded within 50 years. The “Achilles Painter” was an anonymous case painter who reinvented the image of Achilles on a red-figure amphora. Sir John Beazley named him for his perfection of the image. The “Achilles Painter” generally painted two-figure compositions. Frequently seen in his work was the scene of a “Mistress and Maid”, such as the one on this lekythos.

From his style, it was determined that he was a student of the “Berlin Painter,” who was also named by Sir John Beazley. The piece is found in the University of Pennsylvania’s Museum of Archaeology and Anthropology in the Greek Gallery. Other parts of this exhibit include red-figure and black-figure amphorae and kraters. Specifically this piece was part of Kerameikos Cemetery display. This included a background of the cemetery, located in the northwest corner of Athens, outside the Sacred and Dipylon Gates. It also describes how burial rituals and traditions changed throughout the centuries.

While it is not clear if this lekythos was found in the cemetery, the museum uses it to reconstruct a possibility of what it would have looked like. A lekythos is a cylindrical type of vase with one handle attached to the neck. It has a long narrow body with a round base and a round mouth shaped like a funnel. Perfect for storing olive oil they were used for anointing bodies before burial during the prothesis of the corpse. Their main usage as funerary items is backed by their finding on or near grave sites. Lekythoi often represented funerary rites, scenes of loss or senses of departure.

Also found are lekythoi, such as this one, decorated with images of daily life, and common rituals. The figures on these vases are usually outline drawings, lacking in emotion. It is believed that these were left as offerings to the deceased. This particular lekythos was possibly from the within the Kerameikos Cemetery. The museum clearly states in the display that some of the pieces in the exhibit were purchased in Athens; nothing is certainly from the cemetery. After analyzing the purpose of lekythos, I was reminded of the Dipylon Geometric Amphora.

The main difference in this vase is that is relatively all geometric, except for a small frieze in the center, showing a funeral ritual and a few friezes showing animals. However, it is similar to the Mistress and Maid lekythos in its function and provenance. Found in the Dipylon cemetery, it was used as a grave marker, with a hole in the base that allowed oil offerings to be poured into the ground as a way to send offerings to the deceased. As mentioned above, it is believed that this lekythos was found in the Kerameikos cemetery used as a grave marker and an offering to the deceased.

The other work that I was reminded of was Ajax and Achilles Playing a Game ca. 540-530 BC. While this was a hundred years earlier, and very different from the Mistress and the Maid Lekythos in style, both feature inscriptions on the vases. Also evident in both pieces is a swirly design, on Achilles and Ajax’s clothing and on the top of the neck of Mistress and the Maid. Both these pieces have one story shown on the main frieze, anything else is plain space or geometric patterns. The state of preservation of this piece is not perfect, it shows its years. Many of the painted details are missing. There may have been eyes for both the figures. It is obvious that the paint on the skin has been chipped or peeled away. And the decorations on the top seem to be smeared. Overall it is in pretty good condition, the images can still be seen and there are not any visible cracks. 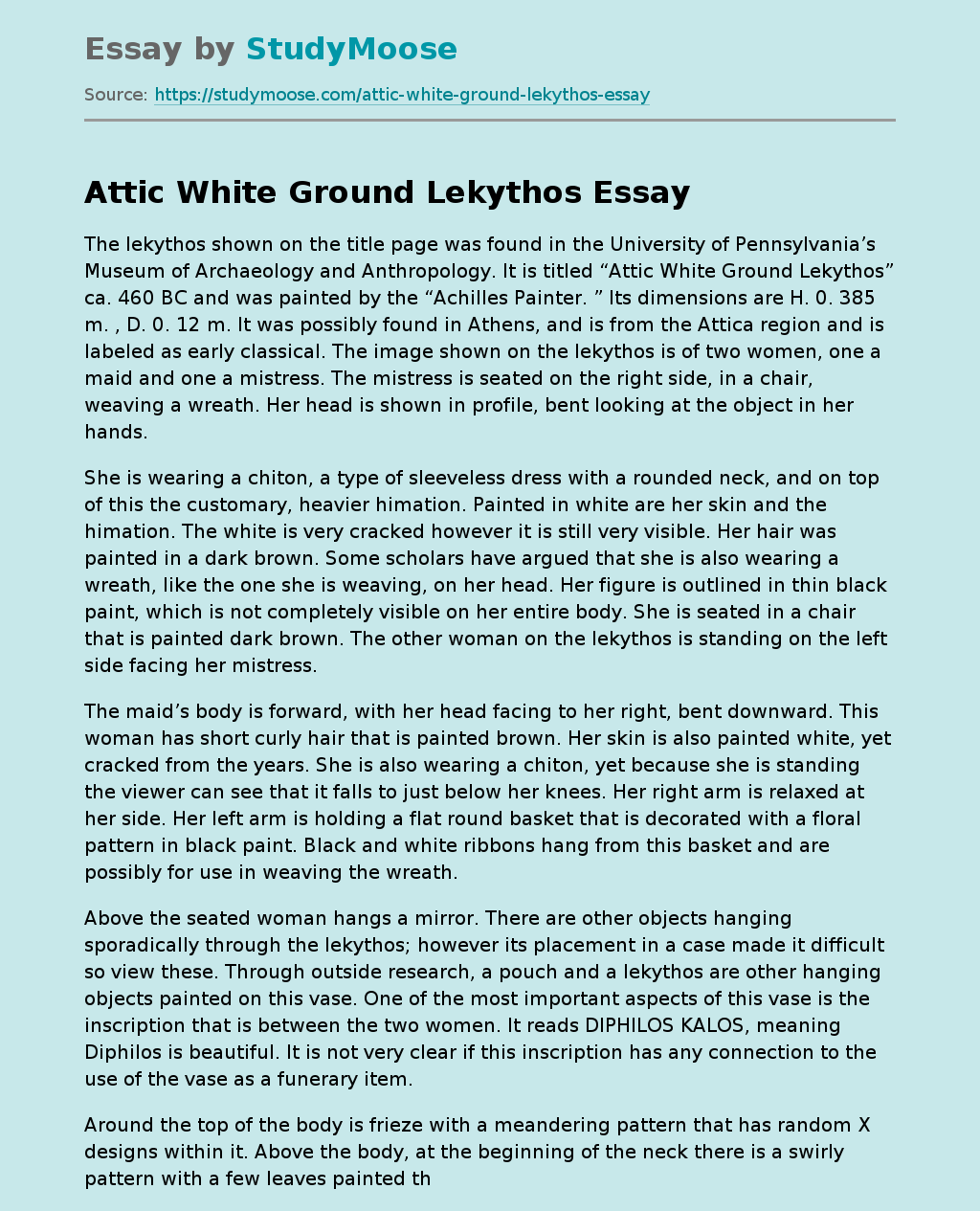