Articles of Confederation provided the United States with an effective government

Using the documents and your knowledge of the period, evaluate this statement.

From 1781 up until 1789 the United States government was based off of the principles of the Articles of Confederation which were created after the Revolutionary War. The articles of confederation created a republic which limited its leaders from much of the powers needed in order to successfully govern the country. This lead to many state disputes, and political struggles. On the contrary, the Articles set up a framework for the U.

Turn in your highest-quality paper
Get a qualified writer to help you with
“ Articles of Confederation provided the United States with an effective government ”
Get high-quality paper
NEW! AI matching with writer

S. Constitution that lead to a strong centralized government and the prosperity of the United States. The limits put forth by the Articles of Confederation led to state and political disputes, and foreign affairs, but it also had strong and effective characteristics to support a government.

The Articles of Confederation’s strong views of a republic and steps set up to avoid autocracy lead to many disputes in the states. Fresh off of the war for independence with Britain, the founding fathers wrote the Articles of Confederation to ensure that their new independent country would not resemble the Autocracy that they had just liberated themselves from, so the created a republic.

Their first attempt, the Articles of Confederation, caused many problems throughout the country. A major problem causer was the clause that majority vote had to be achieved in order to pass a law. This was a major problem between states for instance a letter from Rhode Island to congress stated, ” I enclose their unanimous resolution [to reject] the recommendation of congress, respecting their impost on imported goods…”(document a) .

Rejections of laws were a major problem between states at the time because some laws would benefit states in the south but not the north making it very difficult to pass a majority vote. One states interests could effect another’s simply by rejecting to vote.

Another major problem with the government the articles set up was their inability to make any revenue. Since the national government did not have the power to tax states they had very little. The quote by a former soldier of the revolution, “Every class of public creditors must know the inability of congress to pay their demands, unless furnished by the means of several states… (doc C)” shows Congress’ lack of money and their inability to supply the people with what they need. In order to successfully run a government money is needed and the articles of confederation made it very difficult for congress to make any. In John Jays letter to George Washington, his fear of the government collapsing due to lack of money and power make known the problems the Articles of Confederation have brought upon the nation. ” …We are going and doing wrong, and therefore I look forward to evils and calamities, but without being able to guess at the instrument, nature or measure of them…(doc G)” Jay predicts that if the country stays on the path it is heading, the rich and powerful will obtain more power then the government leading to the complete failure of the articles of confederation. While many changes were made by the Articles of Confederation in order separate their habits from that of Great Britain, it caused many disputes between the states and federal government.

After the Revolution and the Creation of the Articles of Confederation, foreign affairs began occurring quite frequently. After the war with Britain, exports between the United States and Britain decreased from around 6 million dollars to around 4 million and stayed their consistently from 1784 to 1792 (Doc B) . The decrease of trade was a major problem for a new country in the beginning stages of development, and also the population was rising each year which lead to a greater demand of trade goods and foods. Another foreign affair that arose was loyalists who had left the country for safety wanted payment of debts owed to them before the war. Under the articles of confederation they were not required to receive former debts and Britain was required to cede all territories in their limits to the U.S. (doc D) The demands ensuing to the war lead Britain, France, and Spain to restrict U.S. trade with their territories.

Foreign affairs also arose with Spain for they had control of much of the land west of the Mississippi River. Another speech by John Jay, this time to Spain’s minister Diego de Gardoqui, tells of Americans ambitious of expanding westward and that the jump to use the Mississippi and its territories are imminent. Minister Gardoqui disagrees and feels the people are 15-20 years away from wanting to move west.(doc F) Since their is no restriction in the Articles of Confederation to move west, like their was by Britain in the Proclamation of 1763, this causes a problem between Spain and the U.S. The Articles of Confederation lead to many foreign affairs following its establishment in 1781.

Though many problems arose stemming from the Articles of Confederation it also had its positive affects towards the united states government. The main goal of congress when writing the document was to limit the power of the federal government and leave the power in the hands of the people. It may have limited the power of congress to much too large of an extent but it succeeded in limiting the government. Also the fundamental rights of the people, policy on foreign affairs, and establishment of a democratic republic created a sturdy framework for the U.S. Constitution which is still prominent today. The belief that the Articles of Confederation made a solid structure for the Constitution was shown by Rawlin Lowndes in his speech to the South Carolina State of Representatives.

The quote by Lowndes, ” I solemnly called on the house to consider whether it would not be better to add strength to the old confederation, instead of hastily adapting another; asking whether a man could be looked on as wise, who, possessing a magnificent building, upon discovering a flaw, instead of repairing the injury, should pull it down…(doc H)”. Lowndes describes the Articles of Confederation as a “magnificent building” that has minor flaws that easily could be repaired into a strong basis of government. The Articles of Confederation have the right concepts, they just need some improvements to overcome the many problems associated with them.

Between 1781 and 1789 the Articles of Confederation set up an effective means of government that worked well for the short time it was in use, but it also developed problems between states, politics, and foreign affairs. In the documents, problems were brought up describing the limited power congress had, and the troubles between the U.S, Britain, and Spain. These problems lead to the reformation of the Confederation after 1789 in which the U.S constitution was born.

Articles of Confederation provided the United States with an effective government. (2016, Mar 16). Retrieved from https://studymoose.com/articles-of-confederation-provided-the-united-states-with-an-effective-government-essay 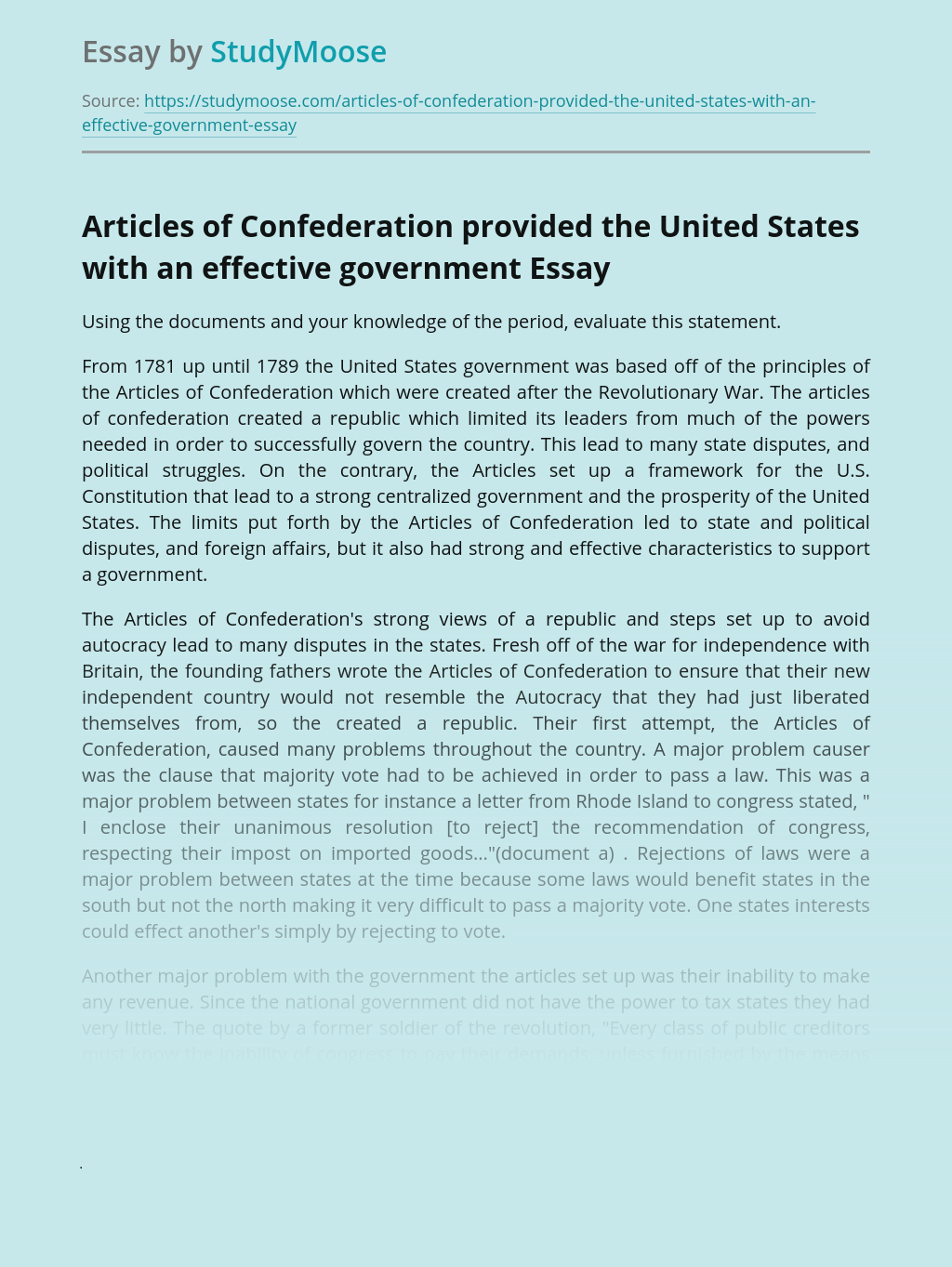 Turn in your highest-quality paper
Get a qualified writer to help you with
“ Articles of Confederation provided the United States with an effective government ”
Get high-quality paper
Helping students since 2015
Stay Safe, Stay Original