In this essay I am going to analyse the dramatic techniques that Arthur Millar uses in his 20th century drama called, ‘A View From The Bridge. ‘ The play is set in Brooklyn in the 1940’s when the Italians were immigrating to America to find work as they were poor and they needed to get away from Italy to find work to feed their families in Italy. Many of these immigrants entered America Illegally. The play is about a skilled docks worker in Brooklyn named Eddie Carbone.

Don't use plagiarized sources. Get your custom essay on
“ Arthur Millar ”
Get custom paper
NEW! smart matching with writer

Eddie lives with his wife Beatrice and their niece, Catherine.

Beatrice’s cousins named Marco and Rodolfo come to America from Italy to find work to feed Marco’s family in Italy, as they are very poor. They plan to enter illegally. Eddie has feelings for his niece Catherine that he should not have. Meanwhile Catherine falls in love with Rodolfo and Eddie hates him because he is jealous as he loves her and he cannot stand any other man looking at her and touching her.

As a result Eddie decides to let the Immigration Bureau know that there are illegal immigrants in his building.

In the play, Arthur Miller uses a number of dramatic devices many of which are seen in the first act but their significance only becomes apparent to the audience in the second act. These dramatic devices are: use of language, dialogue and its sub textual meanings, stage directions, characters’ actions, props and lighting. The first dramatic technique I am going to analyse is the use of language in Alfieri’s speech at the start of the play.

Miller has put this at the start of the play to prepare the audience for what will happen later on in the play.

The speech starts to develop tension because there are a lot of negative and violent words used. For example, Alfieri uses terms such as ‘Machine Gun. ‘ The effect of using a term like this is to create tension for the audience, as they now know that something bad is going to happen later on in the play. As the play progresses the audience realise that this is the only time when Alfieri uses negative and violent language. So his words take on a deeper meaning when the audience realises this. I am now going to look at Eddie’s language in the first act.

His speech is simple but at the start of the play his words are more vibrant towards Catherine as he tells he that she is “walking wavy. ” At the same time he also refers to her as a “Madonna. ” This gives the audience the idea that she is pure and she is a virgin and Eddie wants her to stay as she is. ” Listen, B. , she’ll be with a lot of plumbers? And sailors up and down the street? ” This illustrates Eddie’s feelings for Catherine and it can also mean that he does not want any other men looking at Catherine or marrying her.

Eddie’s dialogue changes when the cousins arrive. He uses working class American colloquial words, such as “Yiz have a nice trip? ” when he asks the cousins Marco and Rodolfo about their journey. Eddie wants to make it clear that he is the man of the house and that he is in charge. These expressions are only used in the first act when he is speaking to Marco and Rodolfo. This builds tension because the audience know that Eddie is going to start trouble with Marco and Rodolfo later on. 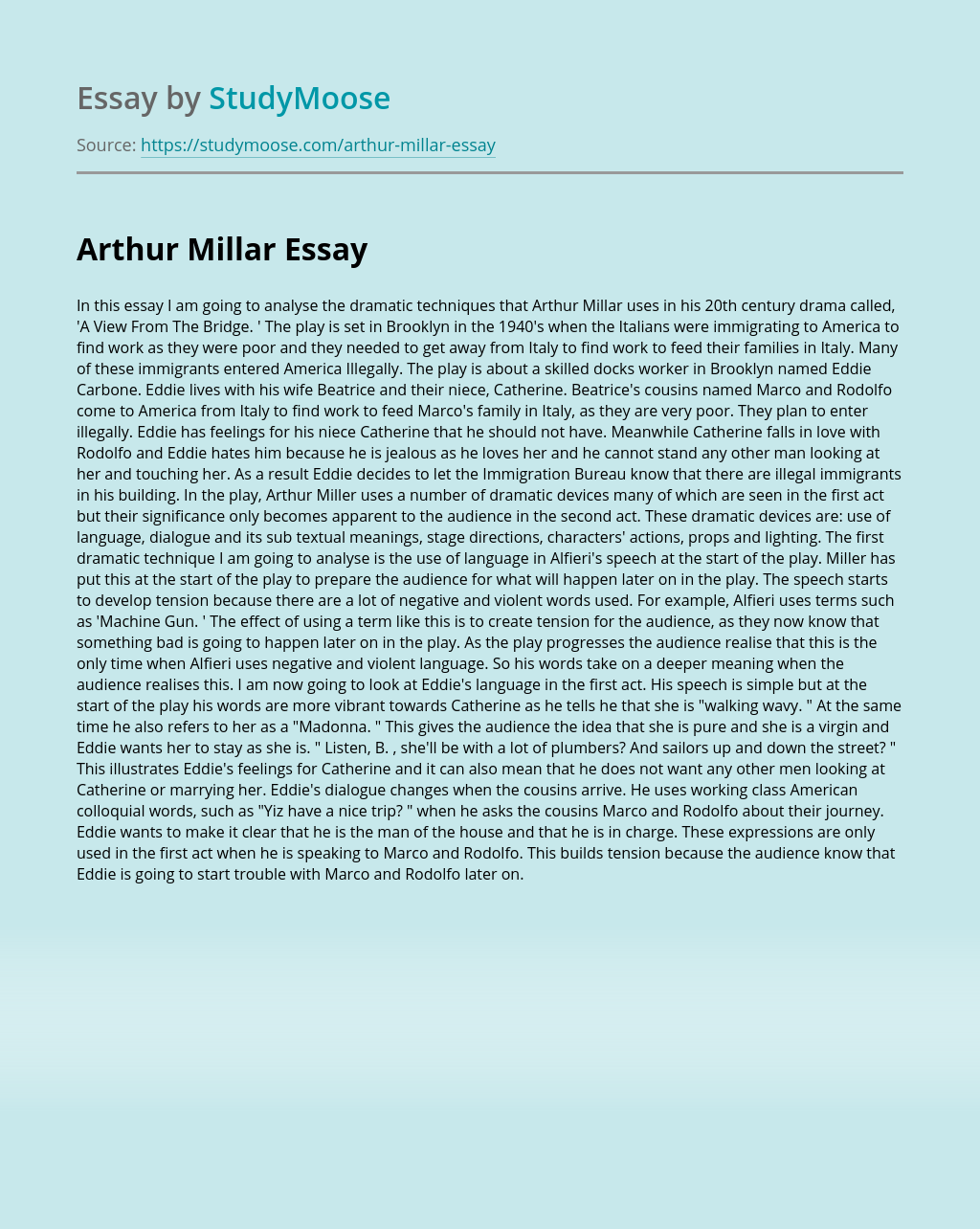