Saudi Arabia controls the movement of the women population greater than any other country. Passports or travel outside of the country are not approved for women unless they have permission from their male guardian. In addition, some guardian’s will prevent a woman from leaving their home, in which they can pursue getting a court order for the woman to go back home. On June 24, 2018, women gained the right to drive in Saudi Arabia. Travel restrictions make it challenging for women to permanently leave the country.

Don't use plagiarized sources. Get your custom essay on
“ Arranged Marriage in Saudi Arabia ”
Get custom paper
NEW! smart matching with writer

Many women who wish to flee either end up hacking into their male guardian’s phone to adjust their travel permission settings or run away while outside the country on vacation.

In Saudi Arabia, authorities restrict a woman’s capacity to marry freely by demanding her to get permission of a male guardian. Before marrying, it is mandatory that both the woman and her male guardian sign the marriage contract. In comparison, polygamous are legally recognized in Saudi Arabia, therefore men can be married to four women at once.

In addition, there is no minimum age for marriage in Saudi Arabia. There are rare reports of arranged child marriages, such as girls as young as eight.

Many women in Saudi Arabia experience domestic violence in their life. The Ministry of Labor and Social Development reported that there were 8,016 cases of physical and psychological abuse in a year, which usually occurred between spouses. On August 26, 2013, Saudi Arabia’s Council of Ministers passed a draft law criminalizing domestic abuse, but activists have judged the lack of implementation of the law.

According to Saudi Arabia’s National Family Protection Program they estimate that 35 percent of Saudi women have experienced violence in their life. The use of guardianship makes it extremely troublesome for victims to find protection or legally change their guardian. Moreover, women who try to leave an abusive husband or family can be arrested and returned to their families. If these women leave or are forced into a shelter, they are legally not able to leave unless they make peace with family members or agree to an arranged marriage. These shelters do not give women to live freely.

Right to divorce is much more complicated and restricted for women than it is for men. The man does not need to inform his wife that he is working on divorcing her, nor does she be in court for her husband to do such action. In January 2019, Saudi Arabian courts started to notify women by text message when their husbands have been granted divorces under a law that took. The initiative is aimed at concerns that Saudi men were increasingly neglecting to inform their wives on such matters. After a divorce, courts may allow children to live with their mothers, but women have no right to be their children’s legal guardian. It is reported that girls at age seven are usually moved to live with the father and boys may decide at age nine which parent they want to live with.

In 2014, the authorities issued a positive ruling that when children are ordered to live with their mothers after divorce, she can obtain documents and conduct government business for them. The decision enabled women to register their children in schools, take them to health centers, and obtain identity documents for them. Fathers, however, maintain the right to grant travel permission for children or to authorize daughters’ marriages.

In matters of inheritance, as in most Muslim-majority countries, women are only entitled to inherit half of what male heirs inherit. 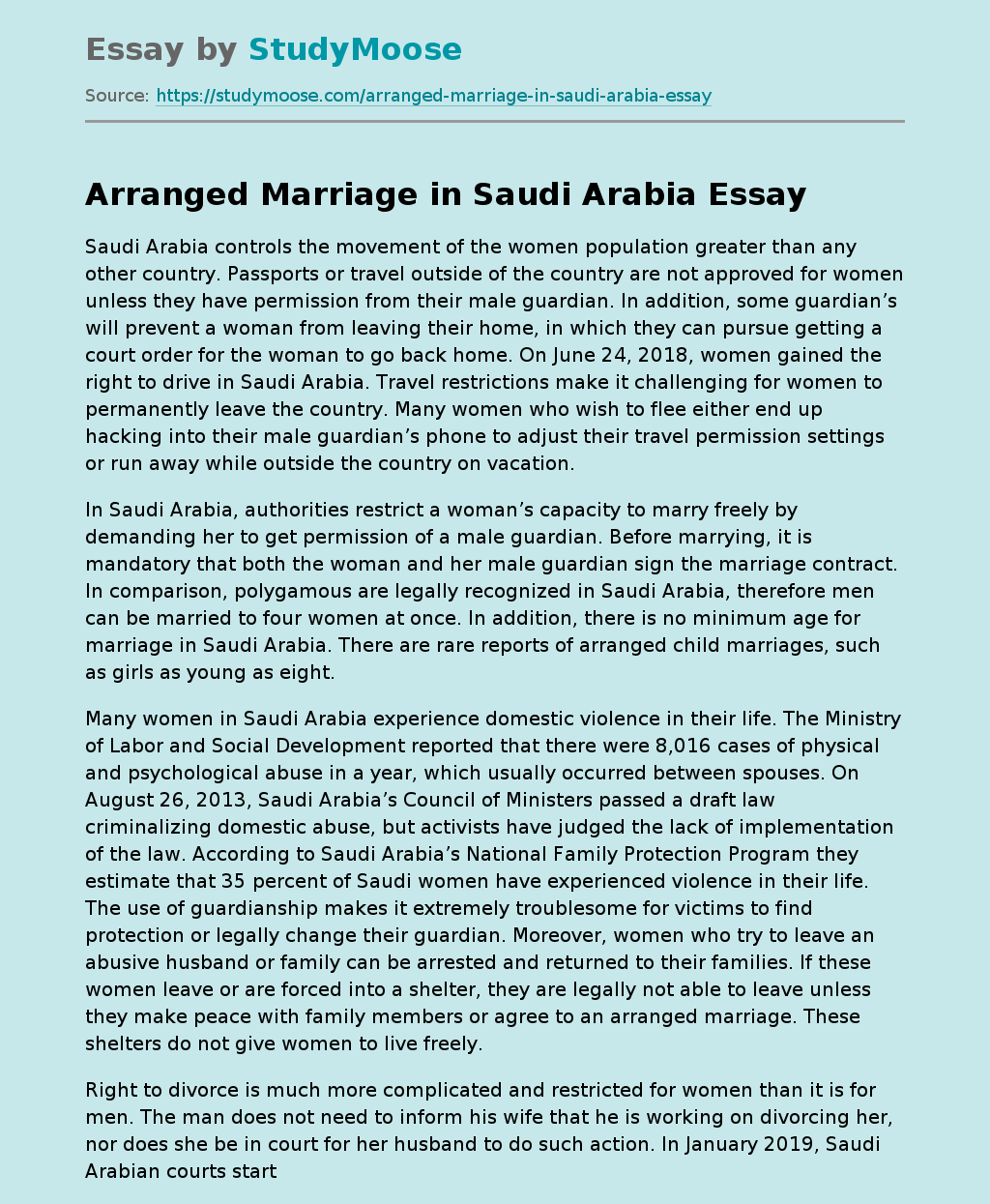