Don't use plagiarized sources. Get your custom essay on
“ Army Values Ldrship ”
Get custom paper
NEW! smart matching with writer

We are also taught things such as common courtesies.

Things that you would think most people knew how to do already…but with the way society is today, its not surprising it takes the United States Army’s extra kick in the pants to get you on track every once in a while. Especially the newer soldiers. In the United States Army, we have certain rules and regulations that we live by each and everyday of our lives. There is a few simple ways to remember all these rules and regulations all jumbled up into one little acronym.

(LDRSHIP) Let me tell you a little more about this acronym, and what each letter means so you yourself can better understand where the Army is coming from in all of this long worded acronym stuff.

Many people might think that they know what the words Loyalty, Duty, Respect, Selfless Service, Honor, Integrity, and Personal Courage mean. But how often do you see someone actually live up to them? That’s because most people don’t understand the definitions of these words enough to actually incorporate them into their everyday life style.

Soldiers learn these values in detail during Basic Combat Training (BCT), from then on they are supposed to be living them every day in everything they do, whether they’re on the job or off the job. Im going to give you the definitions of these seven core Army values below and include a short example for them so you can better understand them, and maybe help others to understand them as well.

Loyalty Bear true faith and allegiance to the U.S. Constitution, the Army, your unit and other Soldiers. Bearing true faith and allegiance is a matter of believing in and devoting yourself to something or someone. A loyal Soldier is one who supports the leadership and stands up for fellow Soldiers. By wearing the uniform of the U.S. Army you are expressing your loyalty. And by doing your share, you show your loyalty to your unit. (Example)—Lets say a soldier is out of uniform walking down the street in the middle of the night.

He notices some people outside of a corner bar starting to fight. This soldier wasn’t the biggest soldier in the world, so he really didn’t want to get in this fight and try to stop it. As he is walking by just trying to hurry along, he sees that one of the men fighting is a guy from his unit. Still not wanting to jump in and stop it, he knows he has to. So he does. This is showing your allegiance to your fellow soldiers. No matter how scared he was, he still decided that he had to have his back at least enough to stop the fight.

Duty Fulfill your obligations. Doing your duty means more than carrying out your assigned tasks. Duty means being able to accomplish tasks as part of a team. The work of the U.S. Army is a complex combination of missions, tasks and responsibilities, all in constant motion. Our work entails building one assignment onto another. You fulfill your obligations as a part of your unit every time you resist the temptation to take “shortcuts” that might undermine the integrity of the final product. (Example)—Lets say you are asked to stay after work and help clean, well everyone knows that cleaning at the end of the work day sucks because everyone just wants to go home and is tired of being at work. Its your duty to do so, so faking an injury, or faking sick, or faking that you have an appointment really wouldn’t be doing your duty. And from what I’ve seen, it happens, even NCO’s do it. Its sad, but it does happen. So staying and working through the suck, would be an example of duty.

Respect Treat people as they should be treated. In the Soldier’s Code, we pledge to “treat others with dignity and respect while expecting others to do the same.” Respect is what allows us to appreciate the best in other people. Respect is trusting that all people have done their jobs and fulfilled their duty. And self-respect is a vital ingredient with the Army value of respect, which results from knowing you have put forth your best effort. The Army is one team and each of us has something to contribute. (Example)—Lets say that another soldier has been in a really bad mood all day, and is yelling at people, and being unproductive, and calling you names. Even if they’re being crumby doesn’t mean you need to be. Like it says above “Treat people as they should be treated”. So in this situation, you continue to be nice, no matter how they are treating you.

Selfless Service Put the welfare of the nation, the Army and your subordinates before your own. Selfless service is larger than just one person. In serving your country, you are doing your duty loyally without thought of recognition or gain. The basic building block of selfless service is the commitment of each team member to go a little further, endure a little longer, and look a little closer to see how he or she can add to the effort. (Example)—Lets say you are finished working in the bay, and everyone is told they can go home for the day. But you notice that the bay hasn’t been swept or picked up in the last couple days, so you decide to stay and do it before ending your day. That is an example of selfless service.

Honor Live up to Army values. The nation’s highest military award is The Medal of Honor. This award goes to Soldiers who make honor a matter of daily living — Soldiers who develop the habit of being honorable, and solidify that habit with every value choice they make. Honor is a matter of carrying out, acting, and living the values of respect, duty, loyalty, selfless service, integrity and personal courage in everything you do. (Example)—Hold your head high, no matter what you are going through. Be proud to put on your uniform everyday, and also of whom you are and where you came from. Always do the right thing. Simple as that.

Integrity Do what’s right, legally and morally. Integrity is a quality you develop by adhering to moral principles. It requires that you do and say nothing that deceives others. As your integrity grows, so does the trust others place in you. The more choices you make based on integrity, the more this highly prized value will affect your relationships with family and friends, and, finally, the fundamental acceptance of yourself. (Example)—Lets say you are about to leave work, and you’re just about to get into your car when you notice a $20 bill on the ground next to the drivers door of the car next to you. You know its not yours but you have really been struggling on cash lately. Deciding to give it to the owner is the right thing to do.

Personal Courage Face fear, danger or adversity (physical or moral). Personal courage has long been associated with our Army. With physical courage, it is a matter of enduring physical duress and at times risking personal safety. Facing moral fear or adversity may be a long, slow process of continuing forward on the right path, especially if taking those actions is not popular with others. You can build your personal courage by daily standing up for and acting upon the things that you know are honorable. (Example)—This goes back to our example earlier of the soldier walking the streets at night and stopping that bar fight that his fellow soldier was in. Deciding to jump in and stop it was scary for him because if you recall he wasn’t the biggest soldier in the world. So he had to find the courage inside himself to do so. That’s personal courage

These are the seven core Army values. I hope after all of this reading and examples that you now better understand these than when you first started reading. We soldiers have to live this day to day, on or off the job. It’s a part of life, the Army life, our life. 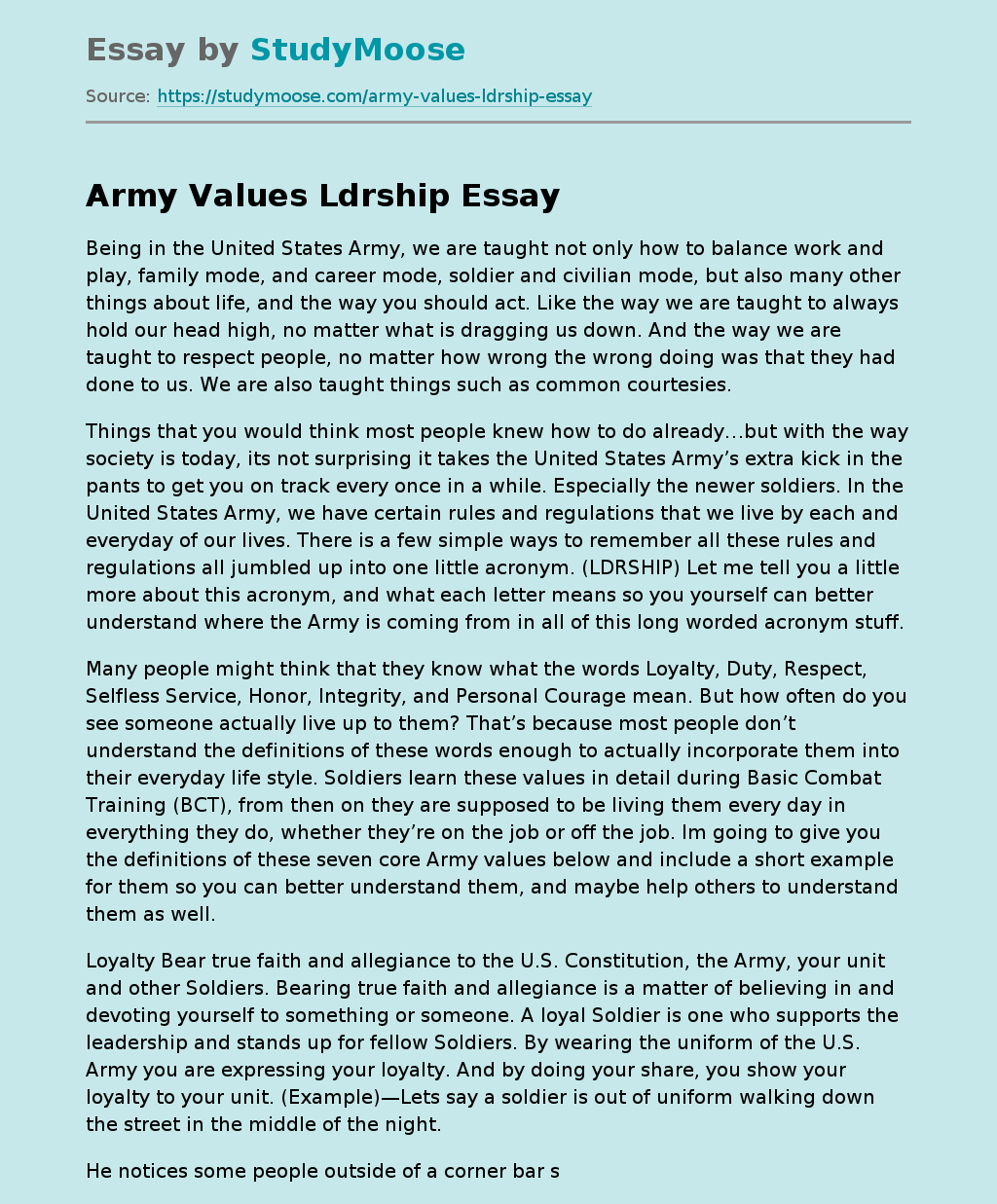