Arguments for and against euthanasia and assisted suicide

There are two main types of argument used to support the practices of euthanasia and assisted suicide. They are the: ethical argument – that people should have freedom of choice, including the right to control their own body and life (as long as they do not abuse any other person’s rights), and that the state should not create laws that prevent people being able to choose when and how they die pragmatic argument – that euthanasia, particularly passive euthanasia, is already a widespread practice (allegedly), just not one that people are willing to admit to, so it is better to regulate euthanasia properly The pragmatic argument is discussed in more detail below.

Don't use plagiarized sources. Get your custom essay on
“ Arguments for and against euthanasia and assisted suicide ”
Get custom paper
NEW! smart matching with writer

For example, there is the practice of making a ‘do not attempt cardiopulmonary resuscitation’ (DNACPR) order, where a person requests not to receive treatment if their heart stops beating or they stop breathing. Critics have argued that DNACPR is a type of passive euthanasia because a person is denied treatment that could potentially save their life. Another controversial practice is known as palliative sedation.

This is where a person who is experiencing extreme suffering, for which there is no effective treatment, is put to sleep using sedative medication. For example, palliative sedation is often used to treat burns victims who are expected to die. While palliative sedation is not directly carried out for the purpose of ending lives, many of the sedatives used carry a risk of shortening a person’s lifespan.

Therefore, it could be argued that palliative sedation is a type of active euthanasia. The pragmatic argument is that if euthanasia in these forms is being carried out anyway, society might as well legalise it and ensure that it is properly regulated. It should be stressed that the above interpretations of DNACPR and palliative sedation are very controversial and are not accepted by most doctors, nurses and palliative care specialists. Read more about the alternatives to euthanasia for responses to these interpretations. Arguments against euthanasia and assisted suicide

There are four main types of argument used by people who are against euthanasia and assisted suicide.

They are known as the: religious argument – that these practices can never be justified for religious reasons, for example many people believe that only God has the right to end a human life ‘slippery slope’ argument – this is based on the concern that legalising euthanasia could lead to significant unintended changes in our healthcare system and society at large that we would later come to regret medical ethics argument – that asking doctors, nurses or any other healthcare professional to carry out euthanasia or assist in a suicide would be a violation of fundamental medical ethics alternative argument – that there is no reason for a person to suffer either mentally or physically because effective end of life treatments are available;

therefore, euthanasia is not a valid treatment option but represents a failure on the part of the doctor involved in a person’s care These arguments are described in more detail below.

Religious argument
The most common religious argument is that human beings are the sacred creation of God, so human life is by extension sacred. Only God should choose when a human life ends, so committing an act of euthanasia or assisting in suicide is acting against the will of God and is sinful. This belief, or variations on it, is shared by members of the Christian, Jewish and Islamic faiths.

The issue is more complex in Hinduism and Buddhism. Scholars from both faiths have argued that euthanasia and assisted suicides are ethically acceptable acts in some circumstances, but these views do not have universal support among Hindus and Buddhists. ‘Slippery slope’ argument

The slippery slope argument is based on the idea that once a healthcare service, and by extension the government, starts killing its own citizens, a line is crossed that should never have been crossed and a dangerous precedent has been set. The concern is that a society that allows voluntary euthanasia will gradually change its attitudes to include non-voluntary and then involuntary euthanasia. Also, legalised voluntary euthanasia could eventually lead to a wide range of unforeseen consequences, such as those described below. Very ill people who need constant care or people with severe disabilities may feel pressured to request euthanasia so that they are not a burden to their family.

Legalising euthanasia may discourage research into palliative treatments, and possibly prevent cures for people with terminal illnesses being found. Occasionally, doctors may be mistaken about a person’s diagnosis and outlook, and the person may choose euthanasia due to being wrongly told that they have a terminal condition. Medical ethics argument

The medical ethics argument, which is similar to the ‘slippery slope’ argument, states that legalising euthanasia would violate one of the most important medical ethics, which, in the words of the International Code of Medical Ethics, is: ‘A doctor must always bear in mind the obligation of preserving human life from conception’. Asking doctors to abandon their obligation to preserve human life could damage the doctor–patient relationship. Causing death on a regular basis could become a routine administrative task for doctors, leading to a lack of compassion when dealing with elderly, disabled or terminally ill people.

In turn, people with complex health needs or severe disabilities could become distrustful of their doctor’s efforts and intentions. They may think that their doctor would rather ‘kill them off’ than take responsibility for a complex and demanding case. Alternative argument

The alternative argument is that advances in palliative care and mental health treatment mean there is no reason why any person should ever feel that they are suffering intolerably, whether it is physical or mental suffering or both. According to this argument, if a person is given the right care, in the right environment, there should be no reason why they are unable to have a dignified and painless natural death.

Arguments for and against euthanasia and assisted suicide. (2016, May 22). Retrieved from https://studymoose.com/arguments-for-and-against-euthanasia-and-assisted-suicide-essay 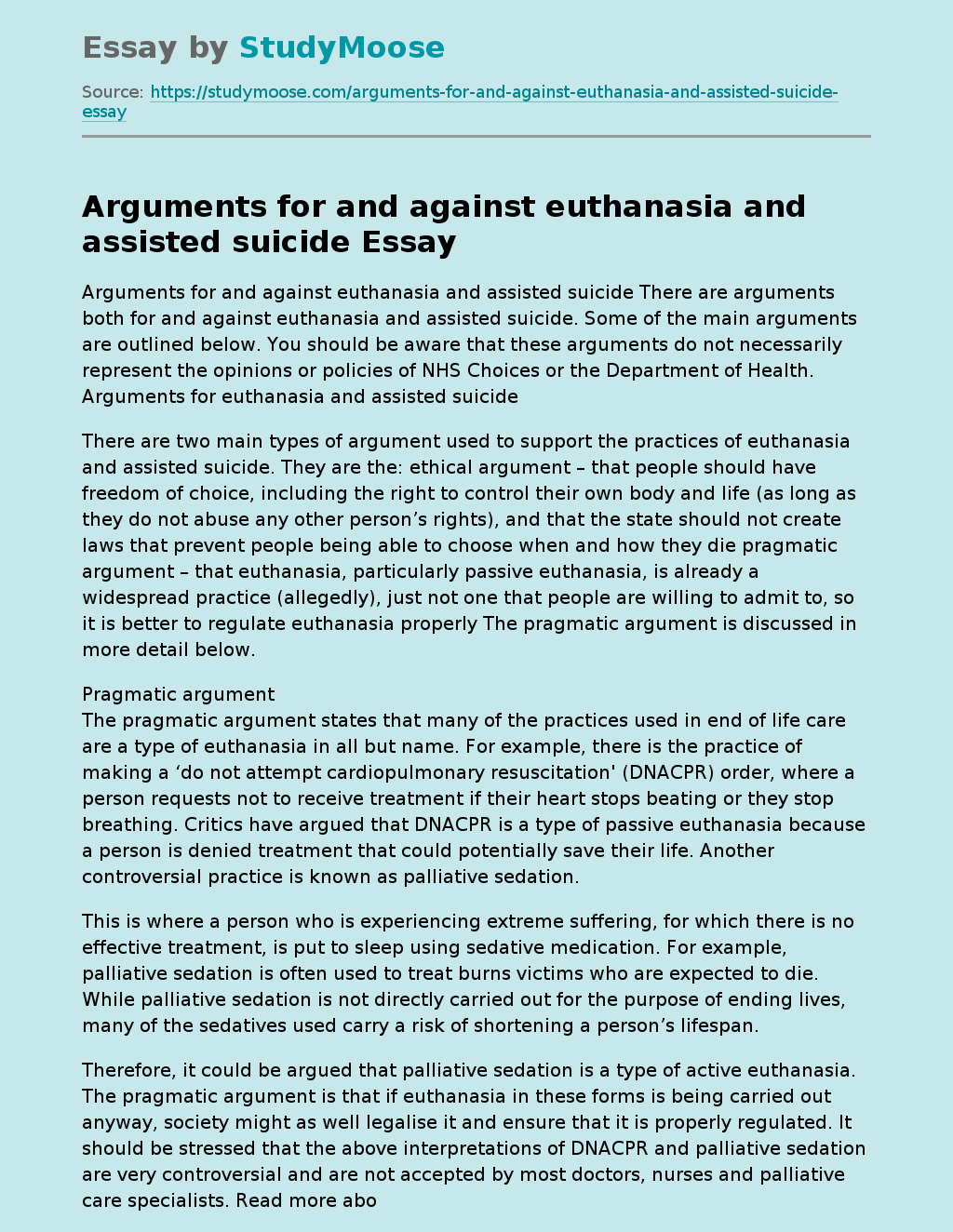