Animals are abused every day

100,000 animals are abused each and every day. This issue occurs on a daily basis all around the world. According to the Humane Society “Unlike violent crimes against people, cases of animal abuse are not compiled by state or federal agencies, making it difficult to see just how common they are” (Humane Society). Many states have little to no laws against animal cruelty, and this is one of the many problems that are present. Problems include the funding of laws that are being put aside to take other laws more seriously, the act of putting animals in danger, and overall not caring of the wellbeing of animals.

Don't use plagiarized sources. Get your custom essay on
“ Animals are abused every day ”
Get custom paper
NEW! smart matching with writer

I feel that more solutions should take place in order to resolve the problem of the endangerment of animals’ lives.

Let’s start out by discussing that the laws that are put in place now, are not helping with the decrease of animal abuse. States including Idaho, Mississippi, Hawaii, Kentucky, and North Dakota don’t consider animal cruelty as a felony.

Proficient in: Animals Cry For Help

For instance, the penalty for animal abuse in Mississippi is “a fine of between $10 and $100 or jail time for between 10 and 100 days” (NBC News). Since people know that the reactions are minor and won’t affect them as much as another crime would, they don’t see a problem in committing animal neglect. Kentucky’s vets are also not allowed to report animal abuse if they suspect anything is wrong. For human protection against animal laws, Kentucky goes soft on crimes towards animal abuse, “When animal issues come up, they tend to be put on the back burner in favor of human issues” (NBC News).

Laws should be obligated to become stricter and force harder consequences upon them.

People are noticing that Most laws are giving no justice and using groups to fund the money for new laws against animal cruelty. Many fundraisers such as the Cruelty-Free international are working to ban all animal laboratory research, “one of the most important jobs the Cruelty-Free International science team does is encourage regulators to accept and promote alternative methods to animal testing” (CFI). Removing animals from the risk of death by testing unknown products on them is a considerable way of showing people to use their own money to save animal lives and still get the research they need but by a different approach. One of the largest US animal rights groups is The Humane Society, and they believe they should stand up and fight for every animal in suffering. The THS is trying to pass an act called, The Preventing Animal Cruelty and Torture (PACT) Act, this “will make it a federal crime to commit malicious cruelty to an animal on federal property or in interstate commerce” (Humane Society). People can now call this line and donate money to get this act put in place.

Animals are tortured in many ways other than domestic violence. One of the greater ways animals are put at risk is the act of dogfighting. Dogfighting is defined as a sport in which dogs are put in a group with other dogs and are trained to harm their competition for profit of what dog will stay alive. As reported by the Astronomical Society of the Pacific Conference Series “Fighting dogs are typically raised in isolation, so they spend most of their lives on short, heavy chains” (ASPCA). Instead of living in a loving home, these dogs are being treated as their owners one way to get money is by initially killing the dogs. A lot of the dogs that are bred today come from puppy mills. Puppy mills are an establishment that thousands of dogs are bred inhumane conditions. The Puppy Mill Project found “It is common to see wire cages stacked on top of each other. They generally do not have protection from heat, cold, or inclement weather” (PMP). This is no way to treat the caged animals, who are being reproduced to live in caring homes.

Animals talking would make the world a whole lot easier. We don’t know what animals are feeling or thinking, so it’s up to us to help them out when we see something off about them. Many solutions to decreasing the percentage of animal abuse is as easy as trying to report what is happening to the nearest shelter. The Georgia SPCA gives us ways to make your case clearer, “When you make the call, tell the person as many details of the situation as you can—i.e., the location, date and time, and descriptions of the people and animals involved. Video and photographic documentation (even a cell phone photo) can help bolster your case” (SPCA). Being specific when giving information is very important so the problem can be taken care of quickly and as best as possible. To stop animal abuse from spreading we have to end it from the start. We should be able to educate the problem to other people right away. Once people are more aware of it then it would be less likely to happen.

As you can see the pattern here, is all around the world people are not caring about the well-being of abused animals. That’s why when you see something that doesn’t seem right, it’s important to call someone right away. “That’s why animals rely on you to protect them by reporting animal abuse” (Humane Society), Most people will think its not their problem to go help, but that just makes the situation worse. A lot of times if you see an animal getting abused more problems are going on in the house. Helping the animals that are being treated cruelly could also help more cases of abuse go inside peoples lives. According to the Animal Law and History Center, “It is likely that if an animal is being abused, a child or partner in the household also is being abused” (Mellissa Trollinger). Not only would decreasing animal abuse help the pets but also people in a household.

In conclusion, the actions that are being taken against animal abuse is not enough to end it. Multiple people have no shame in hurting animals because they think they don’t matter. There is a lot of use for animals that help us and taking their lives doesn’t do anything useful for us.

Animals are abused every day. (2021, Dec 02). Retrieved from https://studymoose.com/animals-are-abused-every-day-essay 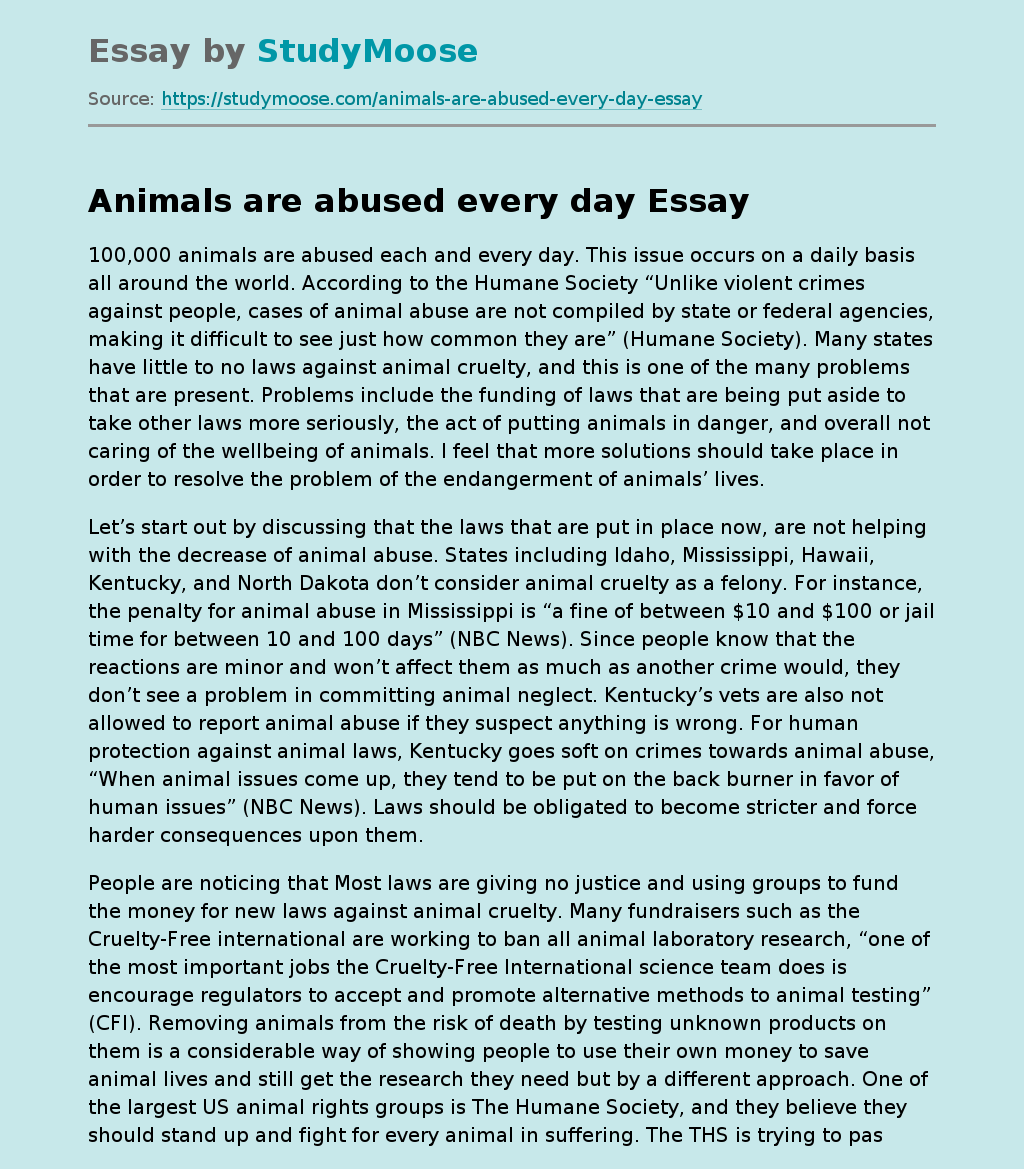